You may be kidding yourself when it comes to how good you are – or a potential partner is – in bed, a new survey reveals.

Researchers polled 1,000 US men and women, and found they routinely assumed the people they were most attracted to had fewer sexually transmitted diseases (STDs) and were more sexually skilled.

Reviewing themselves, a whopping 75 percent said they believed they are better than average in bed.

But that’s not all we overestimate. Both men and women surveyed – all heterosexual – said that they believe the length of their penis or their partner’s penis was larger than the size of the average penis.

The team, from Bad Girls Bible – a website that provides weekly guides on sex and relationships – says the findings show that our brains ‘use faulty evidence and wishful thinking’ when it comes to whom we choose to date and sleep with.

A new survey has found that 75 percent of us believe we’re better than average in bed with men scoring themselves around 7.0 and women around 6.6 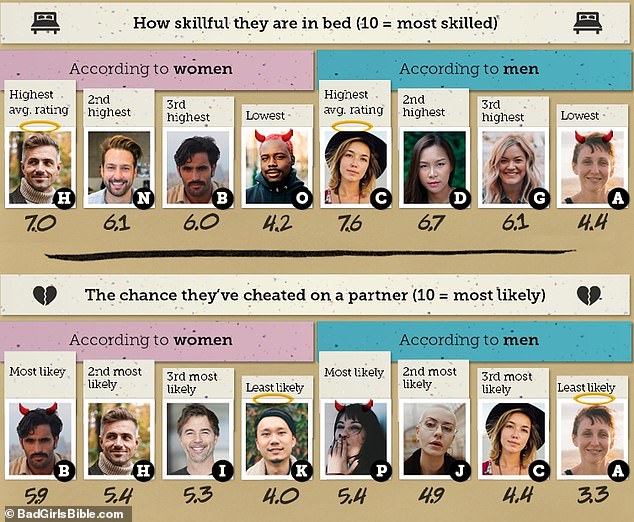 After viewing strangers’ faces, men and women said the face rated the most attractive was likely the most skillful in bed, least likely to have STDs and among the most likely to cheat

All the participants identified themselves as heterosexual and being sexually active with a partner of the opposite sex in the last year.

The men and women were told the survey was about opinions and attitudes regarding sex and relationships rather sex biases.

Among several topics, researchers looked at what they referred to as the ‘halo and horn’ effect.

Past studies have shown that, generally, we assume physically attractive people are happier, intelligent and have more beautiful children.

Female participants were shown eight random male faces, and men were shown the same number of female faces, and they were asked to rate their attractiveness, sexual skills, likelihood of having an STD and if they believed they ever cheated.

Surprisingly, the faces that were deemed most attractive were also selected as the least likely to have STDs.

‘The fact that our research showed that people assume good looks equal lower STD rates is alarming because there’s no evidence to shower better-looking people are less likely to have STDs,’ lead researcher and sex expert Sean Jameson told DailyMail.com.

‘But previous research has shown that men are less likely to choose to use a condom when having sex with women they find more attractive. This means our assumptions about others could be tempting us into risky sexual situations.’ 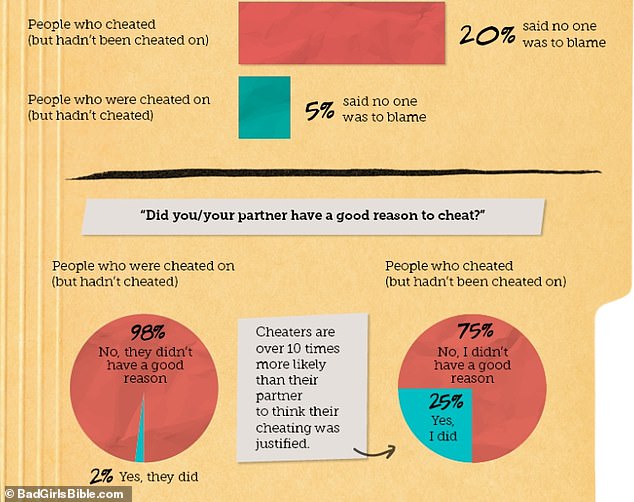 Two percent of people who were cheated on said their partner had a ‘good reason’ to cheat, compared to 25 percent of cheaters

Results were less clear-cut when it came to cheating, but respondents did rate men and women that they found the most attractive to be among the most likely to cheat.

Past research has shown that men view more physically attractive women to have been more promiscuous in the past, which could explain why they paired cheating with attractiveness.

Researchers also took the opportunity to ask questions about cheating in relationships.

Of the participants, nearly a quarter admitted to cheating on a partner and about 20 percent said they had been cheated on.

Just two percent of people who were cheated on said their partner had a ‘good reason’ to cheat, compared to 25 percent of cheaters.

‘Many of the unfaithful partners we spoke to admitted that what they did was wrong, but nevertheless said they were justified in doing it,’ Jameson said.

‘However, people who are cheated on are often oblivious to the private motivations of their unfaithful partners, which makes it extremely difficult to empathize with their reasons for breaking the social contract through cheating. ‘

One of the more interesting aspects of the report was that both men – and women – overestimate penis size.

The average length of the men in the survey was 6.22 inches, while they guessed that the average man’s was 5.67 inches – more than half an inch shorter.

Women, meanwhile, guessed that the average man’s penis was 5.55 inches long while the average of their last sexual partner was about 6.22 inches.

The authors boil it down to something called egocentric bias, or when we put ourselves in a favorable light to protect our self-esteem.

Meanwhile, a 2015 study from the Institute of Psychiatry, Psychology and Neuroscience in London found the average penis length is 5.16 inches – an inch shorter than the self-reported lengths.

It’s unclear why women overestimated considering past research has found that men consider girth to be more important than length when it comes to pleasure.

But around 45 percent of men wish their penis was larger, scientists from UCLA found, which could be why men were inclined to give themselves an extra half-inch.

The authors said it may also be that men with larger penises are more confident.

Turns out penis size isn’t the only thing we overrate.

A shockingly high 76 percent rated their sexual skills as higher than the average person, with men scoring themselves around 7.0 and women around 6.6.

This bias is known as illusory superiority, which is when we overestimate our own desirable personal characteristics.

‘To believe you’re average, or even sub-par, in the bedroom could be highly demotivating to your dating life,’ Jameson said.

‘However, believing you’re above average could provide the motivation needed to go on a date and take your chances. This is a case where believing something that’s not true could help you more than knowing the truth – a kind of self-fulfilling prophecy.’

How TikTok could help you survive the Covid-19 lockdown

Tylenol may make you less empathetic to others’ happiness