Arnott’s has released its secret recipe for its iconic Iced VoVo biscuits.

Australian home bakers will be able to make the classic delectable treat in their own kitchen – but with a special Mother’s Day twist.

The treasured biscuit has been a family favourite since 1906, and it’s topped with pink fondant, a strip of jammy raspberry filling and a sprinkling of desiccated coconut.

Scroll down for recipe 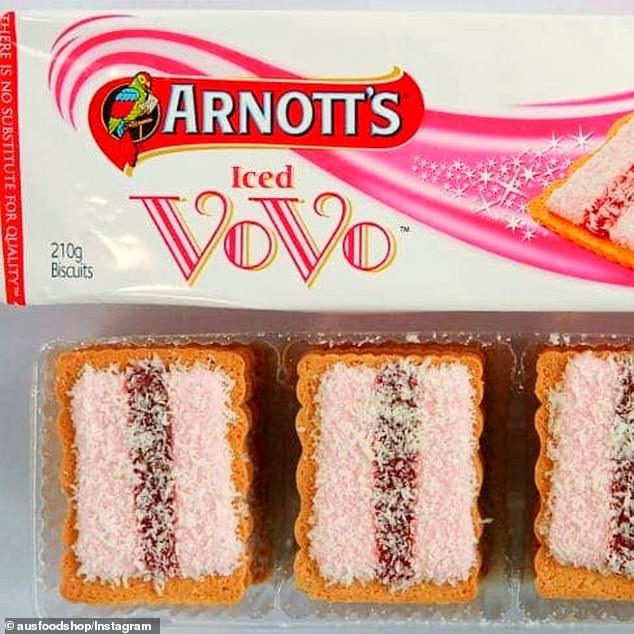 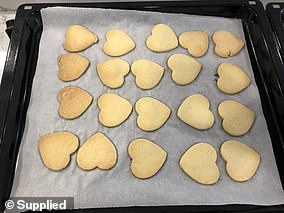 Using a 6cm heart shaped cutter, cut out biscuits, transfer to baking sheets. Bake for 16-18 minutes or when biscuits start to turn golden. Leave on the tray to cool 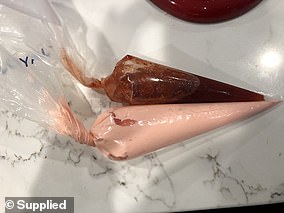 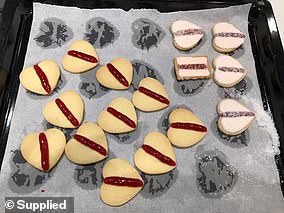 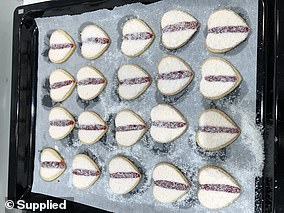 Sprinkle with coconut. Place iced biscuits in a single layer of an airtight container to set overnight

2. Using an electric mixer, beat the butter, icing sugar, and salt for two minutes or until pale and creamy. Sift the flour into the butter mixture and mix on low speed until combined.

4. Bake for 16-18 minutes or when biscuits start to turn golden. Leave on the tray to cool.

1. Place egg white in a clean mixing bowl and mix on low speed with the whisk attachment until the whites begin to break up. Gradually add the icing sugar, vanilla and glucose, whisking until combined and glossy. If the mixture is too stiff add a teaspoon of water to loosen it up but ensure it isn’t too runny as it will slide off the biscuit. It should form a smooth surface. Add your colour and stir until combined. Cover surface of icing with cling wrap until ready to use to prevent the icing going hard.

2. Place a small round tip (we used a No. 2 nozzle) and fill your piping bag 1/3 full of icing. Don’t overfill your bag. Fill another piping bag with raspberry jam.

3. Pipe a jam strip down the centre of the heart biscuit and pipe pink icing around the edges before filling in the remainder of the heart with icing.

4. Sprinkle with coconut. Place iced biscuits in a single layer of an airtight container to set overnight.

Arnott’s chef Vanessa Horton has adapted the recipe for home bakers so Aussies can create decadent Iced VoVo inspired biscuits in the shape of a love heart – a perfectly delicious homemade gift for any mum.

‘Arnott’s Iced VoVo holds a special place in many Australians’ hearts which led us to this unique twist for Mother’s Day,’ Ms Horton said.

‘We hope this recipe inspires people to bake for (or with) the mum in their life this weekend, whether it’s in person or over a virtual video chat.’

The treats can be made in less than 30 minutes to prepare and bake in the oven.

The treasured biscuit has been a family favourite since 1906, and it’s topped with pink fondant, a strip of jammy raspberry filling and a sprinkling of coconut

To encourage Australians to stay at home, put on their aprons and bake together, Arnott’s will be sharing some of its secret biscuit recipes to the public every week.

‘We know how important our biscuits are to Australians, both locally and living abroad, in helping them come together with family and friends and feeling connected,’ Ms Horton said.

‘That’s why I’ve personally adapted and tested each of the “secret” recipes we’re revealing to the public, so they can find new ways to come together and share a biscuit, in this time of need.’

The decision to release the recipes comes in response to the social distancing regulations fuelling a 300 per cent spike in baking-related searches.

The report found the average Aussie household has stockpiled enough flour to last 65 days, and the volume of sugar purchases have increased by 65 per cent.