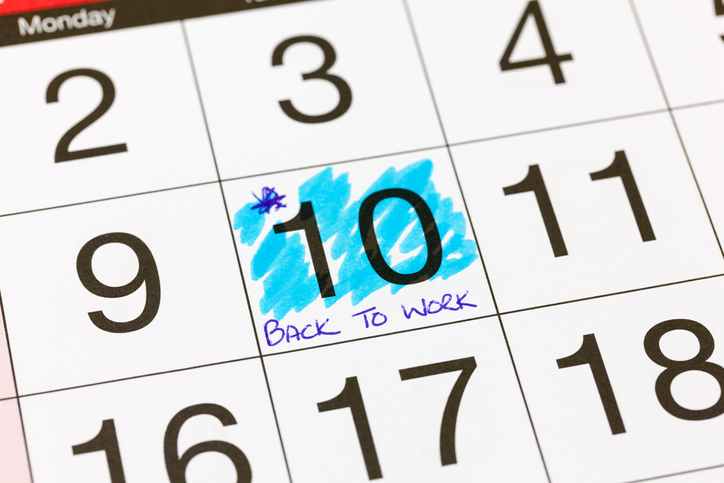 Along with widespread illness and death, the COVID-19 pandemic is also causing massive economic disruption. Stay-at-home measures and business shutdowns have prevented millions of people from working. In just four weeks, between mid-March and mid-April, 22 million Americans filed for unemployment benefits. These numbers are bound to spiral higher.

Given all the hardships — and new predictions that cases of COVID-19 will begin falling in most states in the coming weeks — when might people be able to return to work? Thus far, the answers are quite uncertain.

Although the Centers for Disease Control and Prevention (CDC) has issued some federal guidelines, you may need to follow stricter state or local regulations and employer policies. Some experts have suggested serologic (antibody) tests to determine who has had the virus and to guide decisions about returning to work. And the experiences of countries that have successfully slowed cases of COVID-19 and loosened restrictions on work will come into play, too. Below I’ve explained a bit about each approach.

Return-to-work recommendations from the CDC

As you might expect, there are caveats. As mentioned, local regulations or employer policies may be more stringent than these recommendations, so check with your employer and primary care physician before going back to work. And a disclaimer notes the guidelines “cannot prevent all instances of secondary spread.”

What about using serologic (antibody) tests to guide our return to work?

Serologic tests identify antibodies in your blood that your immune system produced to fight off the virus and to be ready in case you’re exposed to it again. If present, they indicate that you were previously infected, even if you were unaware of it. These tests are quite different from nasal swab testing performed to identify current infection.

If you never had symptoms or your symptoms completely resolved, a positive serologic test likely indicates that you have some protection from re-infection (for at least a while) and are unlikely to be contagious. So, positive results might let you know that it’s safe for you to return to work (and to be around others at home or work who may be susceptible to the virus).

Additionally, if your body made antibodies in high amounts, you may be a plasma donor candidate, as your antibodies could be used to help someone who is struggling to recover from COVID-19.

Sounds great, right? It is if you are feeling well and your serologic tests are positive. But what if they are negative? And what else do we need to consider?

A negative serologic test generally means you haven’t been exposed to the virus. So, congratulations, it seems you successfully avoided infection and were never a threat to spread it to others! On the other hand, you still may catch the virus from someone else. A negative result is not helpful in knowing when it’s okay to return to work or to relax certain physical distancing measures.

Until widespread serologic testing is performed, we won’t know how many people are already immune to the virus that causes COVID-19, but it’s possible that most people will have a negative result.

Why? For one thing, mitigation efforts seem to have been effective at limiting exposure. And while we tend to hear about the “hot spots” where infection is spreading rapidly, many areas of America and the world have had low infection rates.

In the US, projections in mid-April by the University of Washington suggest that we’ll have up to a million cases of confirmed COVID-19 by August 2020. If there are 10 times as many unconfirmed cases of COVID-19 as confirmed cases, as Angelo Borrelli, a government official in Italy, believes, another 10 million people were exposed to COVID-19, but were asymptomatic or never got tested. Given a US population of 330 million people, that means 3% may have positive antibodies and the remaining 97% of Americans may never have been exposed to the virus. All of the people who weren’t exposed would be expected to have negative serologic test results, which aren’t helpful in making decisions in the coming weeks and months about who can safely return to work.

Once enough people (perhaps 60% to 70% of the population) have protective antibodies due to infection or vaccination, there will be more confidence in the safety of returning to work. But a vaccine is a year or more away.

Where does this leave us in returning to work?

While there are no uniform guidelines to rely upon for most workers, here’s how some experts, public officials, and other countries have responded to the question of when employees might return to work:

“Reopening the economy” is likely something that will happen gradually, along with ongoing monitoring for renewed outbreaks. For example, restaurants and smaller offices might reopen at partial capacity, with employees hired back in gradually increasing numbers if all goes well. Later, sporting events and concert venues may reopen. This will probably vary by geography: areas with fewer cases of COVID-19 may ramp up toward higher employment levels more quickly than those hit hardest by the outbreak. As workers return to their jobs, many of the current precautions will likely remain in place, such as frequent disinfectant cleaning and avoiding unnecessary crowding and physical contact.

In the coming weeks and months, a drop in cases of COVID-19 is expected across the US, according to models from the University of Washington. Once that happens, public health experts and national, state, and local leaders will likely give the go-ahead for employers across many industries to gradually reopen, and employees will return to work. That could happen in some areas as soon as May or June.

But, the decision to allow businesses to reopen must be made despite considerable uncertainty: if businesses reopen too soon, the outbreak may flare up again. Wait too long and many businesses and the people who work in them may never recover financially.

Since you can’t return to your job until your place of work resumes operations, workers everywhere have to wait for that to happen. Even after it does, it may be a while before we know if it was too soon, too late, or the right move.

Stress may be getting to your skin, but it’s not a one-way street

The art of a heartfelt apology

How is treatment for myasthenia gravis evolving?

Do vitamin D, zinc, and other supplements help prevent COVID-19 or hasten healing?