Human trials of the experimental jab – called ChAdOx1 nCoV-19 – started last week and the first results are expected in mid-June.

If proven to protect against the deadly virus, the deal will allow the UK to access to the vaccine ‘as early as possible’, the university said today.

Details of the agreement – described by Health Secretary Matt Hancock as ‘hugely welcome news’ – are set to be finalised in the coming weeks.

Both partners said today that the venture was not-for-profit and only the costs of production and distribution would be covered.

Developing vaccinations can take up to a decade and scientists have said finding an effective jab within 18 months would be ‘unprecedented’.

But researchers across the world are hurtling towards the target, with more than 100 candidates in development and some already being trialled on humans. 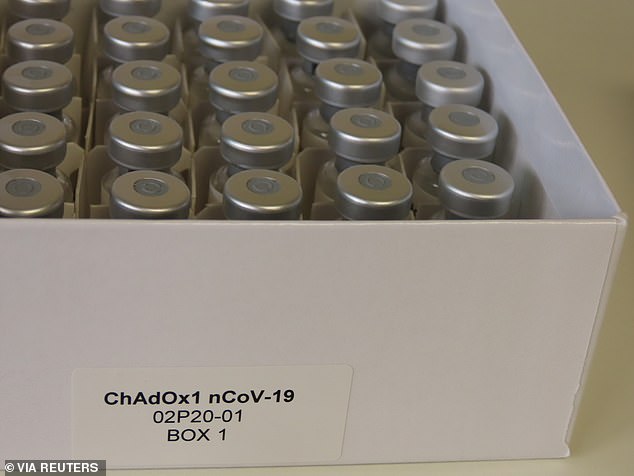 WHAT IS THE OXFORD VACCINE AND WHO CAN GET ONE?

The vaccine is called ChAdOx1 nCoV-19 and is made from a weakened version of a common cold virus (adenovirus) from chimpanzees that has been genetically changed so it is impossible for it to grow in humans.

The team have gone through stages of vaccine development that usually take five years in just four months.

They were a step ahead of other groups because they already had a base vaccine for similar coronaviruses.

The intellectual rights to its vaccine are owned by the University of Oxford and a spin-out company called Vaccitech.

The first part of the trial will involve 510 health volunteers aged between 18 and 55.

Then the trial will move into older age groups, looking at the safety and immune response to the vaccine.

Half of all the trial volunteers will get the new coronavirus vaccine and the other half will get a vaccine licensed to protect against meningitis. Volunteers will not know what they are given.

Speaking on BBC Radio 4’s Today programme, Professor Sir John Bell, of Oxford University, said he hoped that some results from a human trial of the vaccine would be available by the middle of June.

He told Today that the challenge now is to be able to manufacture at scale once it is approved by the regulators.

Sir John added: ‘We also want to make sure that the rest of the world will be ready to make this vaccine at scale so that it gets to populations in developing countries, for example, where the need is very great.

‘We really need a partner to do that and that partner has a big job in the UK because our manufacturing capacity in the UK for vaccines isn’t where it needs to be, and so we are going to work together with AstraZeneca to improve that considerably.’

It is the first such partnership to be formed since the Government launched the Vaccines Taskforce two weeks ago to help find a new coronavirus vaccine.

Both partners have agreed to operate on a not-for-profit basis for the duration of the pandemic, the university said, with only the costs of production and distribution being covered.

Health Secretary Matt Hancock said it was ‘hugely welcome news’ that Oxford University had come to an agreement with AstraZeneca to scale up its coronavirus vaccine.

He tweeted: ‘The Oxford vaccine is one of the most advanced in the world. Bringing together the best British science and the best of British business will give us the best possible shot at a vaccine.

‘The science is uncertain, and no vaccine may work, but this deal gives the UK the best chance we can of a breakthrough that could defeat this awful virus. I’m sending best wishes for good fortune to all involved – for the sake of the nation and indeed the whole world.’

It will contain a genetically-engineered virus to look like the coronavirus but be unable to cause any infection inside a person.

This virus is a type called an adenovirus, the same as those which cause common colds, which has been taken from chimpanzees.

If the vaccines can successfully mimic the spikes inside a person’s bloodstream, and stimulate the immune system to create special antibodies to attack it, this could train the body to destroy the real coronavirus if they get infected with it in future.

The same process is thought to happen in people who catch COVID-19 for real, but this is far more dangerous – a vaccine will have the same end-point but without causing illness in the process.

It comes after the world’s largest vaccine maker yesterday warned no coronavirus jab will be ready to manufacture on a mass scale until late next year.

Emma Walmsley, chief executive of Brentford-based GlaxoSmithKline, said millions of doses would not be produced until the second half of 2021, ‘if things go right’.

In a separate promising development, major drug giant Pfizer yesterday announced it may have a coronavirus vaccine ready by the autumn.

The US-based company has already started mass manufacturing doses and is aiming to have ‘hundred of millions of doses’ ready by the end of the year.

One in five millennials have NEVER tried a Full English breakfast