Britain has announced another 346 coronavirus deaths today in a nearly 50 per cent drop in fatalities announced last Saturday, taking the UK’s official death toll to 31,587.

Transport Secretary Grant Shapps revealed the figures, which include fatalities in all settings, at tonight’s Downing Street press briefing, where he also announced public transport will be shrunk to one tenth of its pre-lockdown capacity when restrictions are lifted to keep commuters two metres apart.

Today’s rise in deaths is down by nearly half compared to last Saturday, when 621 fatalities were announced, in another sign the outbreak is trending downwards ahead of Boris Johnson’s address to the nation tomorrow night, when he’s expected to unveil a plan to unlock parts of the country.

Deputy chief medical officer Professor Jonathan Van Tam, standing alongside the transport secretary, said officials were now confident the reproductive ‘R’ figure – the average number of people a coronavirus patient infects – is below one, which means it is petering out.

But Mr Van Tam cautioned that ‘we will have to be very cautious, careful and measured about what happens next’. Prime Minister Boris Johnson has insisted that keeping the R below 1 is the most important of five tests that must be passed before returning to normal life.

Experts believe the R is hovering at a stable 0.5 in the community, because people are no longer having regular face-to-face contact with others. But the ongoing crisis tearing through care homes has driven up the rate to 0.9 in some areas, which may be giving the Government hesitation about opening the country back up, scientists and senior MPs have warned.

The Government does not provide a breakdown of how many deaths occurred in different settings, such as hospitals or care homes, but at least 207 of today’s fatalities definitely occurred in hospitals because NHS England reveals new deaths recorded by trusts every afternoon.

Scotland (36) and Wales (nine) do add care home deaths to their daily updates – but the nations do not provide a clear breakdown of how many fatalities occurred in each setting. Ireland’s coronavirus death toll has risen to 1,446 after a further 18 deaths were announced by the National Public Health Emergency Team.

Mr Shapps also admitted the Government had missed its 100,000 daily testing target for a week straight, with just 96,878 swabs carried out in the last 24 hours – down slightly from yesterday’s 97,029.

In other developments in Britain’s coronavirus crisis today: 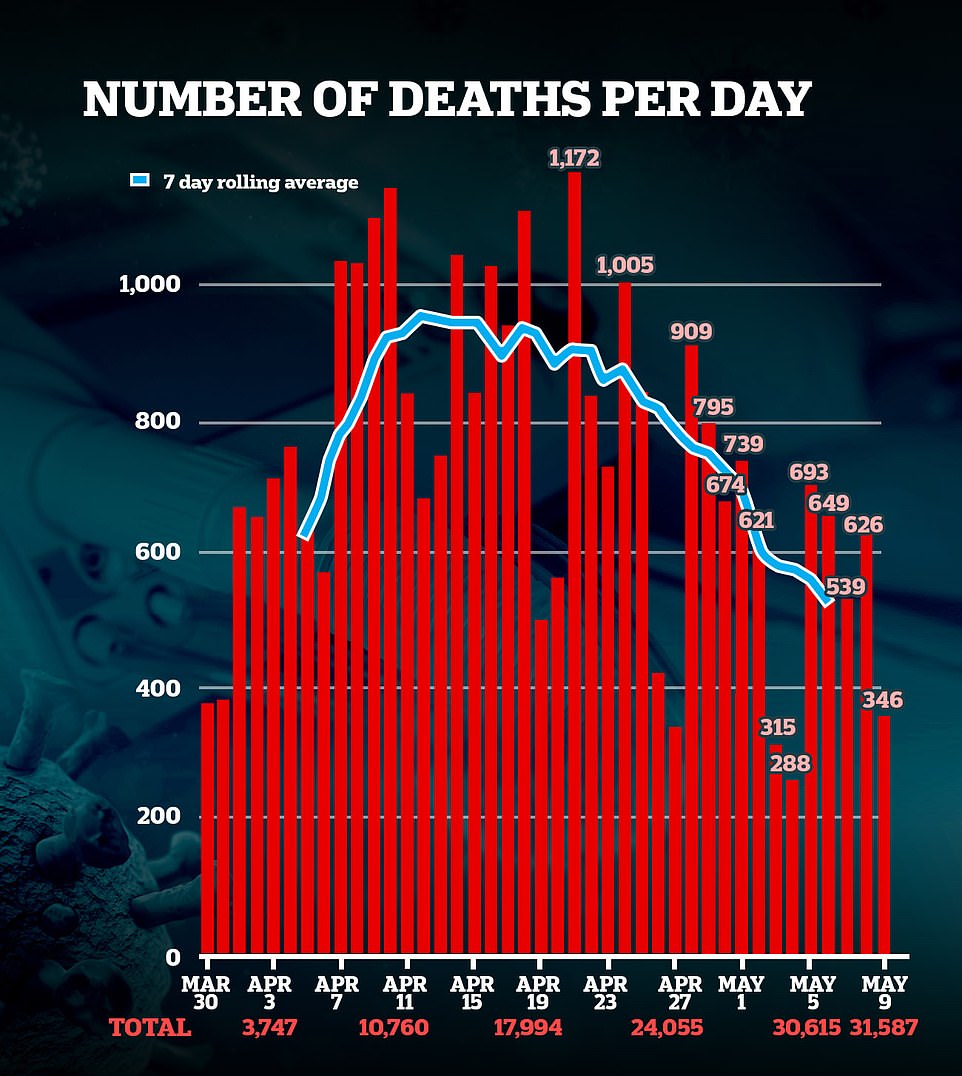 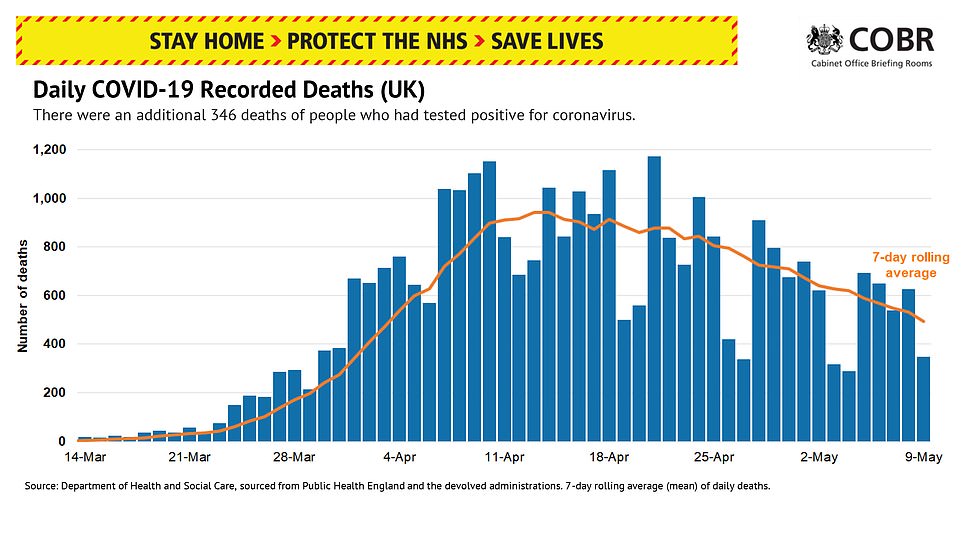 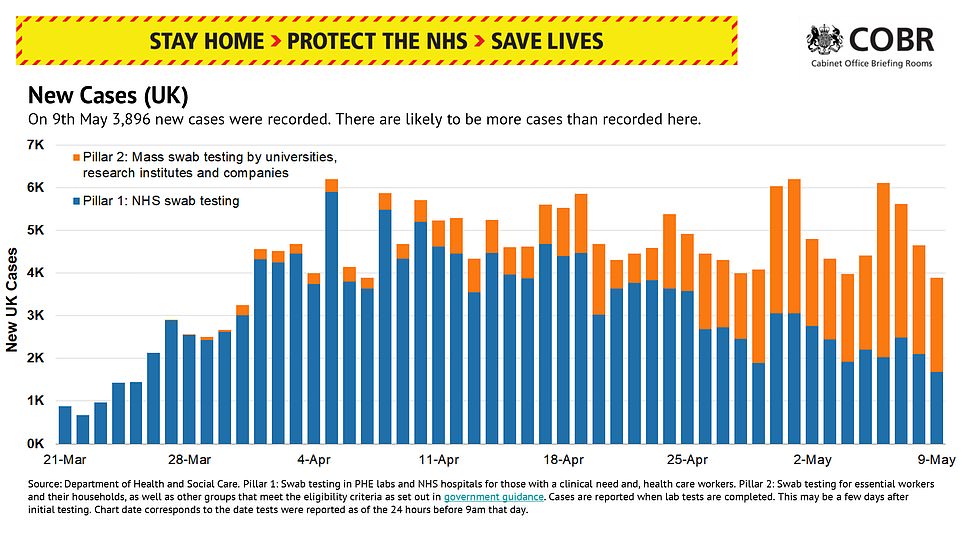 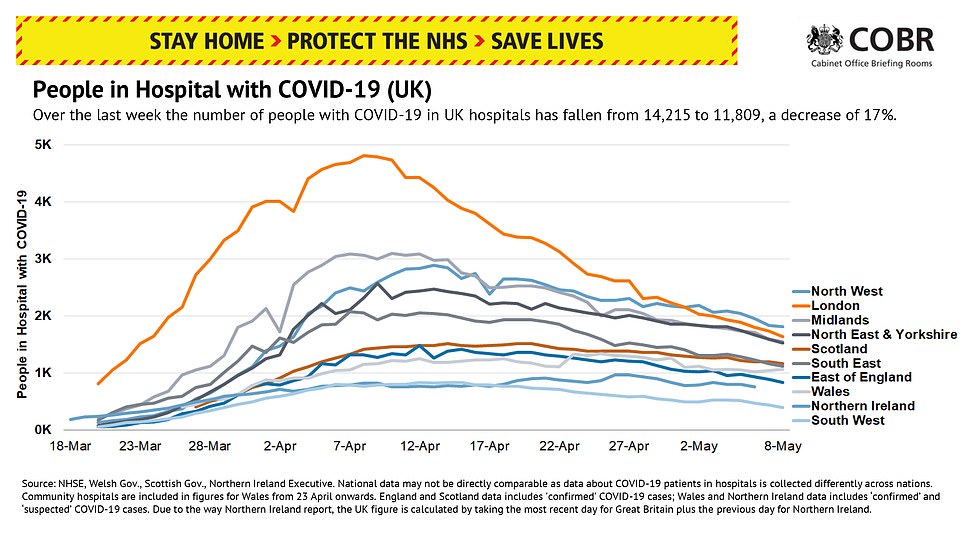 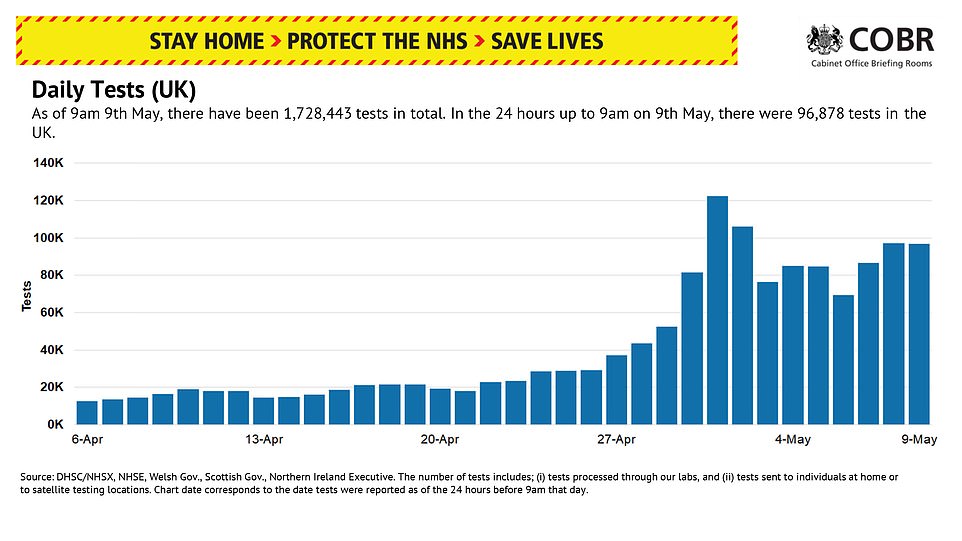 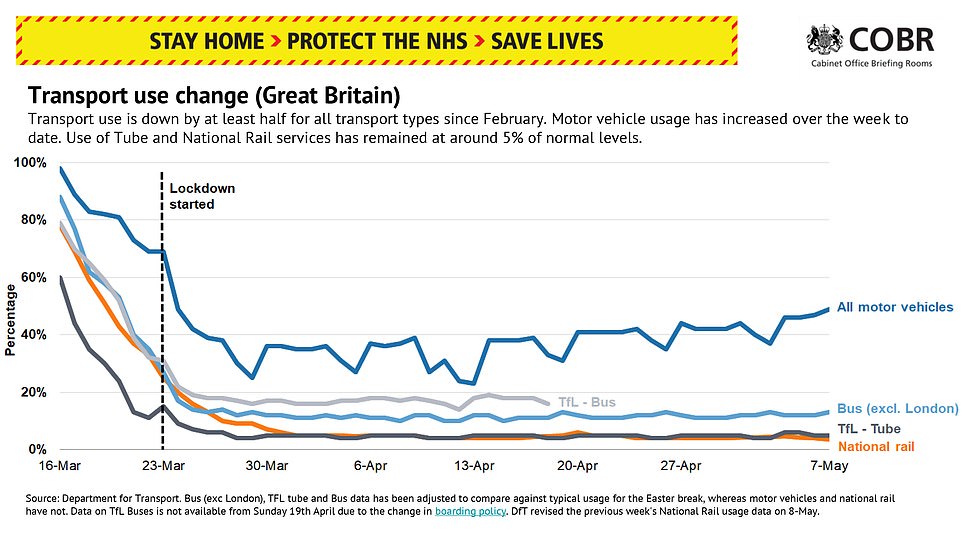 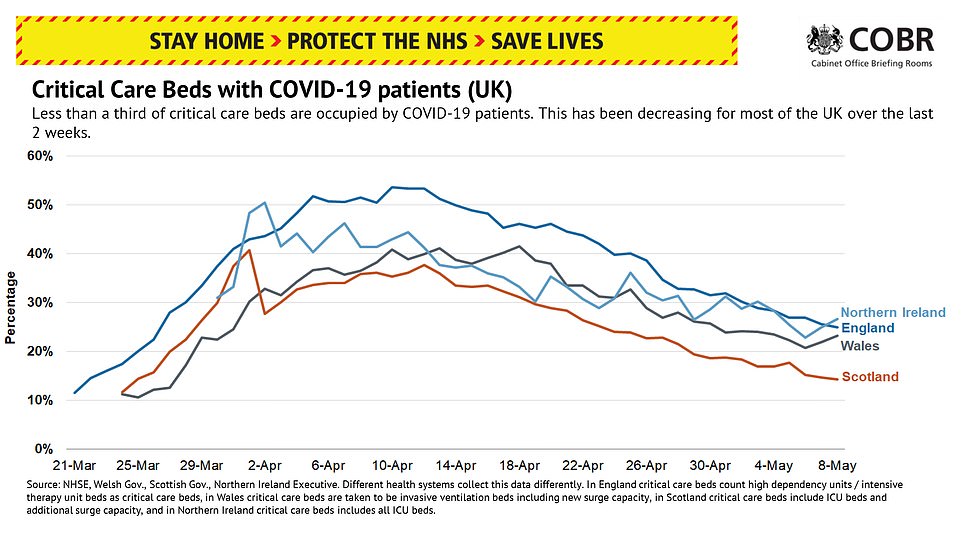 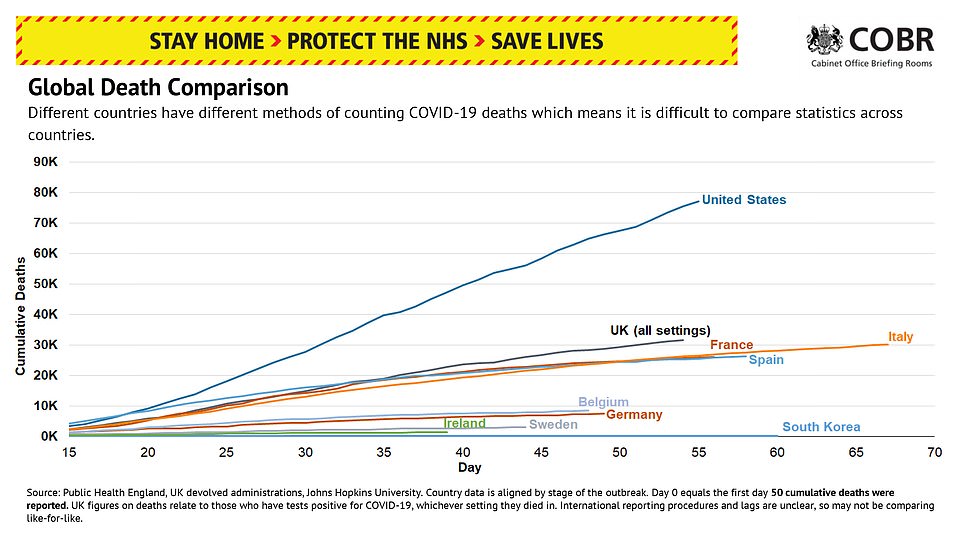 Yesterday, Number 10 declared 626 more coronavirus fatalities, including a baby who is thought to be Britain’s youngest known victim. The infant was exactly six weeks old, meaning they were born on March 23, the day before lockdown.

It comes as thousands of Britons today ignored the Government’s plea to stay indoors by heading to busy parks and markets to enjoy 26C temperatures.

Ministers are obsessed with ‘irrelevant’ R-value  that is skewed by care home crisis, MPs and scientists warn

Lockdown could be needlessly prolonged because of the Government’s obsession with bringing the ‘irrelevant’ R value down, MPs and scientists have warned.

Ministers are relying on the reproductive ‘R’ figure – the average number of people a coronavirus patient infects – to tell them when it will be safe to unlock the country.

Prime Minister Boris Johnson has insisted that keeping the R below 1 is the most important of five tests that must be passed before returning to normal life.

But ministers have been advised against the strategy because the infection rate measure has been skewed upwards by the escalating crisis in care homes.

Experts believe the R is hovering at a stable 0.5 in the community, because people are no longer having regular face-to-face contact with others.

But the ongoing crisis tearing through care homes has driven up the rate to 0.9 in some areas, which may be spooking the Government, according to one senior MP.

If the R figure is above one, it means the disease is continuing to spread rather than gradually fading away.

The R was estimated to be as high as 4 at the start of Britain’s outbreak, but is now between 0.5 and 0.9 nationally.

Officials have teased data revealing more accurate transmission rates in the community in different parts of the country – but they’ve refused to make it public.

Greg Clark MP, the chairman of the science and technology select committee, said the R value was ‘irrelevant’ and slammed the Government’s obsession with it.

He told The Telegraph: ‘There’s a concern that measures that could safely release people back into the community are not being taken because of an irrelevant ‘R’ number determined by cases in care homes and hospitals.

‘It’s not clear how the ‘R rate in care homes is relevant to the ‘R’ rates of people going about their daily business. If people are in a care home, by definition they are not going out into the community and infecting other people.

‘But the single ‘R’ number given out by the Government has been skewed. It cannot reflect the reality outside, and we need to know whether crucial public policy decisions are being based on this number.’

The true size of Britain’s actual COVID-19 outbreak remains a mystery because of ministers’ controversial decision to abandon mass testing early on in the crisis.

A leading epidemiologist last night claimed two thirds of cases in Britain are undiagnosed because the Government refuses to recognise symptoms like loss of taste or smell – which other countries like the US acknowledge as signs of infection.

Today’s deaths mean a total of 1,847 patients have succumbed to the virus in Scotland. The latest statistics show that 13,305 people have now tested positive for the disease North of the Border, an increase of 156 compared to the day before.

Public Health Wales announced its total death toll now stands at 1,099 and infections 11,121. All of the home nations except England add fatalities in all settings, including care homes, to their overall tally.

NHS England’s announcement of 202 new deaths brings the total number of confirmed reported deaths in hospitals in England to 22,972.

The patients were aged between 37 and 100 years old and 19 of them had no known underlying health condition.

Among the deaths, 40 were recorded in the North West of England, 35 in the Midlands, 34 in the South East and 33 in the North East and Yorkshire. London and the South West recorded the smallest number of deaths, recording 23 and 15 respectively.

Meanwhile, police today turned sun-worshipping covidiots away from the seaside as the Coastguard reports its highest number of call-outs since stay-at-home rules began.

Boris Johnson begged Britons to stay at home during the last days of full lockdown, ahead of his address to the nation tomorrow night when he’s expected to relax some of the measures.

The Prime Minister warned that venturing outside during the sunny weather could ‘undo everything that’s been done so far’.

But he was accused of mixed messaging after being pictured strolling through St James’ Park this morning carrying a reusable Costa coffee cup, a commuter staple.

Pictures showed a passer-by accosting Mr Johnson and apparently give him a piece of his mind, with a photo showing him pointing a finger at the dumbfounded PM as a smiling woman looked on.

Tomorrow the PM is expected to reveal his plans to ease the UK’s coronavirus lockdown, with commuters urged to cycle to work, firms told to provide staff with face masks and garden centres allowed to reopen from Wednesday.

Mr Johnson told Cabinet last week that he will be proceeding with ‘maximum caution’ in order to avoid a second wave of deadly infections. 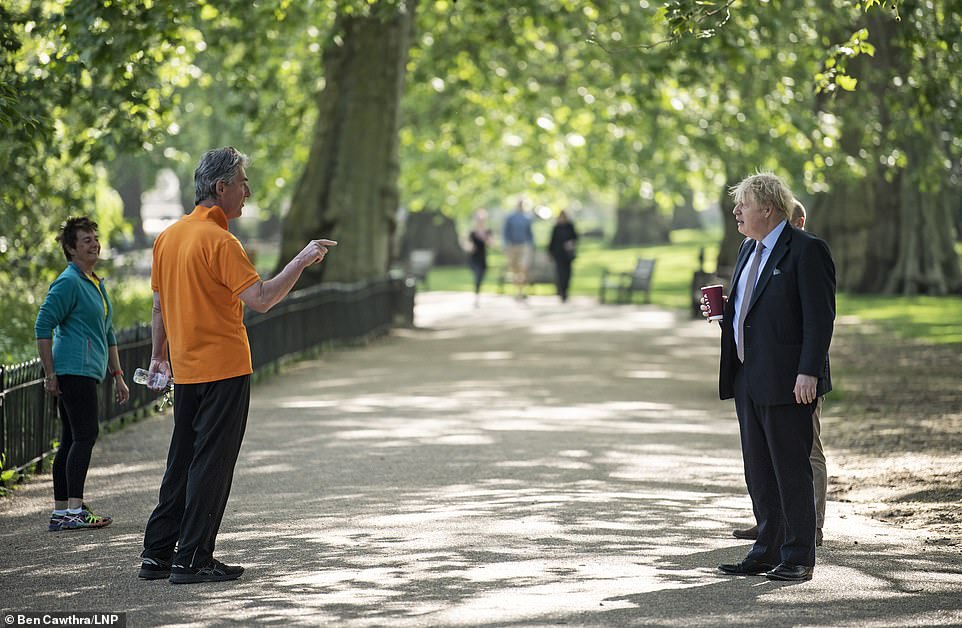 A member of the public stopped to give British Prime Minister Boris Johnson a talking to as he took a morning walk through St James’s Park, London today. He was carrying a reusable Costa coffee cup 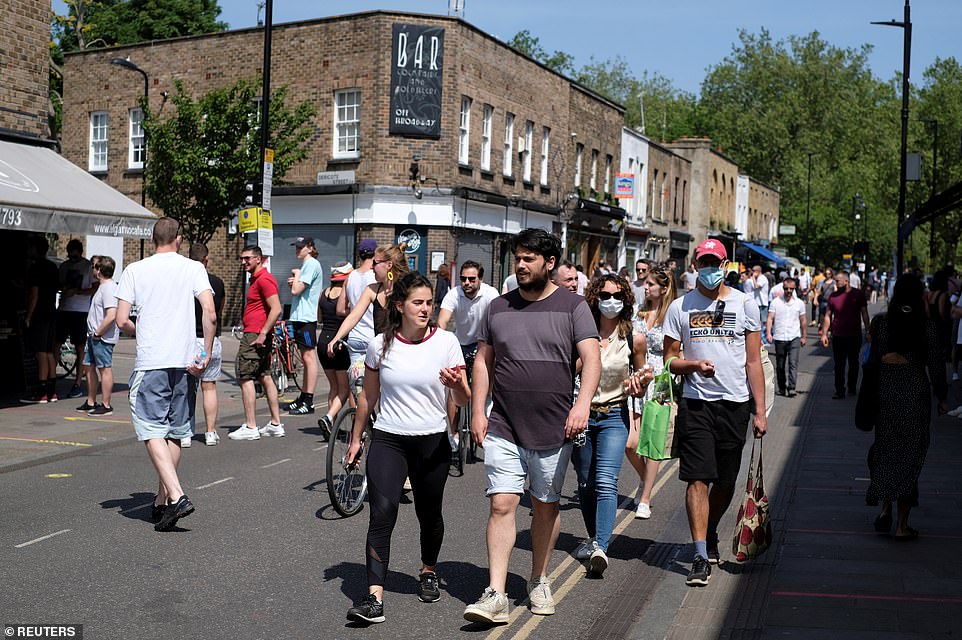 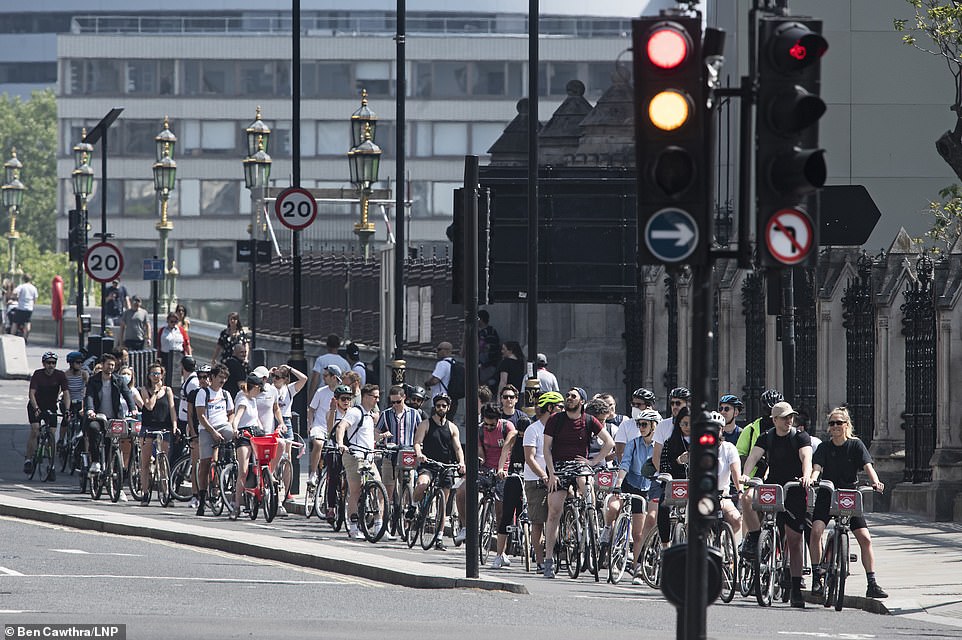 The government’s refusal to recognise symptoms like a loss of taste or smell has led to two thirds of cases going undiagnosed, a leading epidemiologist has claimed.

Tim Spector, professor at King’s College London, said the failure to acknowledge the symptoms has led to statisticians collecting data which is ‘nonsense’.

The Government has listed a fever temperature and a persistent cough as primary symptoms of the killer virus.

But there is growing evidence that a loss of taste and smell are tell-tale signs of infection.

Other nations, like the US, have revised their guidelines to include the symptom and help doctors spot patients.

Officially, just 212,000 Britons have been diagnosed with confirmed coronavirus  – but millions of cases have been missed because of a lack of mass testing.

Professor Spector told The Times: ‘Only people with those two symptoms got tested and ended up on the statistics.

‘All this governmental data on confirmed cases and how many people have recovered, it’s all nonsense.

But he is expected to detail initial changes to some of the draconian curbs currently in place to allow the UK economy to get moving again.

Mr Johnson’s lockdown exit strategy is expected to include:

Ministers are thought to want to start sending children back to classrooms in June but unions have said they will not sign off on the plans until a test and tracing system is fully operational.

The return of schools and childcare services will be key to restoring much of the economy because many workers with children will be unable to go back to work until education settings are up and running.

Meanwhile, Mr Johnson is also expected to announce that firms will be required to provide returning staff with face coverings.

The wearing of such masks will not be compulsory in England but it will be recommended while at work, while shopping and while using public transport.

The Cabinet Office has paid for machines to make the coverings which will then be sent to companies to allocate in order to avoid a run on medical-grade masks which the NHS needs, according to The Telegraph.

However, such a move is unlikely to be enough for critics, with former health secretary Jeremy Hunt today arguing that temperature-checking walk-through scanners should be installed at the entrances to all restaurants and offices.

Mr Johnson’s long-anticipated ‘road map’ for getting out of lockdown is expected to set out ‘milestones’ for the easing of measures.

Initial changes – some starting from Monday – are likely to focus on outdoor activities due to the reduced rate of transmission outdoors compared to indoors.

Mr Johnson will announce that garden centres will be allowed to open their doors to customers from Wednesday May 13.

Nursery bosses will have to ensure shoppers obey social distancing measures, such as keeping two metres away from others, and will be expected to put restrictions in place, including queuing systems and installing Perspex shields to protect till staff, in a similar way to supermarkets.

A senior Government source said: ‘Garden centres are typically open large open-air spaces where the risk of transmission of coronavirus is lower.

‘With strict social distancing measures in place we believe they can open safely from next week.’

It is also understood ministers are preparing to recommend that commuters use their bicycles for journeys to work, in a bid to reduce the number of people using public transport.

Mr Shapps will later unveil a further £250 million for extra cycle lanes, while trials on the use of e-scooters on British roads are due to be fast-tracked.

The lockdown plan is due to set out a phased restarting of the UK economy with different sectors returning at different times.

However, those workers who can work from home could soon be given the legal right to do so.

This would stop them feeling compelled to go to the office, make it easier for workplaces to comply with social distancing measures and reduce the strain on public transport.

How to make Greggs Bacon and Cheese Wraps at home 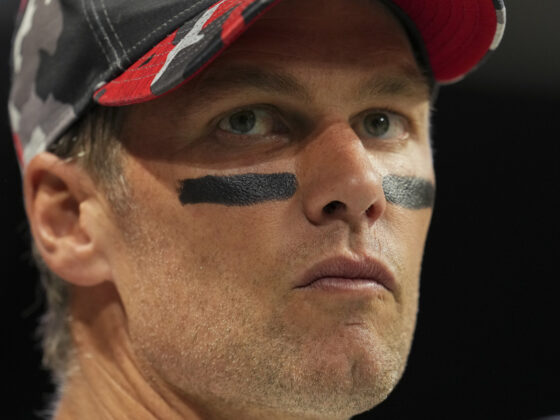