Upmarket supermarkets have often tried out fancy new ingredients or flavours in an attempt to produce the ultimate mince pie.

But this year the best are made by… Spar. The budget chain beat its posh rivals to record its first win in BBC Good Food magazine’s blind taste tests for the finest festive offerings.

But the most surprising triumph was Spar’s pack of Luxury Mince Pies at £2. 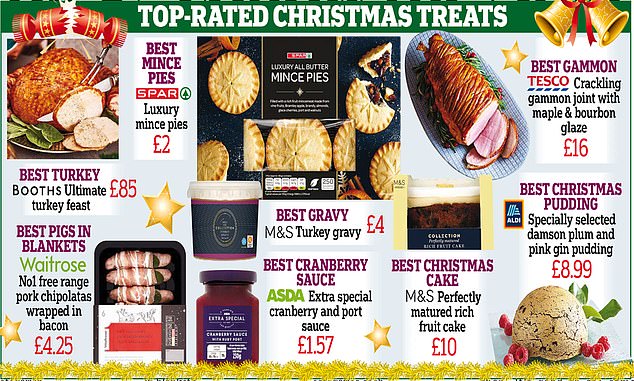 Judges praised the ‘crumbly, buttery pastry’, adding: ‘The filling is sweet and jammy, with nice big chunks of plump, soaked fruit and a good hit of citrus.’

Morrisons’ £2 ‘The Best’ Deep Filled Mince Pies – which came first in the past two years – and Aldi’s Specially Selected Mince Pies at £1.49 were highly commended.

The 2020 Christmas Taste Awards saw judges test more than 150 products from 13 of the leading supermarkets. With 75 days still to go until Christmas, posher rivals still dominated the 20 different categories. 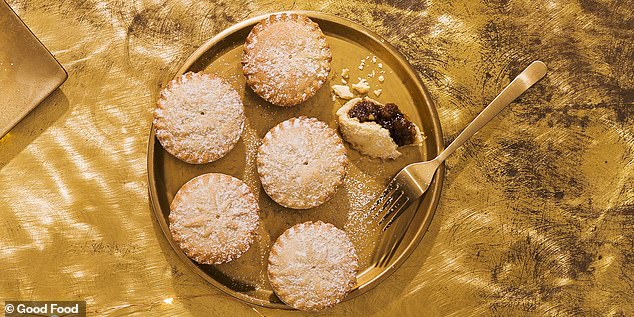 The winner of the flavoured mince pie category was Waitrose’s Mini mince pie selection (£3), with judges particularly impressed by the almond-topped variety and nutty baklava-filled one.

M&S came top in the gluten free category with their £2.50 four-pack of mince pies that are made without wheat. Morrisons’ Free From The Best Maple Crumble Mince Pies (£2.50) were highly commended.

Booths – the high-end supermarket of choice for those in the North – scooped the Best Turkey Centrepiece award for its £85 offering.

The judges said of the Booths bird: ‘This truly is a feast, covering turkey, stuffings and pigs in blankets all in one! 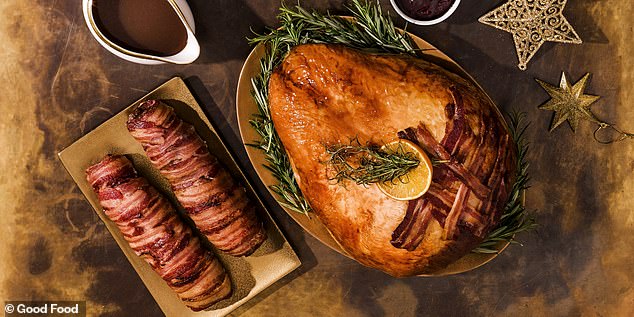 ‘It includes a succulent turkey crown stuffed with moist, well-flavoured pork, sage and onion stuffing as well as boneless, bacon-wrapped turkey thighs with a pork and cranberry stuffing.’

Waitrose’s Best of Both: Free Range Bronze Turkey Crown with Thighs (2.9kg), which costs £65, and M&S’ Perfect Turkey Crown (2.9kg) priced at £50 were both highly commended in this category.

Booths also won best fish centrepiece for its £30 Oak Roasted Salmon (750g). The judges said it’s ‘great for a festive party or as part of a boxing day spread’.

Co-op scooped the prize for best salmon with its £5 Irresistible Beech and Oak smoked fish praised for its ‘smoky flavour without being overpowering, a hint of sweetness and nice firm texture’. 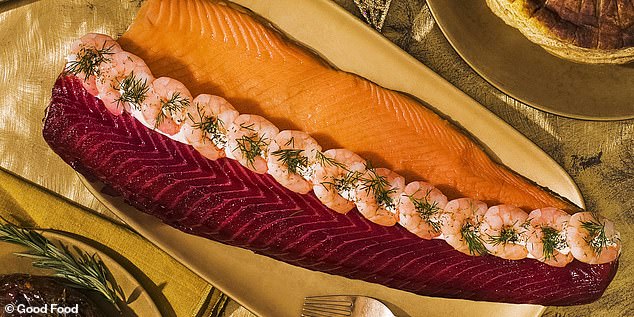 Booths also won best fish centrepiece for its £30 Oak Roasted Salmon (750g). The judges said it’s ‘great for a festive party or as part of a boxing day spread’

Tesco was highly commended in this category for its Finest Scottish Smoked Salmon (240g), priced at £7, as was Morrisons for its The Best Triple Smoked Tsar Cut Salmon with Soy dressing (283g – £8).

The judges complimented the Morrisons fish as ‘satisfyingly soft’, adding that its accompanying soy dressing ‘doesn’t feel very festive but for those who like things extra salty, it’s a nice addition’.

M&S took gold for its vegetarian and vegan main courses; the ‘comforting’ £18 Mushroom, camembert and parsnip pie was praised for its ‘umami, almost truffle-like mushroom filling, offset by sweet parsnip and a camembert centre’ while the £10 Plant Kitchen mushroom, chestnut and pumpkin wreath was described as ‘hearty’ and well-seasoned. 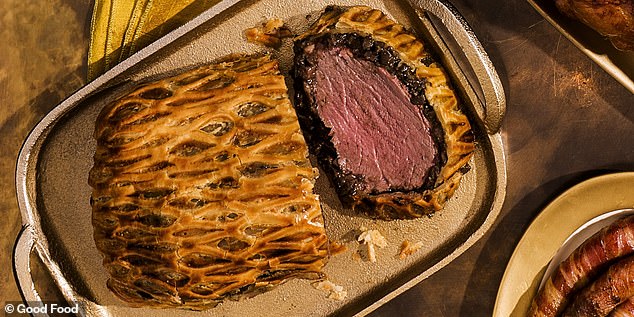 Waitrose’s Entertaining British Beef Wellington (1.4kg), £59, impressed judges thanks to its crisp, buttery and well-cooked latticed pastry and the earthy, umami flavours in the chunky mushroom duxelle and ‘peppery and tender’ meat

Waitrose’s £6.99 vegan festive filo swirls were highly commended. The judges said: ‘These Moroccan-inspired filo swirls are generously filled with spiced vegetables and dried fruits, including squash, red pepper, apricots and raisins. Our judges liked this as a stand-alone dish for its crisp filo pastry and heavy spicing but feel that the flavours of cumin, coriander and chili don’t complement traditional Christmas trimmings.’ 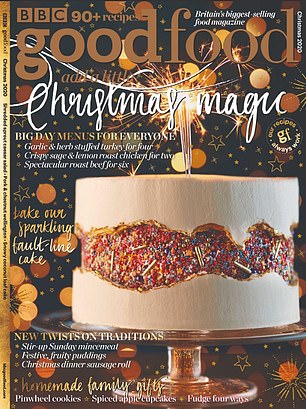 For your ultimate Christmas guide, pick up the BBC Good Food number Christmas issue, out October 29

The supermarket’s beef wellington (£59) also came out top, with the judges impressed by the crisp, buttery and well-cooked latticed pastry and the earthy, umami flavours in the chunky mushroom duxelle and ‘peppery and tender’ meat.

The £5 cheaper M&S wellington was highly commended, which judges recommending a slightly shorter cooking time than stated on the packaging.

Waitrose also bagged the prize for best pigs in blankets (£4.25), with the Co-op ‘a close second’ in the category.

Marks and Spencer’s turkey gravy (£4), described by the judges as ‘could pass as homemade’, just pipped the Turkey, Sage and Onion Gravy Granules from Sainsbury’s, which cost £1.45.

Christine Hayes, BBC Good Food editor in chief, said: ‘Getting the most for your money will be more important than ever this Christmas so be sure to check our winners before planning your big shop. It’s good to see some great-value wins.’

The full list will be published at the end of October in the Christmas edition of BBC Good Food.

Can the flu jab make you feel ill? Side effects explained

Lung cancer referrals are down 50% because symptoms are similar to Covid-19, experts claim

How to create your own KFC Hunters Chicken Toastie