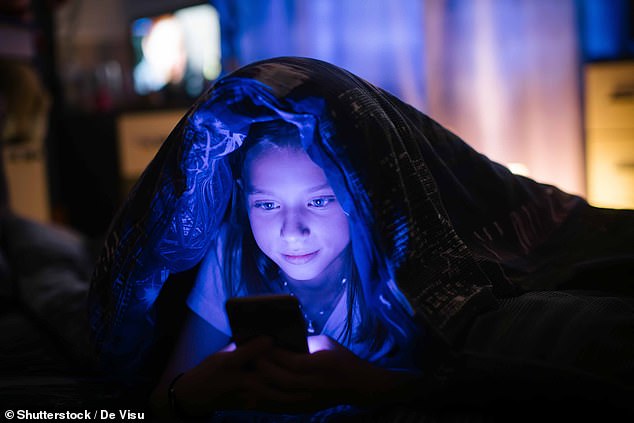 Children sleep less and have poorer quality slumber if they use smartphones, tablets and other electronic devices at night, a new study has warned.

Those aged between six and 15 years old are most likely to be affected, the researchers said, blaming video gaming, computers, phones, internet use and watching television.

In children aged five and under, television and tablets were the main culprits for shorter sleep.

Children sleep less and have poorer quality slumber if they use smartphones, tablets and other electronic devices at night, a new study has warned (stock image)

How much sleep do children need?

According to the NHS, the recommended sleep durations are:

The research by the University of Southern Denmark reviewed 49 studies published between 2009 and 2019, with the studies involving between 55 and 369,595 children.

Experts looked at the association of electronic media use, including media type and duration, with sleep patterns.

They found a link between electronic device use and delayed bedtime and poor sleep quality in children aged six to 12, while screen time among teenagers aged 13 to 15 was associated with problems falling asleep.

Social media use was also to blame for poor sleep quality among teenagers, the researchers said.

They say this interactive media may be overly stimulating, which may explain why the age group get less sleep.

In all age groups, exposure to blue light from screens may suppress the production of melatonin – the hormone that regulates sleep – leading to poorer sleep duration and disturbing the natural sleep-wake cycle, the study found.

Researchers found a link between electronic device use and delayed bedtime and poor sleep quality in children aged six to 12, while screen time among teenagers aged 13 to 15 was associated with problems falling asleep (stock image)

Lisbeth Lund, lead author, said: ‘It is important that children and adolescents get sufficient sleep to avoid negative health consequences.

‘We also understand that media is an important part of our lives.

‘Our findings suggest that parents may wish to regulate how much their children are engaging with electronic media to potentially improve sleep.’

However, the authors of the research said most of the studies were observational and therefore did not allow for conclusions about cause and effect or the direction between the association of media use and sleep quality.

They said more research was needed to draw solid conclusions about electronic media’s impact on sleep.

‘Public awareness and interventions could be promoted about the potential negative impact on children’s sleep of electronic media devices that are used excessively and close to bedtime,’ the researchers wrote in the paper.

A previous study has also warned that spending more than an hour a day watching programmes on devices may increase the risk that toddlers will have emotional and behavioural issues.

These issues include hyperactivity, poor concentration, short attention spans and trouble connecting with other children and forging friendships.

The researchers, led by social scientist Janette Niiranen of the Finnish Institute for Health and Welfare in Helsinki, speculated that devices are reducing the time that children spend reading, playing and interacting with family, or other youngsters.

The latest research has been published in the journal BMC Public Health.

HOW MUCH SCREENTIME SHOULD TEENAGERS GET?

A recent study by San Diego State University found that the happiest teenagers were those who limited their daily digital media time to slightly less than two hours a day.

Looking at historical trends from the same age groups since the 1990s, the researchers found the proliferation of screen devices over time coincided with a general drop-off in reported happiness in American teenagers.

Study participants born after 2000 were less satisfied with life, had lower self-esteem and were unhappier than those who grew up in the 1990s.

Since 2012, the average teenager’s life satisfaction, self-esteem and happiness has plummeted.

That year marked the point when the proportion of Americans who owned a smartphone rose above 50 per cent for the first time.

Rajasthan Man Sleeps 300 Days A Year Due To Rare Disorder:...