Coronavirus could be spread through sex, experts now fear after they detected the infection in the semen of recovering men.

Researchers in China analysed semen samples from 38 men who tested positive for COVID-19. Some had recovered while others were infectious.

One in six had traces of the coronavirus in their semen – including those who were no longer sick.

Top infectious disease experts admitted the findings were ‘not surprising’ because viruses such as Zika and Ebola are present in semen samples.

The Chinese study did not prove that the virus could be transmitted through sex – it only suggested it was a possible.

But the finding prompted the team to warn that abstaining from sex while infected – and during recovery – would likely be a wise decision.

So far 3.7million cases of COVID-19 – the disease caused by the coronavirus – have been reported globally.

But that figure is only a fraction of the truth because it does not include the millions who have suffered mild disease and recovered at home without being tested. 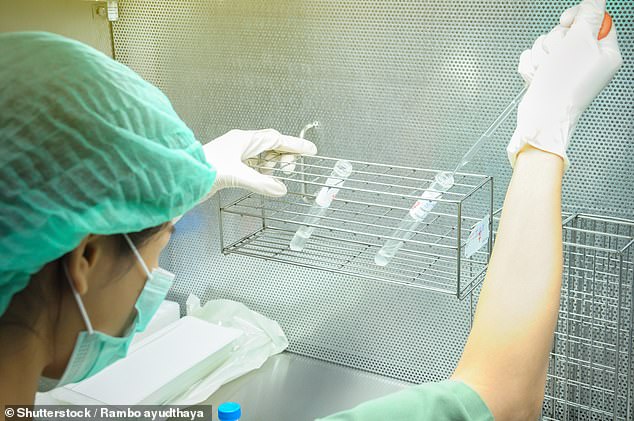 The killer coronavirus can be found in semen, a small study has shown

The study was done at Shangqiu Municipal Hospital, the only designated centre for the treatment of COVID-19 in Shangqiu, Henan province.

Men over the age of 15 who had tested positive for the virus between January 26 and February 16 gave semen samples.

Results of semen testing found that six patients (15.8 per cent) had results positive for SARS-CoV-2, the official name of the novel coronavirus.

A quarter of those who were still infectious had the virus in their semen, according to the paper published in the journal JAMA.

But what was ‘particularly noteworthy’ to the scientists, was that 8.7 per cent of the those who had recovered had traces in their semen.

DOES THE VIRUS ENTER THE MALE REPRODUCTIVE TRACT?

Scientists have found traces of SARS-CoV-2 in semen samples of very small studies. But the implication of this on male reproductive health or spread of the virus has not been robustly studied yet.

Urologists at Suzhou Affiliated Hospital of Nanjing University theorised that the coronavirus could cause testicular damage.

In a paper published on MedRxiv.org – a platform for papers that have not been peer-reviewed by other scientists to flag false claims – the team said their interest in COVID-19 was roused when it came to light that the coronavirus enters cells by binding to ACE2 receptors.

‘Several researches have indicated that some patients have abnormal renal function or even kidney damage in addition to injury in respiratory system, and the related mechanism is unknown,’ the team said.

‘This arouses our interest in whether coronavirus infection will affect the urinary and male reproductive systems.’

The team analysed ‘online datasets’ and found ACE2 expression in different human organs. The results indicate that ACE2 highly expressed in the mans tested, and can be concentrated in several cells which are directly related to the male reproductive abilities, including the germ cells, supporting cells and Leydig cells.

‘Therefore, virus might directly bind to such ACE2 positive cells and damage the kidney and testicular tissue of patients,’ they wrote.

They warned that doctors should pay close attention to possible damage in the testicles of coronavirus patients, especially if they are of reproductive age.

The warning was echoed by another team of scientists at Tongji Hospital, affiliated to Huazhong University of Science and Technology, is one of the hospitals designated by the government to treat coronavirus patients since an outbreak started in Wuhan in January.

Although the coronavirus mainly targets one’s lungs and immune system, the infection could result in ‘impairment of immune homeostasis in the testes’, which could cause orchitis – an inflammation of the testicles.

This in turn could reduce a man’s sperm count and possibly lead to infertility, according to the team who also noted the ACE2 theory.

They added that during the SARS outbreak in 2002 and 2003, medics observed serious immune system damage in the testicles of some male patients.

The hospital report was widely shared on social media despite being pulled from provincial government’s website just hours after being uploaded.

There were no obvious trends spotted in the men whose sample contained the virus.

They ranged from their 20s to 50s, three had an underlying health condition, and their symptoms started between six and 16 days prior to giving the semen sa

No follow-up with the men was conducted to see if the virus survived for long periods of time in semen and if it was viable.

The authors of the paper, led by Dr Diangeng Li, of the Chinese People’s Liberation Army General Hospital, Beijing, suggested the coronavirus may one day be found to be sexually transmissible.

They wrote: ‘If it could be proved that SARS-CoV-2 can be transmitted sexually in future studies, sexual transmission might be a critical part of the prevention of transmission, especially considering the fact that SARS-CoV-2 was detected in the semen of recovering patients.

‘Even if the virus cannot replicate in the male reproductive system, it may persist.

‘Abstinence or condom use might be considered as preventive means for these patients.

‘To avoid contact with the patient’s saliva and blood may not be enough, since the survival of SARS-CoV-2 in a recovering patient’s semen maintains the likelihood to infect others.’

At this stage little is known about whether SARS-CoV-2 is found in semen and if this contributes to infection rates.

But this study and others indicate a real possibility that is the case, according to Professor Richard Sharpe, MRC Centre for Reproductive Health, University of Edinburgh.

Commenting on the findings, he said: ‘This finding raises the possibility that COVID-19 might also be transmissible via semen (and thus via sexual contact), perhaps including during the recovery phase – which would have disease management implications.’

But he added the study leaves ‘many important questions unanswered’, including how long after infection can the virus be found in semen for.

Former chair of the British Fertility Society Allan Pacey, professor of andrology at University of Sheffield, said: ‘This opens up the possibility that one route of infection may be through sexual contact, although this was not confirmed in the paper.

‘We should not be surprised if the virus which causes COVID-19 is found in the semen of some men, since this is been shown with many other viruses such as Ebola and Zika.’

Zika virus can spread through sex and can stay in semen longer than in other body fluids. Whether Ebola is passed through sex is less clear but ‘strongly possible’, according to the World Health Organization.

Professor Pacey pointed to a study published two weeks ago which was in stark contrast to that of Dr Diangeng Li and colleagues. The conflicting results only adds to the drive to find answers, he said.

The study by the Tongji Medical College in China found no evidence of the virus in semen in 34 Chinese men.

However, the study only looked at men who had recovered and had been diagnosed with mild to moderate cases of COVID-19 a month before.

None of the semen donors had been severely ill with COVID-19, the study published in the journal Fertility and Sterility noted.

The researchers concluded they could not rule out the possibility the virus would be in seminal fluid during the infectious period.

Urologist Dr James Hotaling, co-author of the study, at University of Utah Health said: ‘If a disease like COVID-19 were sexually transmittable that would have major implications for disease prevention.’

And Dr Hotaling also warned that it may have had ‘serious consequences for a man’s long-term reproductive health’.

SARS-CoV-2 has also been found in samples of faeces and urine – but this doesn’t necessarily mean it is an important route of transmission.