The coronavirus may cause deadly blood clots, further scientific research has today revealed.

Irish doctors discovered the infection can cause ‘hundreds of small’ blockages in the lungs.

These clots may then damage lung function, which the scientists say is ‘undoubtedly’ causing deaths.

If respiratory failure occurs, it can cause low oxygen levels, putting strain on the organs which could ultimately fail.

The study follows reports from the US that blood clots are probably responsible for a ‘large amount’ of the coronavirus deaths – even after a patient is discharged from hospital.

Other studies have shown abnormal blood-clotting in COVID-19 patients results in a significantly increased risk of heart attacks and strokes.

It’s believed these risks are only coming to light now because ethnicity plays a major role in blood-clotting effects.

Chinese people are at a lower risk of blood clots generally, likely due to genetic differences.

It could even help explain why the coronavirus appears to be deadlier in Europe in comparison to countries like China, experts say. 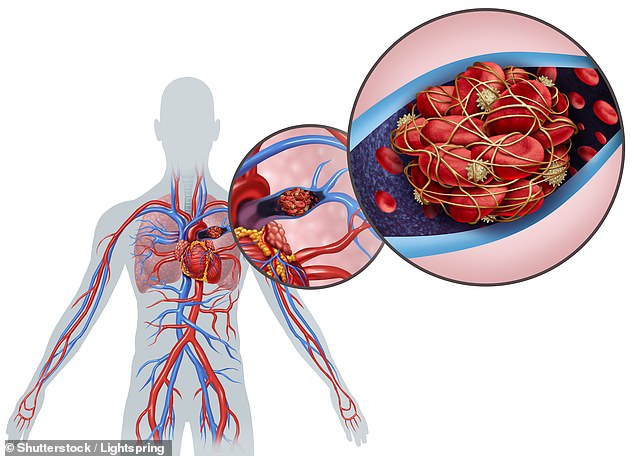 More evidence shows that the coronavirus may cause deadly blood clots, as Irish medics find hundreds of small blockages in the lungs. Pictured, an illustration of a blood clot in the lungs 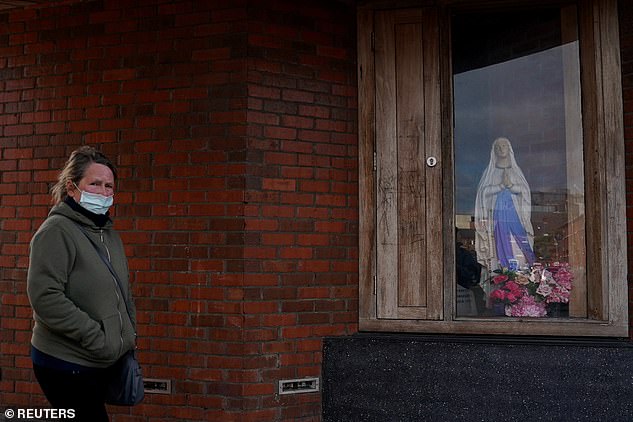 Doctors looked at 83 severe COVID-19 patients at St James’s Hospital in Dublin. Pictured, a woman wearing a mask in Dublin on April 28

The report, published in the British Journal of Haematology, comes after studying 83 severe COVID-19 patients at St James’s Hospital in Dublin.

The patients were, on average, 64 years old, and 80 per cent had underlying health conditions.

More than a quarter (27 per cent) were admitted to ICU during their illness. At the time of the publication, 60 per cent had recovered and 15.7 per cent of patients died.

One indicator – called D-dimer levels – were above the normal range in 67 per cent of the total cohort on admission to hospital.

D-dimer is a substance left over in the blood when there has been a blood clot, so high levels indicate a problem.

The scientists suggests the abnormal blood clotting occurs in the lungs specifically, causing many ‘micro-clots’.

‘Our novel findings demonstrate COVID-19 is associated with a unique type of blood clotting disorder that is primarily focused within the lungs,’ said author Professor James O’Donnell, consultant haematologist in the National Coagulation Centre in St James’s Hospital, Dublin.

HOW DOES THE VIRUS LEAD TO DEADLY BLOOD CLOTS?

The coronavirus appears to cause blood clotting which can lead to deadly strokes, heart attacks or pulmonary embolisms.

While experts are unsure why the virus causes the blockages, there are three main theories:

Some say it could be the result of a an immune overreaction called a ‘cytokine storm’.

Cytokines are chemical-signaling molecules which guide a healthy immune response.

They tell immune cells to attack viral molecules in the body.

But in some people, this response goes into overdrive and immune cells start attacking  healthy tissue as well, known as a cytokine storm.

As blood vessels become damaged they can leak, causing blood pressure to drop and driving up the chance of clots forming.

Other scientists say the surge in strokes may be a byproduct of the way COVID-19 invades the human body.

Professor Ian Jones, a virologist at the University of Reading, told MailOnline: ‘Covid binds to an enzyme called ACE2 which is on the surface of the cell.

‘It simply uses it as a way of attaching itself but in doing so the enzyme function of ACE2 is reduced.

‘The consequence of this is an imbalance of hormones called Angiotensin I and Angiotensin II which together regulate blood pressure.

‘It could be related to the increase in strokes reported.’

Dr Robert Bonow, a professor of cardiology at Northwestern University, said it may be the coronavirus’ unique shape that is causing the bloodclotting issues.

He said the virus’ spikes, which latch onto receptors in cells, can also attach to blood vessels.

Once they dock onto these blood vessel cells, the viral particles can trigger damage to these as well as to heart muscle, Dr Bonow says.

‘[This] undoubtedly contributes to the high levels of mortality being seen in patients with COVID-19.

‘In addition to pneumonia affecting the small air sacs within the lungs, we are also finding hundreds of small blood clots throughout the lungs. This scenario is not seen with other types of lung infection.

‘Understanding how these micro-clots are being formed within the lung is critical so that we can develop more effective treatments for our patients, particularly those in high risk groups.’

The authors of the paper said its not clear how the virus leads to blood clotting, but one theory rests on ACE2 receptors.

ACE2 receptors have been said to work as the coronavirus’s doorway into the body and to ‘facilitate’ infection.

And they have been causally linked to a lower risk of infection and disease severity in smokers, because nicotine is thought to impact expression of ACE2 in various ways.

Professor O’Donnell and colleagues said ACE2 receptors are expressed on cells within the lungs, including endothelial cells in the organs’ blood vessels.

Endothelial cells play a huge role in the regulation of blood flow and preventing blood clotting. Therefore damage to them directly by the virus could cause rapid activation of clotting.

But another theory is that clots are formed as a result of a an immune overreaction called a ‘cytokine storm’.

Cytokines are chemical-signaling molecules which guide a healthy immune response. They tell immune cells to attack viral molecules in the body.

But in some patients, this process goes into overdrive and immune cells begin destroying healthy tissues, known as a cytokine storm.

The cytokine storm associated with COVID-19 infection will have major impacts upon thrombin generation.

Thrombin is an enzyme which catalyzes blood clotting. It’s involved in stopping a wound as small as a paper cut from bleeding.

It helps create a fibrous mesh that impedes blood flow with a protein called fibrin. Fibrin may be deposited in the lungs, causing excessive clotting.

All this considered, the scientists said the acute respiratory distress syndrome (ARDS) seen in COVID-19 patients may be the result of a ‘double hit’ of damage to the lungs.

Both the ventilation of lungs, which is the flow of air into the lungs, and perfusion, which is blood flow to capillaries on the outside of the lungs, may be damaged.

This, in turn, would lower oxygen levels in the body because it interrupts a vital process called gas exchange.

Gas exchange is when oxygen that is inhaled gets to the bloodstream and then vital organs.

It happens at a junction in the lungs between tiny sacs in the lungs called alveoli and blood of tiny vessels on the outside called pulmonary capillaries.

For effective gas exchange to occur, alveoli must always be ventilated and perfused properly.

Other researchers investigating the link between blood clots and COVID-19 say the unique shape of COVID-19 may allow it to latch onto blood vessels when it invades the body, damaging them and causing leaks.

Or the cytokine storm can lead to damaged blood vessels which leak and cause blood pressure to plummet, driving up the chance of clots forming.

Dr Jamie Garfield, a pulmonologist from Temple University Hospital in Philadelphia who cares for COVID-19 patient, told Science Magazine this was ‘probably’ the real reason behind many coronavirus deaths.

Although this study primarily looked at clotting in the lungs, blockages near the heart can lead to a heart attack, another common cause of death in infected people. And clots above the chest can cause strokes.

Thirty-eight per cent of Dutch ICU patients had blood clotting in a April 10 study published in Thrombosis Research.

Between 20 and 40 percent of COVID-19 patients at Emory University in Atlanta, Georgia, have developed blood clots – even after being put on anticoagulants.

‘One of the things that is being learned about COVID is how much it produces coagulation problems – i.e. thrombosis (blood clots) found in both large vessels as well as the microvasculature,’ Dr Paul Saunders, a physician at Maimonides Medical Center, told DailyMail.com via Twitter direct message.

‘That’s been found in multiple sites in the body – for example, blood clots in the legs small clots all over the the lungs, as well as large pulmonary emboli.’

Other data suggests clots that start in the lower body can migrate to the lungs, causing a deadly blockage called a pulmonary embolism.

But an interesting point made by the team in Ireland is that blood clotting appears to be more of a risk for Caucasians, specifically venous thrombo-embolism (VTE).

The team did not explain why because scientists have previously struggled to pinpoint the differences on a genetic and/or clinical basis.

The team wrote: ‘Ethnicity has major effects on thrombotic risk, with a three to four fold lower risk in Chinese compared to Caucasians and a significantly higher risk in African-Americans.

‘Given these data, it is clearly important to determine whether there are differences in coagulopathic features in COVID-19 infected Caucasian compared to Chinese patients.’

‘Given that thrombotic risk is significantly impacted by race… our findings raise the intriguing possibility that pulmonary vasculopathy may contribute to the unexplained differences that are beginning to emerge highlighting racial susceptibility to COVID-19 mortality.’

Professor O’Donnell said it would be worthwhile to investigate whether different blood thinning treatments could be given to severe COVID-19 patients.

Chinese doctor, 29, dies of a stroke after fighting coronavirus on the front line for 35 days in a row

A 29-year-old Chinese doctor died of a stroke after fighting the coronavirus for 35 days non-stop.

Dr Dong Tian, an anaesthetist, was declared dead at a hospital in Hubei a week before his 30th birthday in March.

The medic worked non-stop on the front line for over a month before collapsing and being rushed to the hospital on March 3.

He was treated at the Intensive Care Unit for 19 days before passing away, according to reports. He left behind his wife and sick father.

Dr Dong, who was looking after his sick father back home, volunteered to return to work in late January as the outbreak rapidly swept Hubei Province, the former epicentre of the coronavirus.

On February 29, the doctor was given a break after working for 35 days in a row. He was put under isolation due to quarantine requirements.

The anaesthetist was rushed to the hospital when he had a sudden headache and started losing the ability to speak during his quarantine.

The Zhijiang People’s Hospital, where Dr Dong worked, announced his passing on March 21.

‘Comrade Dong Tian was efficient and proactive in his work,’ said the hospital. ‘He respected the leaders and was kind to his colleagues.’

‘Dong Tian is an outstanding representative of the ‘millennial doctors’,’ his medical college wrote in a separate statement.

‘He used his life to express his benevolence and love as a doctor. He sacrificed his youth and passion for his medical career.’

Number 10 reveals Britain’s R0 is below 1