Coronavirus is killing people more than a decade before they would have died naturally, according to a study.

Men who die of COVID-19 are losing, on average, 13 years of their lives, scientists say, while women have 11 years cut off their life expectancy.

The disease, which has hospitalised more than 100,000 people in the UK, is having a devastating impact comparable to heart disease, the scientists said.

The research was done by Public Health Scotland and experts at the universities of Glasgow and Edinburgh.

It flies in the face of authorities’ focus on the ‘underlying health conditions’ of most of the people dying of COVID-19.

And it goes against claims many of the victims are people who were likely to have died anyway.

Office for National Statistics data shows that most people dying in the UK are aged between 75 and 84.

The Scottish research argues that many of those could have expected years or even more than a decade more life if they hadn’t caught the virus.

Even people with long-term illnesses – known as morbidities – are having their lives cut short by many years, they said. 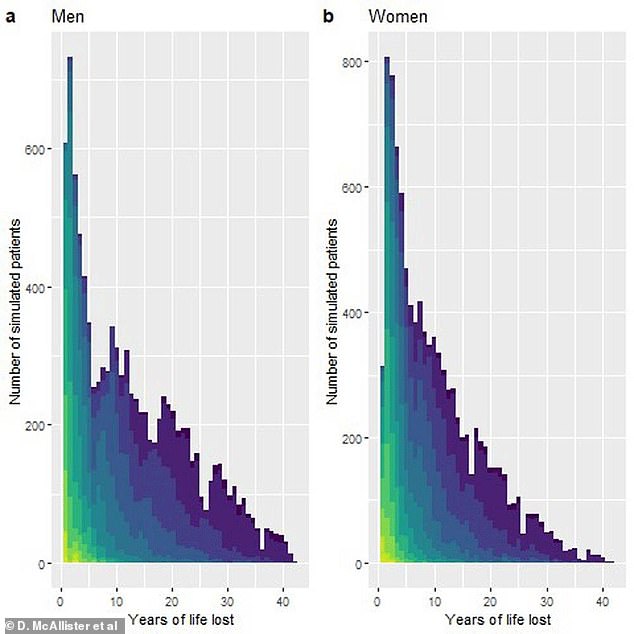 Men are losing, on average, 13 years of life to the coronavirus while women are losing 11. The number of years lost is usually higher the younger someone is when they die

Even people with long-term illnesses – known as morbidities – are having their lives cut short by many years, they said

ALMOST 90% OF PEOPLE WHO DIE FROM COVID-19 ARE OVER 65, REPORT REVEALS

Almost 90 per cent of people who die from coronavirus in England and Wales are over the age of 65, the report revealed today.

The data also revealed 23 people under the age of 29 had died after testing positive for the killer virus up until April 10, compared to 334 people in their fifties.

And men made up the largest proportion of COVID-19 deaths, representing 60 per cent (7,524) of the total.

The scientists, led by the University of Glasgow’s Dr David McAllister, wrote: ‘While media coverage of the pandemic has focused heavily on COVID-19 affecting people with “underlying health conditions”, adjustment for number and type of long-term conditions only modestly reduces the estimated years of life lost due to COVID-19.’

Their research was based on a study of COVID-19 patients in Italy and a sliding scale devised by the World Health Organization that is used to calculate how many years of life people lose to illness.

The vast majority of people – except those who live beyond 100 – lose life-years to some sort of condition or theoretically avoidable factor.

Studying the ages of people dying of the coronavirus, the Scottish researchers found that men lost, on average, 13 years and women 11 years, even when their other health problems are taken into account.

In England and Wales the most common age at which people died of COVID-19, up to April 17, was between 80 and 84, according to the Office for National Statistics.

The WHO’s years-lost scale explains a death at 81 is equal to 14 years of life lost.

The years of life lost for people in their fifties with no underlying conditions was around 35.81.

In comparison, it barely dropped for one morbidity (35.03). The figure was 29.67 for people in their fifties with two conditions – and 19.39 for those with five.

Dr McAllister and his colleagues explained that differences in the types of illnesses led to a ‘wide variability’ in the impact the virus had on their lives.

But their findings showed that even the most seriously ill patients who then died of COVID-19 lost ‘substantial’ amounts of time they would otherwise have lived.

They said: ‘Across most age and multimorbidity count [categories] the estimated years of life lost per person remained substantial and generally above five years.

‘This means that even after accounting for the multimorbidity count, most individuals lost considerably more than the “1-2 years” suggested by some commentators.’ 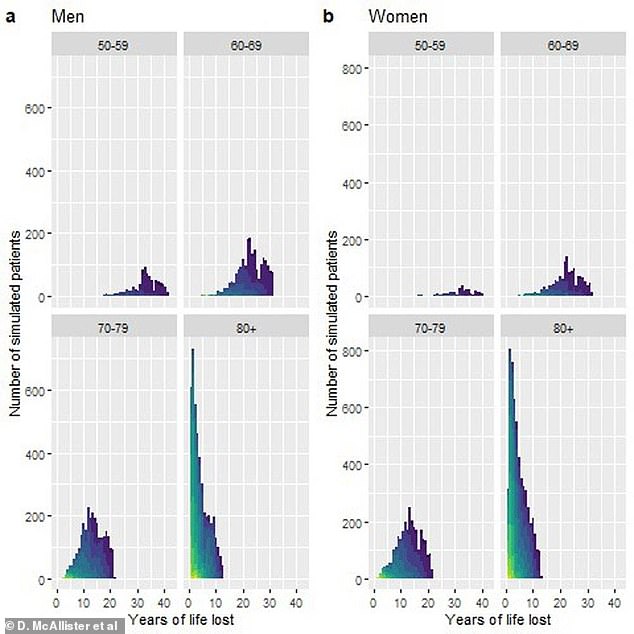 Although a majority of people who have died of coronavirus in the UK have had long-term health issues which made them vulnerable, healthy people and the young are dying, too.

There are regular reports of previously healthy people of every age, from their 20s to older than 100, dying of the virus.

And the Government had been criticised for, in the lead up to the UK’s epidemic, for trying to reassure the public that the disease was most dangerous for the minority – the elderly and the already ill.

Almost half of people in England, however, say they are living with a long-term health condition of some description.

The Scottish researchers, who focused on a study done on coronavirus victims in Italy, found that high blood pressure was the most common illness among people who died of COVID-19 – 73 per cent of all fatalities had the condition.

Dr McAllister and colleagues said: ‘Among patients dying of COVID-19, there appears to be a considerable burden in terms of years of life lost, [on par] with diseases such as coronary heart disease or pneumonia.’

The research was published on Wellcome Open Research without being reviewed by other scientists.