Coronavirus is unlikely to be spread through sex, scientists say – but they admit they can’t rule it out completely.

Semen samples of 34 men in China who had been diagnosed with mild symptoms of COVID-19 a month prior were analysed. Their tests were negative at the time of the study.

Scientists did not find any evidence of the virus in their semen, meaning the illness wouldn’t be sexually transmitted after recovery.

But the experts said they couldn’t rule out the possibility the virus would be in seminal fluid during the infectious period.

Questions also remain about patients who have been severely ill with the virus, who were not included in the study.

Experts have raised concerns that the virus could still enter the testicles, where sperm is produced, which could cause ‘long-term damage’.

This theory is based on how the virus enters cells – through a receptor called ACE2, which is present in cells all over the body.

But to the relief of the team in China, they found very little evidence ACE2 is present in testicular tissue.

They are still baffled, however, as to why a fifth of the men they studied have testicular pain while suffering with COVID-19.

A link between the virus and soreness in the groin area has been reported by international scientists. 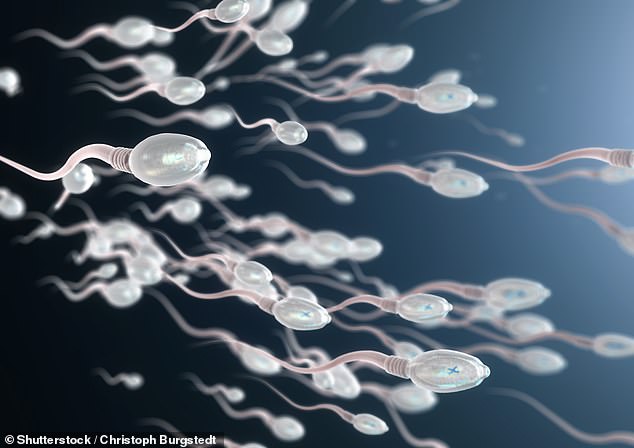 Coronavirus is unlikely to be spread through semen, scientists say, but they admit they can’t rule it out completely. Semen is the fluid the carries sperm (pictured)

The first and foremost question for the latest study, published in Fertility and Sterility, was: ‘Can the virus spread via semen?’

Urologist Dr James Hotaling, co-author of the study, at University of Utah Health, was relieved their findings suggested it did not.

He said: ‘If a disease like COVID-19 were sexually transmittable that would have major implications for disease prevention.’

And Dr Hotaling also warned that it may have had ‘serious consequences for a man’s long-term reproductive health’.

The international team of researchers were led by Dr Feng Pan, based at Huazhong University of Science and Technology, Wuhan.

They launched the study in response to concerns that SARS-CoV-2 could be sexually transmitted like Ebola or Zika.

WHY DO SCIENTISTS SUSPECT A LINK BETWEEN THE CORONAVIRUS AND TESTICULAR DAMAGE?

Urologists at Suzhou Affiliated Hospital of Nanjing University theorised that the coronavirus could cause testicular damage.

In a paper published on MedRxiv.org – a platform for papers that have not been peer-reviewed by other scientists to flag false claims – the team said their interest in COVID-19 was roused when it came to light that the coronavirus enters cells by binding to ACE2 receptors.

‘Several researches have indicated that some patients have abnormal renal function or even kidney damage in addition to injury in respiratory system, and the related mechanism is unknown,’ the team said.

‘This arouses our interest in whether coronavirus infection will affect the urinary and male reproductive systems.’

The team analysed ‘online datasets’ and found ACE2 expression in different human organs. The results indicate that ACE2 highly expressed in the mans tested, and can be concentrated in several cells which are directly related to the male reproductive abilities, including the germ cells, supporting cells and Leydig cells.

‘Therefore, virus might directly bind to such ACE2 positive cells and damage the kidney and testicular tissue of patients,’ they wrote.

They warned that doctors should pay close attention to possible damage in the testicles of coronavirus patients, especially if they are of reproductive age.

The warning was echoed by another team of scientists at Tongji Hospital, affiliated to Huazhong University of Science and Technology, is one of the hospitals designated by the government to treat coronavirus patients since an outbreak started in Wuhan in January.

Although the coronavirus mainly targets one’s lungs and immune system, the infection could result in ‘impairment of immune homeostasis in the testes’, which could cause orchitis – an inflammation of the testicles.

This in turn could reduce a man’s sperm count and possibly lead to infertility, according to the team who also noted the ACE2 theory.

They added that during the SARS outbreak in 2002 and 2003, medics observed serious immune system damage in the testicles of some male patients.

The hospital report was widely shared on social media despite being pulled from provincial government’s website just hours after being uploaded.

They collected semen samples from 34 Chinese men roughly a month after they were diagnosed with mild to moderate cases of COVID-19.

During their illness they had typical symptoms of a fever and a cough. Six patients (19 per cent) had pain in their scrotum at the time of diagnosis.

Laboratory tests did not detect SARS-CoV-2 in any of the semen samples. Semen is the fluid which carries sperm.

However, the study sample was very small and it didn’t look at semen samples when the donors were still positive for the infection.

And none of the semen donors had been severely ill with COVID-19.

‘It could be that a man who is critically ill with COVID-19 might have a higher viral load, which could lead to a greater likelihood of infecting the semen,’ Dr Hotaling said.

‘We just don’t have the answer to that right now. But knowing that we didn’t find that kind of activity among the patients in this study who were recovering from mild to moderate forms of the disease is reassuring.’

In a second part of the study, the team used a DNA database of three healthy young organ donors from previous research to investigate if testicular cells could be infected with the virus.

‘If the virus is in the testes but not the sperm it can’t be sexually transmitted,’ said co-author Dr Jingtao Guo, of the Huntsman Cancer Institute.

‘But if it is in the testes, it can cause long-term damage to semen and sperm production.’

The team were looking for the expression of two genes – ACE2 and TMPRSS2.

ACE2 is believed to be the doorway for the virus to enter cells in various parts of the body. It acts as a receptor on the surface of cells.

The virus uses the receptor to attach to the cell and attack it. Beforehand, it uses the enzyme TMPRSS2 to ‘prime’ itself.

ACE2 and TMPRSS2 must both be present in the same cell for the virus to effectively replicate, the academics said.

But they did not find any evidence to show high expression of the genes. Only four of 6,500 testicular cells carried the two genes.

The team concluded that it’s unlikely the virus affects testicles through an ACE2-mediated entry.

It goes against previous findings from researchers at Suzhou Affiliated Hospital of Nanjing University, who analysed ‘online datasets’ findings ACE2 was highly expressed in the man’s testes, and can be concentrated in several cells which are directly related to the male reproductive abilities.

Several studies have now investigated a link between the virus and testicles, with a minority of patients having reported testicular pain.

Six of the 34 men in this study had ‘discomfort in their scrotum’, but the ‘significance of this remains unclear’, Dr Pan and colleagues said.

They noted other viruses, such as mumps, HIV, and herpes, can cause inflammation in the testicles. This is called orchitis.

Despite the findings, the team warned that there is still the risk of an infected person spreading the virus when they have sex with someone else.

Even if people do not have symptoms of COVID-19 and ‘seem to be fine’, they may be carriers and infect others around them.

Doctor Aragona Giuseppe, GP and medical advisor at Prescription Doctor, said there currently is not enough information about the risks of sex amid the crisis.

He told MailOnline: ‘There hasn’t been too much information released about the dangers of sex.

‘However, with sex comes intimacy and we know being intimate with someone is not advised at the moment.

‘In short if the person you are near has the disease, the act of sex will most likely pass it on through this intimacy.’

It’s clear the coronavirus can be contracted through respiratory droplets which come from the coughs and sneezes of an infected person.

These droplets can land in the nose, mouth or eyes of people nearby or can be inhaled through the lungs.

‘Kissing is likely to transfer the disease across through saliva, as the other person may have droplets of it located in their mouth orifice,’ Dr Giuseppe said.

‘There hasn’t been too much research as of yet into whether it can be found in vaginal secretions or semen.

‘But obviously people need to take precaution when it comes to the transfer of bodily fluids through this type of close contact.’

And there has been no research to date on women and how their reproductive organs may be impacted.