A third of coronavirus patients admitted to NHS hospitals die from the disease and more than half of those on ventilators do not survive, according to a major study.

Researchers analysing almost 17,000 COVID-19 hospitalisations in the UK found 33 per cent died, 49 per cent were discharged and 17 per cent are still receiving care.

The study, the biggest of its kind in Europe, found just a fifth of intubated UK patients made it home alive.

Fifty-three per cent have died while on a ventilator and 27 per cent are still hooked up to the machines at the time of writing.

Of those in ICU, 45 per cent succumbed to the virus, 31 per cent went home after beating the illness and just under a quarter are still being treated.

Experts said the findings suggest the coronavirus could be as dangerous as Ebola – which kills roughly four out of every 10 people it infects.

Calum Semple, professor in outbreak medicine at University of Liverpool, said that ‘people need to get it their heads’ just how lethal the virus is.

He said while coronavirus infects many more people than Ebola, they have similar fatality rates when the illnesses lead to hospitalisation.

The bleak realities of the crisis were laid bare in a report by the International Severe Acute Respiratory and emerging Infections (ISARIC). 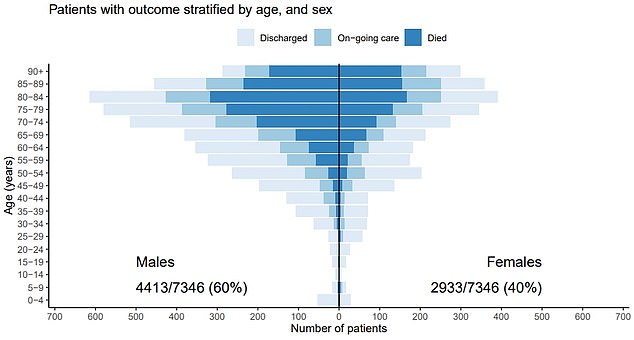 A third of coronavirus patients admitted to NHS hospitals die from the disease, the biggest COVID-19 study in Europe shows

Researchers analysing almost 17,000 COVID-19 hospitalisations in the UK found 49 per cent were discharged

It was conducted by a team of Britain’s top infectious diseases scientists who are part of the pandemic-planning global body.

The research looked at 16,749 admissions between February 6 and April 18 at hospitals in England, Scotland and Wales.

Commenting on the findings, Professor Semple said: ‘It’s a common misconception, even today, that Covid is just a bad dose of the flu.

‘Coronavirus is a very serious disease, the crude hospital case fatality rate is of the same magnitude as Ebola.

‘If you come into hospital with Covid disease and you’re sick enough to be admitted – and you have to be pretty sick these days to be admitted – the crude case fatality rate is sitting somewhere between 35 to 40 per cent.

‘That’s the same case crude case fatality rate for someone admitted to hospital with Ebola. People need to hear this and get it their heads. 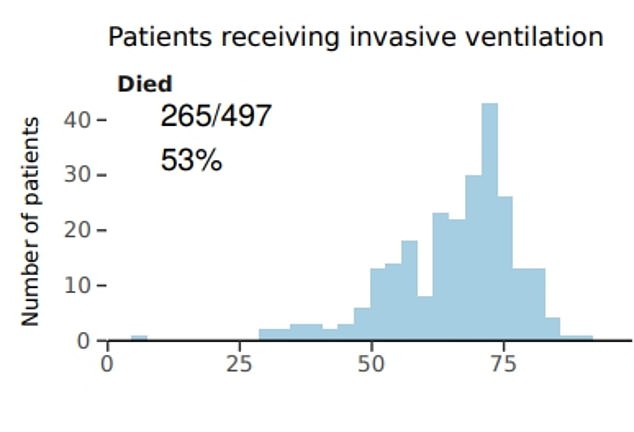 The study, by Britain’s top infectious diseases experts, found 53 per cent of intubated patients did not survive 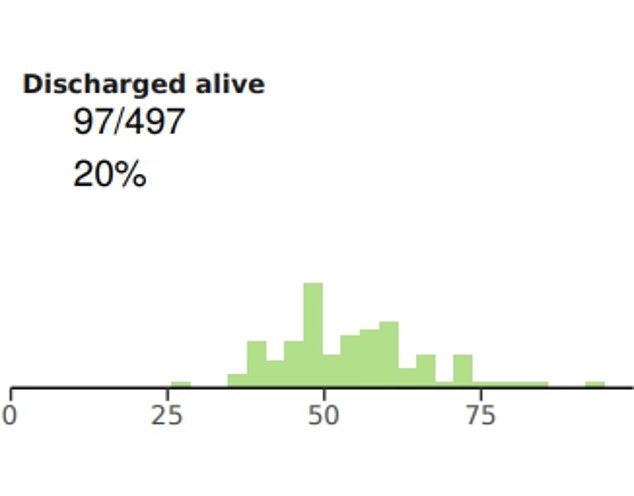 Just a fifth made it home alive, according to the paper by the pandemic-planning group 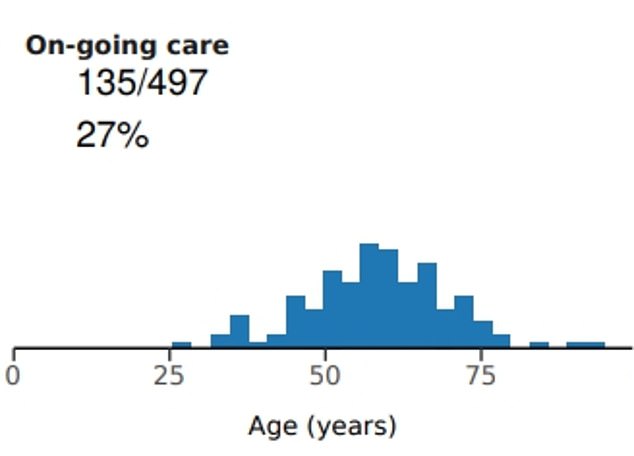 At least 4.2million people in the UK have been infected with the killer coronavirus, according to one of the best estimates of the disease’s death rate.

And London, which has been at the heart of Britain’s epidemic, is home to at least 935,000 people who have had the disease already.

The estimate is based on numbers from a  public health surveillance scheme in New York, which found that a quarter of the city’s population of 8million people had been exposed to the virus – meaning that the approximately 16,000 deaths recorded there represent a death rate of 0.79 per cent.

Other estimates from cities in Europe and a study by the University of California, Berkeley, put the virus’s death rate at between 0.19 and 0.5 per cent. In comparison, the death rate of flu is thought to be around the 0.1 per cent mark.

Extrapolating from these figures suggest that between 4.2 and 33.5million Britons have been infected with COVID-19, the vast majority of them untested, and between 935,000 and 3.8million people in London may have been ill already.

Officials have no idea how big the outbreak truly is because of a lack of widespread testing for people outside of NHS hospitals.

As of yesterday, 161,145 people had officially tested positive in the UK but the vast majority of these have been NHS hospital patients or staff. Countless members of the public are believed to have been infected and recovered without medical help.

Early surveys in major Western cities are now giving insights into the true death rate of the infection – that is, the proportion of people who die out of everyone who catches it, not just those who end up in hospital.

Applying these figures to the numbers of people known to have died in London and the UK as a whole can give a rough picture of how many people in the country might have been infected.

Office for National Statistics data today suggested that the true death rate of the UK’s coronavirus outbreak will ultimately be 55 per cent higher than the Department of Health’s daily updates show, meaning 33,596 people may already have died across the country along with 7,391 people in the capital city.

Professor Chris Whitty, the country’s chief medical officer, last week said he thought more than 10 per cent of people in London had caught the virus already – some 900,000 people – but that exposure was likely lower in other regions.

‘The reason the Government is keen to get people to stay at home until the outbreak is quietening down is that this is an incredibly dangerous disease. It doesn’t surprise me at all it’s a really nasty disease.’

The ISARIC study also revealed that most patients who fall ill enough to require treatment were aged between 57 and 82. The median age of those who fall victim to the disease is 80.

But one in 100 coronavirus sufferers needing hospital care are under the age of five, and one in 50 are 18 or younger.

The most severe symptoms of the disease appear to strike men more than women, with 60 per cent of admissions being male.

Pregnancy was not associated with an increased risk, the researchers note, in contrast with the flu which makes mothers-to-be more vulnerable.

Since the beginning of the outbreak, doctors have warned people with underlying health conditions are most likely to fall critically ill with the virus.

But the study found almost half (47 per cent) of patients had no reported comorbidities.

But the researchers noted there were also three distinct clusters of symptoms in certain regions of the body – the most common being in the respiratory system.

Another cluster was in the stomach and intestines, with patients suffering vomiting, diarrhoea and abdominal cramps.

The third encompassed musculoskeletal symptoms – including muscle and joint pain, and fatigue.

Writing in the paper, which has been published on the pre-print website MedRxiv and has not been peer-reviewed, the researchers said: ‘While most patients with COVID-19 experience mild disease, of those who have been admitted to hospital 14 days prior to data extraction, half have been discharged alive and one third have died.

‘Seventeen per cent of those admitted to hospital required critical care. Those who have poor outcomes are more often elderly, male and obese.

‘The near-real time analysis of data presented by this urgent public health study is allowing health policy makers to react dynamically to best evidence as it presents, such as expanded ICU capacity.

‘Our study is the first report in Europe of a very large and rapidly conducted study of COVID19, demonstrating the vital importance of putting plans in place for the study of epidemic and pandemic threats and need to maintain them.

‘It provides evidence of the pattern of disease in the UK population, identifies those sectors of the population at greatest risk and the use of healthcare resources.’