England, Scotland and Wales have announced 450 more deaths from the coronavirus today, taking the UK’s total death toll to 16,510.

The number is a fall on the 596 fatalities announced yesterday, Sunday, and half as many as were confirmed the day before that (888).

Although the statistics are known to drop after a weekend, the sharp fall adds to growing evidence that the peak of the UK’s epidemic has blown over.

At least 120,000 people in Britain have been officially diagnosed with the virus since the epidemic began in late February, and more will be announced later today.

The Department of Health will also release grouped data about how many more people have died in Scotland, Wales and Northern Ireland.

It comes as a medicine professor at the University of Oxford has suggested the UK’s outbreak may have peaked before the nationwide lockdown had even begun. 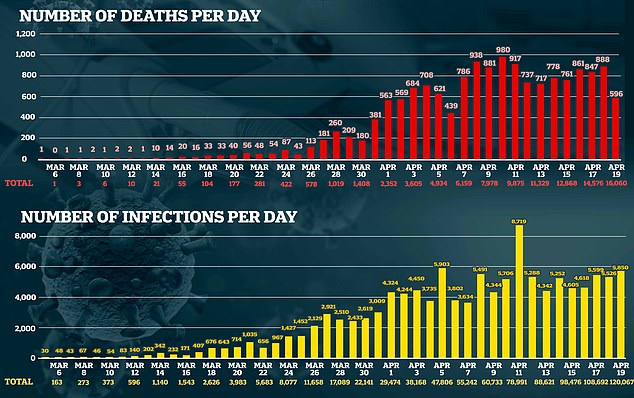 NHS England confirmed this afternoon that a total of 14,829 people have now died in its hospitals and tested positive for COVID-19.

The patients whose deaths were announced today were aged between 40 and 101 years old, and 15 of them had no health problems before catching the virus. The youngest of those was 49.

Just 85 of the deaths recorded happened yesterday, on April 19. 210 of the people counted in today’s statistics succumbed to the virus on Saturday, April 18.

‘We still have a ways to go’ on antibody testing, Fauci warns

How NHS medics can now RE-USE masks and gowns