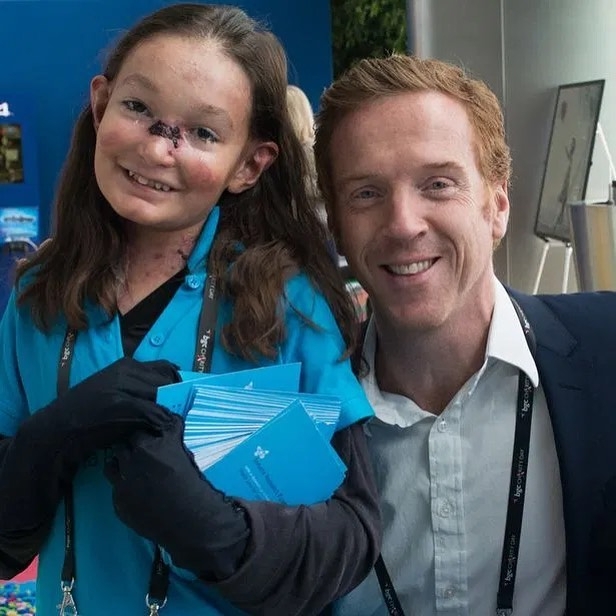 ACTOR Damian Lewis has urged fans to sponsor a mum who is running her TWELFTH marathon in a year to help her sick daughter.

Mum Sharmila Collins is running the London marathon to fund research for her 19-year-old daughter’s rare genetic disorder which causes her skin to wound and blister.

Sharmila, the founder of the charity Cure EB, is desperately looking for a cure for her daughter Sohana’s devastatingly painful genetic skin disorder called Epidermolysis Bullosa.

And despite saying she “hates running,” the mum is determined to keep going because she “hates EB more.”

Sohana, 19, says she can’t remember a day when she wasn’t in pain as her delicate skin blisters and wounds with the smallest amount of friction.

Supporting the cause, Billions star Damian said: “I am extremely proud to be a patron of Cure EB. The pain Sohana has to live with daily is unimaginable.

“Her condition will worsen and we now have a race against the clock to find and fund effective treatment.

“Sharmila is incredibly driven and relentlessly focused on improving not only her daughter’s life but also those of other children with this terrible condition.

“She has raised millions of pounds for research into EB, at times single-handedly.

“It’s hard enough to run one marathon but 12 in a year is extraordinary, particularly when Sharmila works so hard every day to find a cure for EB. I am in awe of her.

“Please sponsor Sharmila and help change the lives of these children and young people.”

The 19-year-old was born with the rare condition that causes dangerously fragile skin.

Her devoted mum Sharmila has spent much of her life since then fighting to find a cure.

Sharmila, 52, from Islington, North London, says: “Sohana has never known a day without pain but she amazes us with her sunny, positive outlook on life.

“During the pandemic, normal fundraising events like dinners or sponsored walks have been impossible. I had to think creatively about what I could do.

“I ran the virtual London marathon in October 2020 and felt OK afterwards so I kept on doing marathons on my own. I have run 26.4 miles around Regents Park, London, once a month since.

“I hate running but I hate EB more. I intend to keep running monthly until I have raised £1million.”

Mum-of-four Sharmila set up Cure EB in 2011 – and the charity has raised millions to fund research.

Damian Lewis, who plays hedge fund boss Bobby Axlerod in Billions, has been an enthusiastic patron for Cure EB taking part in the BGC Partners’ annual Charity Day in September to raise money.

EB affects 500,000 people around the world – and is caused by a genetic mutation that makes a patient’s skin extremely fragile.

Any friction to the skin causes open wounds and blistering and can lead to skin cancer.

Daily management, including painful popping of blisters and bandaging, is required.

Cure EB is helping scientists make headway in vital research and the charity has funded the first half of a clinical trial into gene-corrected skin grafts that have the potential to permanently heal damage.

You can support Sharmila’s fundraiser here.

We pay for your stories!

Do you have a story for The Sun news desk?

Share
Facebook
Twitter
Pinterest
Previous articlePeople not fully vaccinated against Covid are 57 TIMES more likely to die, Fauci says
Next articleJust NINE cases of Covid were detected among 7,000 children and staff at summer camps i

Diabetes type 2: Worst breakfast choices which will increase symptoms of...