Elderly coronavirus patients could be given anti-ageing drugs to restore their ‘young’ immune system and help them fight the coronavirus, scientists say.

Over 80 per cent of COVID-19 hospitalisations are those over 65 years of age with a greater than 23-fold increased risk of death.

As a person ages, their immune system becomes suppressed and it takes longer for their body to recognise and attack the virus.

It gives the virus time to replicate and cause serious disease – which may be heightened by pre-existing health conditions.

But Harvard scientists say this could be fixed with NAD boosters, a relatively new class of anti-ageing supplements.

Lower levels of NAD+ in the body as a result of ageing are thought to impair biological functions important to health, which might contribute to age-related diseases.

One of the paper authors sees NAD as the ‘closest we’ve gotten to a fountain of youth’. 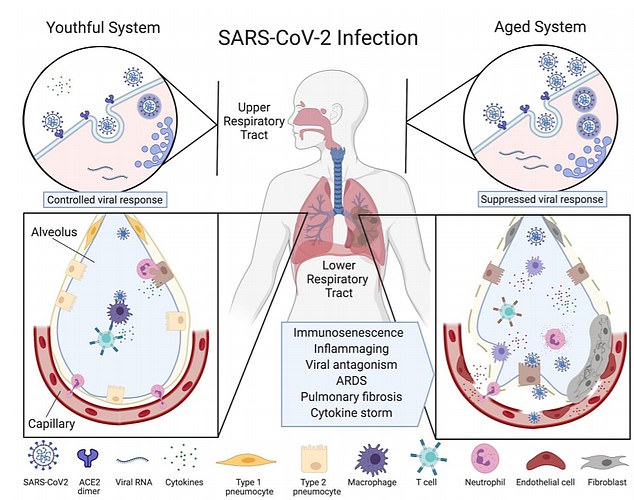 The Harvard paper described how the immune system of the young and elderly differ. In a young person (left), immune cells directly kill the virus in the upper respiratory tract, preventing the spread of disease. In an old person (right), the viral alert signals are slow, resulting in replication and spread to the lower respiratory tract. The knock on effect leads to a range of unwanted processes, such as inflammation 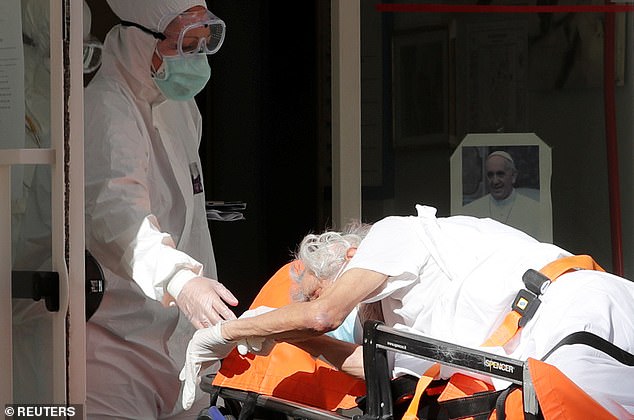 Elderly coronavirus patients could be given anti-ageing drugs to restore their ‘young’ immune system to fight the coronavirus, scientists say. Pictured, an old patient in Italy, May 2

The Harvard paper, which is yet to be peer reviewed by other scientists, said: ‘The most exciting and potentially impactful technologies to treat Covid-19 are those that activate the body’s defences against ageing.

‘It may even be possible to reset the age of cells and tissues so currently high-risk individuals can respond to viral infections as though they were young.’

Even though the science is still developing, the available evidence supports the notion that older people are more at risk of the coronavirus.

For example, NHS data shows of hospitalised COVID-19 patients, 72 per cent are over the age of 60 – 58 per cent of which are men.

More than half of deaths have been in those over 80.

The Blavatnik Institute at Harvard Medical School team said the severity of coronavirus symptoms experienced by a patient depend on how their body responds to the virus when it enters the body.

The presence of already existing health conditions, such as heart disease and diabetes, fail to explain exactly why the elderly are less resilient, the team said.

An effective immune system response is to recognise the virus, alert the body to it and then destroy it with speed and then clear it from the body.

In a young person, immune cells recognise the SARS-CoV-2 virus when it first enters the upper respiratory tract.

The immune cells act appropriately to directly kill the virus and infected cells, preventing the spread of the virus.

These mechanisms are ‘known to be dysfunctional’ in the elderly, the paper, authored by three scientists, said.

Viral alert signals are slow, resulting in greater viral replication and the movement of the virus into the lower respiratory tract where it can infect more cells.

During ageing, the immune system changes in two fundamental ways which are ‘major drivers of the high mortality rates in older patients’, according to the research.

Firstly, there is a gradual decline in immune function, called immunosenescence, which hampers the body’s ability to recognise pathogens and respond to them effectively.

The second immune change is a chronic increase in inflammation. It means the body overzealously registers the presence of a pathogen but fails to effectively respond to it.

The team added that in half of fatal COVID-19 cases, the patient experienced a cytokine storm – 82 per cent of whom were over the age of 60.

A cytokine storm is when chemical-signalling molecules which guide a healthy immune response become overactive and go haywire.

It exacerbates symptoms and triggers inflammation in major tissues such as the lungs, kidneys, liver and brain. 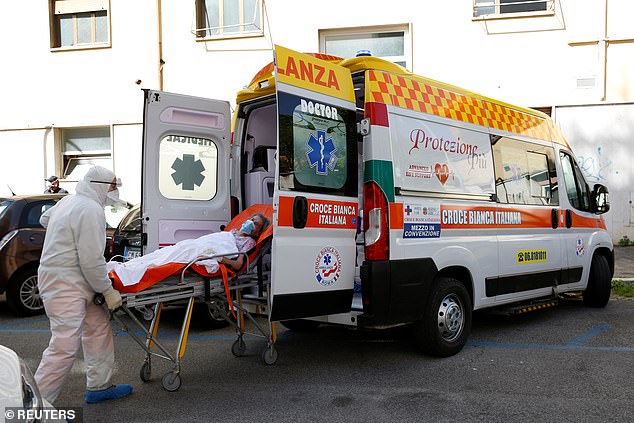 Immune response mechanisms are ‘known to be dysfunctional’ in the elderly, the paper said. Pictured, a patient carried from a nursing home into an ambulance in Rome, May 2 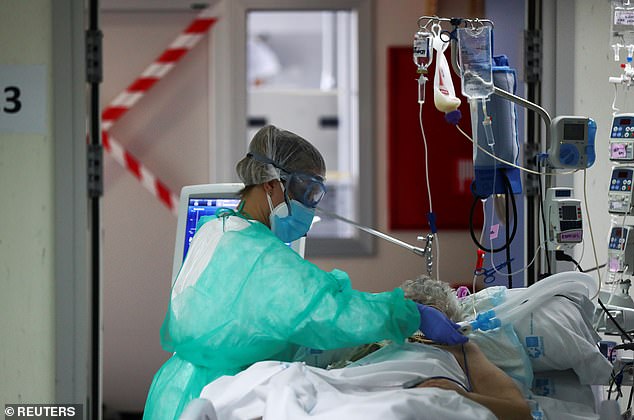 David Sinclair, an author of the recent Harvard paper, said at the time: ‘NAD+ is the closest we’ve gotten to a fountain of youth’. Pictured: an elderly COVID-19 patient in Spain

Why the elderly are more at risk of a cytokine storm is not known, but there are some ideas – one of these being a decline in levels of NAD+, or nicotinamide adenine dinucleotide.

‘Stiff’ lung tissue seen in the elderly may be why the novel coronavirus is more deadly to older patients, a new review article suggests.

The virus invades mucosal cells – cells that produce mucus – before multiplying and spreading throughout the body.

Researchers say the virus replicates itself better in these stiff cells, found in the lungs and upper respiratory tracts of older people, which allows the disease to spread faster.

The team, led by the Massachusetts Institute of Technology, says its findings indicate the prevalence of the virus may not be due to the weakening of the elderly’s immune systems as many scientists suspect.

When humans are infected with the new strain, known as SARS-COV-2, the virus first attacks cells that secrete mucus in the respiratory tract.

After the virus invades a cell, it ‘hijacks’ the machinery of the cells to replicate itself thousands of times.

In older people, tissue in the lungs and respiratory tract are stiffer due to a larger supply of protein fibers, according to the researchers.

The researchers say stiff cells ‘favor the multiplication of the virus’ meaning they replicate themselves easier.

‘Biopsies or cell culture experiments could now be used to determine whether this is indeed the case,’ they wrote.

The team says this could help scientists determine where to focus their efforts as they research and develop drugs to fight against the virus.

NAD+ lowers as we age, which results in the depression of other important proteins and enzymes, and the surge of others.

NLPR3, centrally responsible for the activation of inflammatory responses, are thought to be hyperactivated when NAD+ levels drop.

It doesn’t help that NAD+ levels are depleted during the course of COVID-19, according to early research.

And, there is ‘increasing evidence that lower NAD+ levels in the lung and vascular endothelium contribute to poor Covid-19 outcomes’.

The team envision a ‘two-step model’ whereby inflammation increased due to ageing, and the hyperactivation by SARS-CoV-2 triggers a cytokine storm.

There is scarce evidence that NAD boosters work. They have only started to creep onto the market in the last 10 years or so.

But a 2017 study published in the journal Science found that boosting NAD+ levels in mice reversed the signs of aging in the tissue and muscles of older mice.

The reversal was so drastic that researchers could no longer tell the difference between four-month-old mice and two-year-old mice, Futurism reported.

Though it was on animals, the study strongly suggests that boosting NAD+ levels in humans could have health benefits by optimising cellular health.

David Sinclair, an author of the recent Harvard paper, said at the time: ‘NAD+ is the closest we’ve gotten to a fountain of youth.

‘It’s one of the most important molecules for life to exist, and without it, you’re dead in 30 seconds.’

The team also said NAD boosters and other techniques may be needed to improve the effectiveness of vaccines, which typically are weaker in the elderly.

They write: ‘In the aged, immune responses to vaccination are often weak or defective…Therefore, in designing vaccines against SARS-CoV-2, it will be important to consider that older people may not respond as well to vaccines as young people.’

The academics concluded that research into older people will be essential for understanding the threat of the virus among different ages.

There is still ‘much to be elucidated’ about the varying effects of Covid-19 on people of different ages.