Employees who deliver ‘service with a smile’ may be more likely to drink heavily, research suggests.

A study found people in public-facing jobs who often force a grin or resist an eye-roll are more likely to hit the bottle at the end of the day.

Researchers believe those who feel they have to ‘control’ their emotions at work – such as nurses, call-centre workers and baristas – may ‘let loose’ when home because faking a grin is ‘draining’. 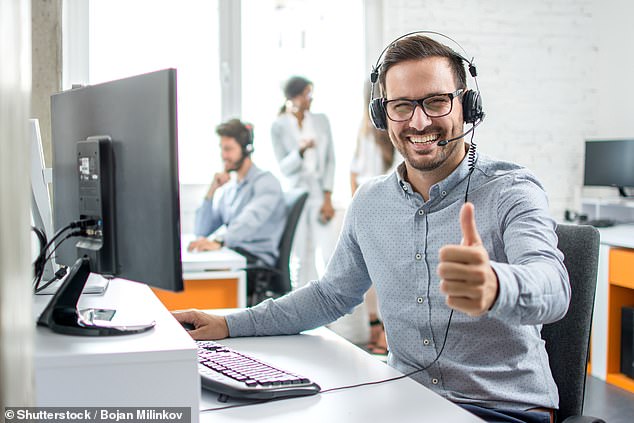 The research was carried out by Pennsylvania State University and the University at Buffalo. It was led by Alicia Grandey, professor of psychology at Penn State.

‘Faking and suppressing emotions with customers was related to drinking beyond the stress of the job or feeling negatively,’ Professor Grandey said.

”It wasn’t just feeling badly that makes them reach for a drink.

‘Instead, the more they have to control negative emotions at work, the less they are able to control their alcohol intake after work.’

Past studies have found a link between service workers and excessive alcohol consumption, however, the reason why this occurs was unclear.

To try and uncover the mystery, the researchers analysed data from the National Survey of Work Stress and Health.

This involved looking at the phone interviews of 1,592 workers in the US. The employees were asked how often they faked or suppressed emotions – known as ‘surface acting’ – and how much they drank after work.

Results – published in the Journal of Occupational Health Psychology – suggest workers who interact with the public drink more than those who do not.

And those who ‘surface act’ also drink more, particularly if they feel they lack control at work.

‘The relationship between surface acting and drinking after work was stronger for people who are impulsive or who lack personal control over behavior at work,’ Professor Grandey said.

‘If you’re impulsive or constantly told how to do your job, it may be harder to rein in your emotions all day, and when you get home, you don’t have that self-control to stop after one drink.’

Results further revealed people in jobs that require one-on-one time with customers – such as call-centre or coffee-shop workers – drink more than those who in education or healthcare.

This may be because customer-facing jobs tend to be filled by younger people in an entry-level position, according to Professor Grandey.

These employees may lack self control and view ‘surface acting’ as necessary in order to earn money, she adds.

‘Money gives you a motivation to override your natural tendencies, but doing it all day can be wearing.’

Surface acting may also have a negative impact on an employee if they feel their job is unrewarding.

‘Nurses, for example, may amplify or fake their emotions for clear reasons,’ Professor Grandey said. ‘They’re trying to comfort a patient or build a strong relationship.

‘But someone who is faking emotions for a customer they may never see again, that may not be as rewarding and may ultimately be more draining or demanding.’

The researchers hope their study will empower employees to create a healthier work environment.

‘Employers may want to consider allowing employees to have a little more autonomy at work, like they have some kind of choice on the job,’ Professor Grandey said.

‘And when the emotional effort is clearly linked to financial or relational rewards, the effects aren’t so bad.’

DO YOU DRINK TOO MUCH ALCOHOL? THE 10 QUESTIONS THAT REVEAL YOUR RISK

One screening tool used widely by medical professionals is the AUDIT (Alcohol Use Disorders Identification Tests). Developed in collaboration with the World Health Organisation, the 10-question test is considered to be the gold standard in helping to determine if someone has alcohol abuse problems.

The test has been reproduced here with permission from the WHO.

To complete it, answer each question and note down the corresponding score.

0-7: You are within the sensible drinking range and have a low risk of alcohol-related problems.

Over 8: Indicate harmful or hazardous drinking.

8-15: Medium level of risk. Drinking at your current level puts you at risk of developing problems with your health and life in general, such as work and relationships. Consider cutting down (see below for tips).

16-19: Higher risk of complications from alcohol. Cutting back on your own may be difficult at this level, as you may be dependent, so you may need professional help from your GP and/or a counsellor.

20 and over: Possible dependence. Your drinking is already causing you problems, and you could very well be dependent. You should definitely consider stopping gradually or at least reduce your drinking. You should seek professional help to ascertain the level of your dependence and the safest way to withdraw from alcohol.

Severe dependence may need medically assisted withdrawal, or detox, in a hospital or a specialist clinic. This is due to the likelihood of severe alcohol withdrawal symptoms in the first 48 hours needing specialist treatment.

Cancer symptoms: The colour patch on your tongue that could signal the deadly disease