Becoming infected with coronavirus undoubtedly tops the list of current health fears for most Britons. But getting fat seems to come a close second – at least that’s the impression I get from social media.

Everywhere I look, there seems to be yet another warning about the link between obesity and an untimely death from Covid-19. And the scale of such panic became clear following my column last month – a passionate ode to the joys of a custard cream.

Lots of people were already furious that food parcels being sent to vulnerable people during the lockdown included a packet of the humble biscuit. 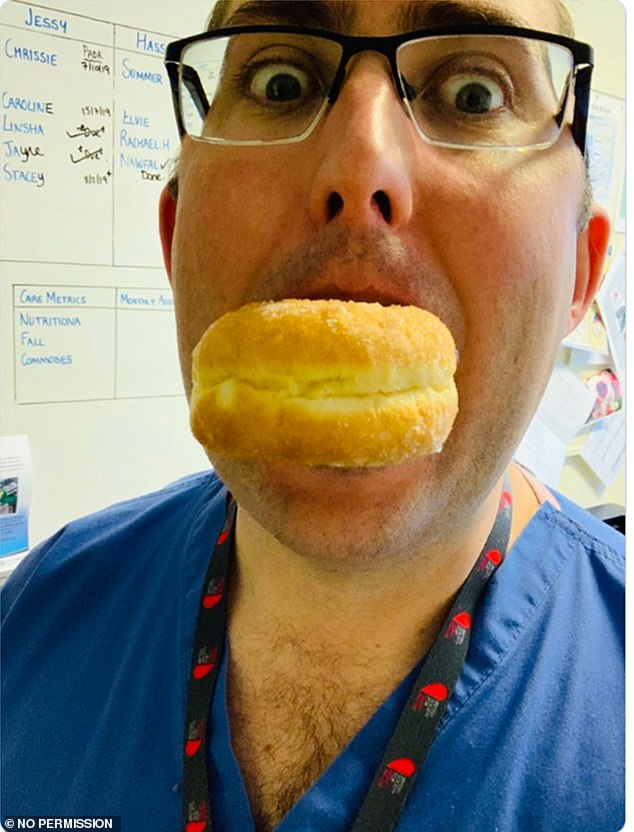 Cardiologist Jason B O’Neill, pictured, was one of a number of health workers posting selfies with a mouthful of doughnut in response to restrictive eating messages

But in my column, I suggested that now was not the time to deny ourselves some simple pleasures – not least because evidence shows that dieting in times of emotional and social instability is unlikely to have any positive impact.

But judging by the hundreds of messages I received, you would have thought I’d incited mass murder. Diet zealot Ivor Cummings told his 50,000 Twitter followers that my argument was ‘devious and misleading’.

Cardiologist Dr Aseem Malhotra, who has 66,000 Twitter followers, branded it ‘fake news’, adding: ‘This is how democracy dies.’ Others accused me of ‘endangering’ the British public.

In one widely shared article, Professor Robert Lustig, a paediatric endocrinologist at the University of California, San Francisco, said: ‘Ultra-processed food sets you up for inflammation that Covid-19 is happy to exploit. Just another way ultra-processed food kills.’

Now I can see some logic in these arguments. It’s undeniable that some of the health conditions caused by excess body fat – such as high blood pressure, type 2 diabetes and respiratory problems – reduce the chances of surviving Covid-19.

And, of course, a diet filled with high-calorie ‘junk’ is more likely to cause weight gain.

But there is no concrete evidence that ultra-processed food alone is a direct cause of obesity-related health conditions.

Most of the research regarding manufactured food is flawed due to varying definitions of what constitutes ‘processed’. And studies rarely account for other risk factors that often apply to people who eat lots of this type of food – they tend to be poorer, for example. 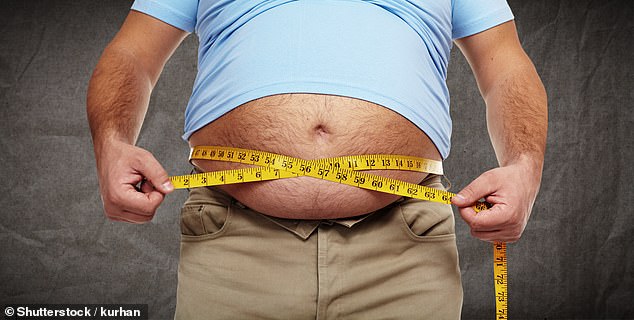 There is no concrete evidence that ultra-processed food alone is a direct cause of obesity-related health conditions, writes EVE SIMMONS

Nor is there scientific grounding for the assertion that those who eat more high-calorie foods are more likely to die from coronavirus.

A recent audit of our intensive care units revealed that having a BMI over 25 – the level at which a person is deemed to be overweight – makes you no more likely to end up in hospital with Covid-19 than someone of a healthy weight.

But this fact hasn’t stopped the diet brigade from ramping up their campaign. On Good Morning Britain, Dr Malhotra suggested that Boris Johnson required hospital treatment during his fight with the virus because of his weight.

He said: ‘Now it is an observation, but it does fit with the evidence. Boris, unfortunately, is significantly overweight. People with obesity also seem to spread the virus for a much longer period of time and also clearly get sicker.’

Dr Malhotra also condemned a donation last week of 1,500 doughnuts by popular brand Krispy Kreme to the hard-working staff at Barnet Hospital in North London. ‘Utterly shameful,’ he commented in response to an NHS diabetes doctor’s celebratory tweet about the gift. And he wasn’t the only doctor criticising the company. 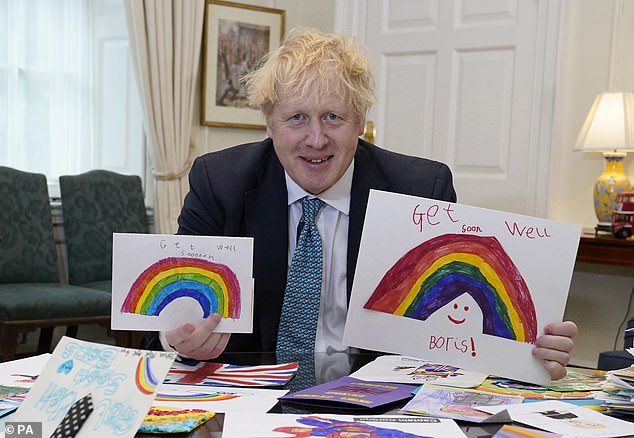 Cardiologist Dr Aseem Malhotra suggested that Boris Johnson, pictured with get well cards, required hospital treatment during his fight with the virus because of his weight

As someone who has recovered from anorexia – and as a strident campaigner for awareness of people with eating disorders – I’ve long taken issue with these restrictive eating messages, not to mention their scientific inaccuracies.

Usually, there is just a small group of eating-disorder campaigners railing against this anti-food drivel. But not this time. Eminent cardiologists, gastroenterologists, nutritionists and obesity researchers all united against the ‘patronising’ advice. And their method of attack was brilliant – posting selfies with a mouthful of doughnut.

One of the country’s leading cardiologists, Dr Chris Gale, at Leeds Teaching NHS Trust, tweeted a note of thanks to high-street chain Greggs alongside a picture of a gooey jam doughnut. ‘It would be disgraceful of me to refuse such an offer of kindness,’ he said after the chain donated food to staff.

Even supporters of the anti-junk-food lobby recognised that now was not the time to panic about enjoying the odd treat. Harley Street cardiologist Dr Ravi Assomull said: ‘Surely we need to be kind to each other in these times, when all NHS staff are under unprecedented pressure?’ Yes, we do.

What is most baffling to me is that the food-shaming tactics used by these diet doctors don’t work. One influential 2007 study, published in the Journal Of Social And Clinical Psychology, showed that women who received confidence-boosting messages while eating doughnuts and sweets ate less than those listening to guilt-inducing ones.

Previous studies show that those who hear positive messages while eating think rationally about the amount they consume and stop when they are full. 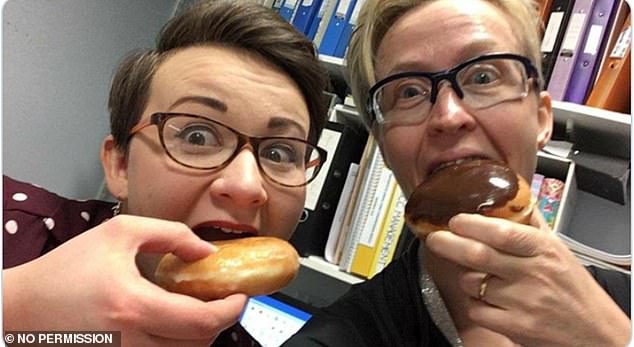 Medical staff working on the front line of the coronavirus crisis tuck into a snack on their break, pictured

On the other hand, those who feel guilty show greater activation in the emotional hub of the brain – setting up a cycle of emotional eating. ‘Inciting fear about food or body weight won’t make anyone healthier,’ says Dr Giles Yeo, a Cambridge University geneticist specialising in obesity.

‘It just increases stress which, if anything, will make you eat more. And changing your diet now will not save you from coronavirus. Of course, be as sensible as possible but now isn’t the time for strident food rules. We need to give ourselves a break and reduce anxiety. Scaremongering right now is unforgivable.’

But what’s the real harm?

Well, the BBC demonstrated this perfectly last month in a poorly timed programme which was advertised as a ‘science experiment’. About two million viewers tuned in to BBC2’s The Restaurant That Burns Off Calories. Presented by Fred Sirieix – the French maitre d’ from dating show First Dates – and GP Zoe Williams, it examined the amount of exercise needed to burn off our favourite meals.

While 20 diners enjoyed a leisurely slap-up meal, another set of participants next door were working up a sweat on a variety of exercise machines. Collectively, they had to burn off the same amount of calories the diners were consuming between them.

Apart from being scientifically flawed, the ‘experiment’ carried some deeply troubling messages: that our meals must be earned and that eating too much requires some form of punishment. 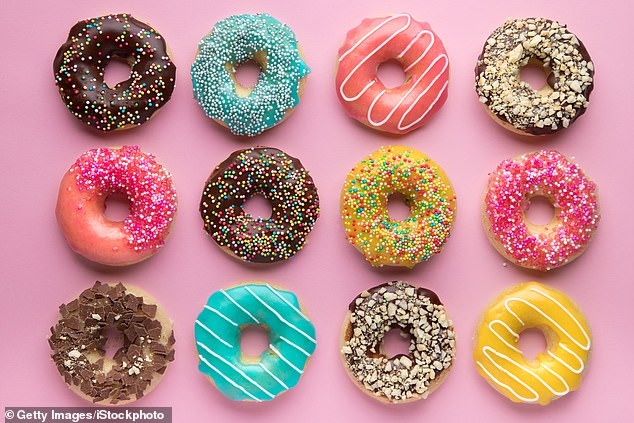 One influential 2007 study, published in the Journal Of Social And Clinical Psychology, showed that women who received confidence-boosting messages while eating doughnuts, pictured, ate less than those listening to guilt-inducing ones

This mindset will be all too familiar to anyone who’s had a tumultuous relationship with food. Not surprisingly, the UK’s biggest eating-disorder charity, Beat, kept its helplines open for an extra three hours to help sufferers cope with the fallout.

SWARMS of complaints were lodged with broadcast regulator Ofcom and the BBC, while I personally received a flood of messages from young patients, asking for advice for coping with food anxiety – anxiety sparked by watching the show for just a few minutes.

‘In the week that the programme aired, calls to our helpline shot up by almost three-quarters,’ says Caroline Price, Beat’s director of services.

‘About 90 per cent throughout the week mentioned the programme. Some of them just had to watch the trailer or see the publicity and that was enough to trigger or reinforce that restrictive, controlling mindset. Everyone seems to forget that people die from this illness.’

What’s the difference… between blood and plasma?

Blood is made up of several major components. It has red cells to transport oxygen to organs and remove waste.

It also has platelets to trigger clotting after an injury and white cells to battle infection.

More than half of your blood comes in the form of a straw-yellow liquid called plasma.

This contains the red and white blood cells and platelets, as well as nutrients, proteins and hormones – and carries them around the body.

It also contains antibodies released by the immune system to help fight infections such as Covid-19.

And the severely mentally ill weren’t the only ones affected. ‘We also had calls from people who didn’t even have a diagnosed eating disorder, but it made them feel anxious about what they eat,’ says Caroline.

Dr Christopher Huebel, researcher in developmental psychiatry from King’s College London, adds: ‘The programme could definitely trigger a relapse in people who were otherwise recovered.’ It was for that very reason that I switched off myself – the risk simply wasn’t worth it.

Sadly, my attempts to warn BBC bosses and Fred Sirieix of the potential harm, via a series of tweets, fell on deaf ears. Fred replied: ‘Enjoy the show later x.’ In another (since deleted) tweet, he referred to some eating-disorder sufferers as ‘idiots’.

Interestingly, Dr Yeo, one of the experts on the show, was critical of it afterwards. ‘If I’d had any idea this was how the show would be presented, I would never have taken part,’ he told me.

He added: ‘I was very disappointed at the finished product. It stripped the issue of all nuance, which is crucial when discussing a healthy diet. Quite frankly, it ended up trashy.’

Another expert on the programme, Professor Tim Spector, a nutrition researcher from King’s College London, has also expressed ‘disappointment’ with the final format.

It’s not just people with eating disorders who get burned from viewing food as simply the sum of its calories. A 2010 US study found that women counting calories for three weeks saw significantly increased levels of the stress hormone cortisol.

Other studies have shown that those who consider low-calorie foods as ‘good’ and high-calorie items as ‘bad’ eat higher quantities of ‘bad’ foods, compared with those who do not judge food.

Dr Yeo explains: ‘No single food is bad. Thinking about it like that only sets you up to fail, especially at times when emotions are running high – like right now.’

Commenting in the British Medical Journal about the Krispy Kreme outrage, Partha Kar, an NHS England adviser on diabetes, said: ‘These are extraordinary times where people are looking for a break. I think this does more harm than good.’

Psychologist Dr Huebel says: ‘At the moment, our freedoms have been taken away and many people feel out of control.

‘It’s common in unstable times like this for people to fixate on something they can control, like food. It is a distraction from the scariness of the unknown.’ 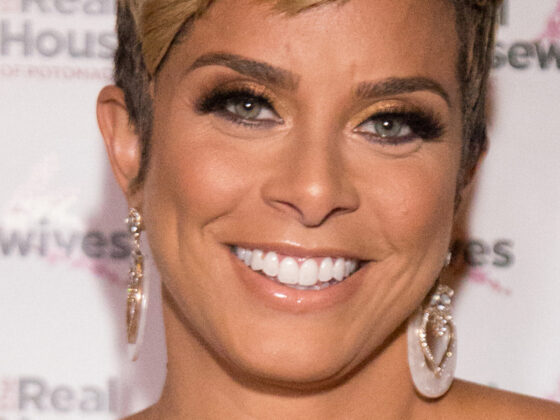