A battling dad fulfilled his last wish to ‘die a married man’ when he tied the knot with his bride – just hours before passing away.

Gary Smart, 33, had hoped to wed Laura Smart, 31, next year but the couple changed their plans when he was diagnosed with terminal cancer last month.

The father of six had aggressive lung cancer and was given just days to live when he told staff at Northampton General Hospital he wanted to die a married man. 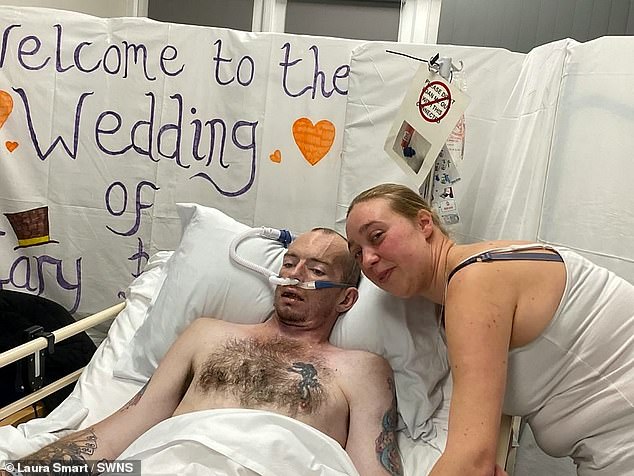 Heartbreaking photos show him holding hands and exchanging vows with Laura as he lay in his hospital bed last Friday (18/10) evening.

After the touching ceremony, which included a hastily arranged buffet in the ward for guests, Laura lay down with her new husband. Tragically, just seven hours later Gary passed away with his new bride at his side.

Laura, who has a daughter from a previous relationship, said: ‘After Gary was diagnosed with terminal cancer he told me he wanted to die a married man. 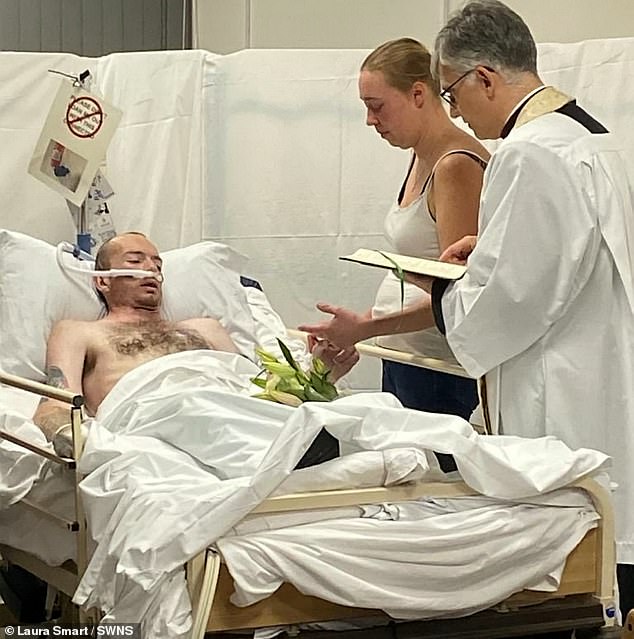 The couple married in hospital after Gary was given a terminal diagnosis last month (pictured, right, couple’s first kiss as man and wife)

‘We thought we might have more time together but it wasn’t to be. Last Friday staff said it wouldn’t be long and they helped us organise our wedding.

‘Mum and I went out, got the rings, came back and we were told the staff had sorted it all.

‘They said, ‘We’ve got your special marriage licence and a priest. You’re getting married at seven o’clock.’

In just an hour more than 25 family and friends dashed to the hospital to witness the couple exchange vows.

Laura said: ‘We had about 25 people there. We said we should have done it years ago.

‘It was like everyone was saying goodbye to him at the same time. We all knew he was going to go. 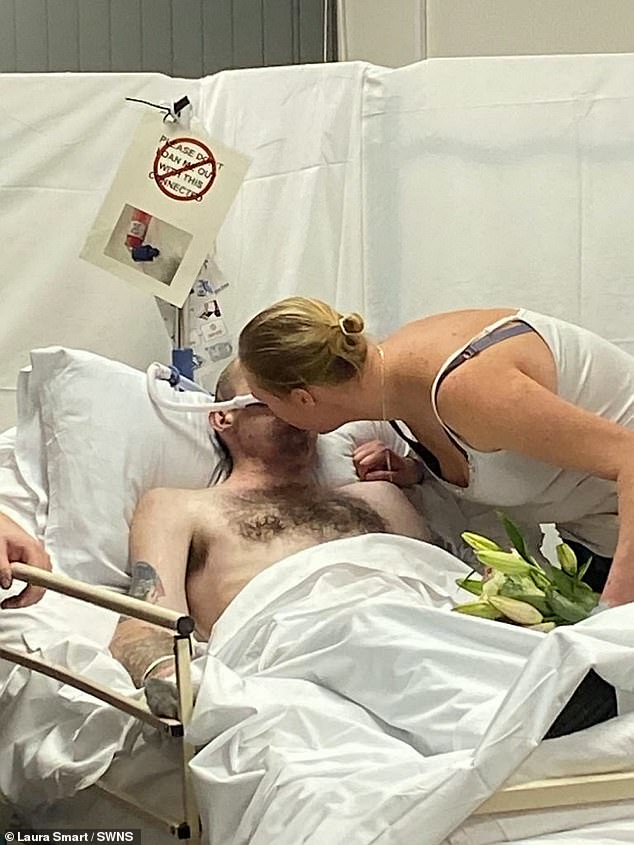 ‘He managed to say his vows and put the ring on my finger and give me a kiss. That night I laid in bed with him. We watched Fast and Furious 8 as he was into cars. I managed to fall asleep and woke up when the call button went off at 3am.

‘I looked at Gary and he was staring at me, like he was trying to reach out to me. I had a conversation with him and then realised, his oxygen mask was not on right and he wasn’t breathing. We only had seven hours of marriage but I was so grateful I could give him that.

‘He was a kind, lovely man. He loved his cars. He was always building things, offering to make things for people. 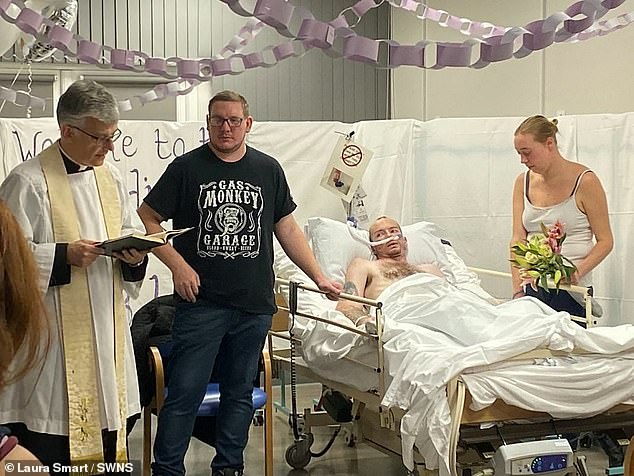 ‘If anyone messaged him saying ‘I’ve got problems with my car’ he would be straight there, wanting to help out.

‘He was very selfless and caring. Last year, I was off work for a while with an infection and he knew I couldn’t afford Christmas.

‘He went out and bought presents for my daughter. As long as his kids got what they needed, that was all that mattered. The kids always came first.’

The couple met when they were teenagers but split up before getting back together in their late 20s.

Gary, from Northampton, started feeling poorly in July when he came home from work with a bad back and complaining of chest pain.

He started losing weight and was unable to sleep so went to the doctors who ordered an X-ray and drained fluid from his lungs.

Laura added: ‘The doctors said they had found something but they didn’t know what it was so they did a biopsy.

‘We got him home but he was clearly still in pain. He wasn’t eating properly and was very weak. We took him back to the doctors, but a different one this time.

‘The GP was concerned about lumps that had appeared on his body and on his lymph nodes.

‘We went back into hospital and went straight on to the admittance ward for five days.

‘On the 29th of September, we were told that Gary had an aggressive form of lung cancer and he just got worse. He was a wonderful man and I was proud to be his wife.’

Mother avoided bond with newborn when diagnosed with terminal cancer