The evolving bacteria are producing more nutrient-transporting proteins that help it multiply rapidly.

It is also triggering less immune responses, causing fewer symptoms. This allows it to slip under the radar and thrive.

On top of a persistent cough, the bug can trigger deadly seizures, lung infections and brain damage, particularly in children.

Scientists behind the study say new vaccines must be developed in the next five to 10 years to avoid bordetella pertussis morphing into a superbug. 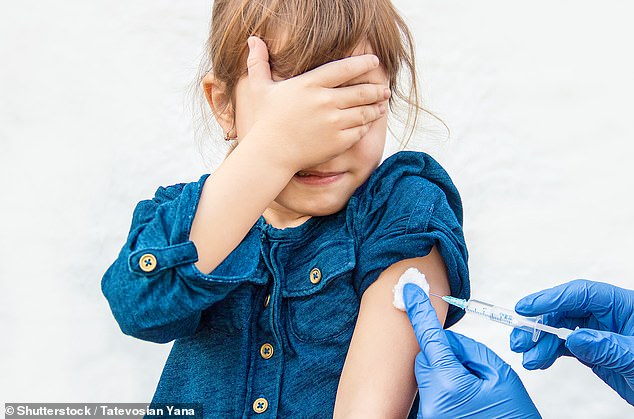 A new whooping cough vaccine is needed as the bacteria evolves into a potential superbug, researchers warn (stock image)

Whooping cough, known for being extremely contagious, kills a handful of children in the UK each year.

It is spread through the coughs and sneezes of an infected person and causes repeated coughing that can last for two to three months or more.

The infection – particularly rife in developing countries – affects around 16million people every year worldwide and causes about 200,000 preventable deaths.

WHAT IS WHOOPING COUGH?

Whooping cough, medically known as pertussis, causes coughing bouts which can last for up several months.

It is spread through sneezes, and the first symptoms are often a runny nose, watery eyes and sore throat.

The infection has its name because between coughs children can make a ‘whoop’ sound when they gasp for breath, the NHS says.

Complications of whooping cough can include breathing difficulties, weight loss, brain damage and even death, in some cases.

Complications of whooping cough can include breathing difficulties, weight loss, brain damage and even death, in some cases

But rates of infection and death from pertussis – its medical name – have plummeted since the 1940s after a vaccine was developed.

Now a team of scientists from University of New South Wales in Sydney have discovered some strains are adapting to the current vaccine used in Australia.

The ACV jab is similar to the one used to immunise against whooping cough in the UK and US.

In their study, researchers analysed proteins that envelop B. pertussis at the cellular level, and compared their activity to results in older studies.

They found the bacteria was encouraging the formation of more nutrient-transporting proteins and less immunogenic ones.

This means they have the potential to scavenge nutrients while avoiding the body’s immune system responses.

Because the evolved bacteria does not trigger strong immune responses, it’s possible the bugs can multiply without causing noticeable symptoms.

This means people may carry the infection without realising. 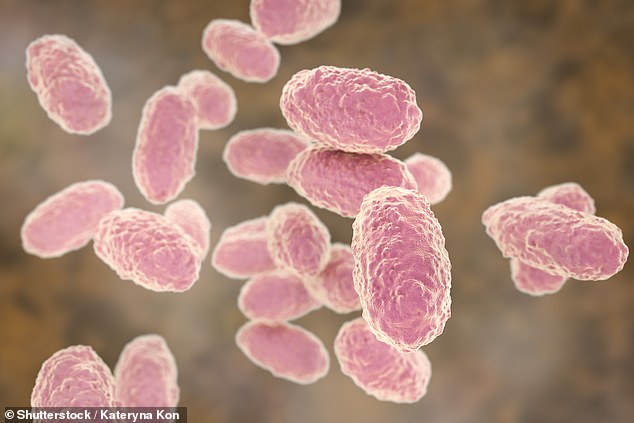 WHY IS WHOOPING COUGH MAKING A COMEBACK?

Government statistics show 1,400 suspected cases of whooping cough have been recorded in England so far this year.

In comparison, just 1,054 cases had been recorded at the same time point last year, according to Public Health England.

More than 100,000 cases of the lung infection were recorded every year in the 1940s before a vaccine was developed.

Experts have blamed waning immunity to the vaccine on the resurgence of the illness common in the 1940s.

The US Center for Disease Control and Prevention (CDC) say pertussis is naturally cyclic in nature, with peaks in disease every three years.

It said peaks have got higher and overall cases counts have jumped over the past few decades because of waning immunity.

‘The bacteria that cause pertussis are also always changing at a genetic level,’ the federal body writes on its website.

IS THE VACCINE TO BLAME?

Some infection experts believe the resurgence can be blamed on the switch of the whooping cough vaccine given to children.

Health officials in the UK switched from the traditional jab to another one in 2004 called DTaP, which protects against diphtheria, tetanus and polio.

A PHE study, published in BMC Medicine, in the wake of the 2012 resurgence found the switch to the new vaccine may be to blame.

In conclusion, the researchers said: ‘Improved pertussis vaccines that provide better protection against infection are needed.’

Many researchers in the US, where the switch to the DTaP jab was made in the 1990s, have echoed the same sentiment in recent years.

DTaP has fewer antigens – proteins that trigger an immune response. This means the jab offers immunity for a shorter time.

The vaccine was developed because of the old one had side effects, including sore arms, crying, fussiness, anxiety, and occasional seizures.

Lead author Professor Laurence Luu, a microbiologist from UNSW, said: ‘We found the whooping cough strains were evolving to improve their survival, regardless of whether a person was vaccinated or not.

‘Put simply, the bacteria that cause whooping cough are becoming better at hiding and better at feeding – they’re morphing into a superbug.

‘The bacteria might still colonise you and survive without causing the disease. You probably wouldn’t know you’ve been infected with the whooping cough bacteria because you don’t get the symptoms.’

Professor Luu said the current vaccine was still ‘very effective’, but warned we need a new vaccine to combat strains as they continue to evolve.

The findings are reported in the medical journal Vaccine.

The NHS offers the vaccine to pregnant women for free, protecting their baby from the infection for the first few weeks of life.

The six-in-one vaccine is given to babies at eight, 12 and 16 weeks, and the four-in-one pre-school booster is offered to three-year-olds.

But the Health Service warns protection obtained from the whooping cough vaccine tends to wear off after a few years.

The warning comes as whooping cough makes a huge resurgence across the UK.

Experts blame the rising number of cases on growing anti-vaccination sentiments and a relatively new jab being less effective than its predecessor.

Whooping cough is spread through sneezes, and the first symptoms are often a runny nose, watery eyes and sore throat.

The infection has its name because between coughs children can make a ‘whoop’ sound when they gasp for breath, the NHS says.

Complications of whooping cough can include breathing difficulties, weight loss, brain damage and even death, in some cases.

The youngest babies – between birth and three months – are at the highest risk of being admitted to intensive care or dying.

Deaths from whooping cough are uncommon, with the Australian Institute of Health and Welfare putting them at about two per year in the two decades leading up to 2018.