Fewer Covid-infected Britons are sticking to the 10-day self-isolation rules than two months ago, an official survey suggests.

The Office for National Statistics found 82 per cent of those questioned who tested positive said they followed the mandatory quarantine in the six days to March 13.

For comparison, the figure in early February — when just 10million Britons had been vaccinated — was 86 per cent.

Experts stressed, however, the results were likely an ‘overestimate’ because they were at odds with other studies, including one paper that claimed fewer than one in five Britons was properly self-isolating.

On the other hand, Test & Trace’s Dido Harding has claimed in the past the numbers underestimate people’s efforts because they are a yes/no question – people who obeyed all the rules for nine days but had to go to a shop once, for example, would fail.

Britain was under its third lockdown in early February, with citizens required to stay home except for to shop for essentials and attend crucial jobs across all four nations.

But by March 13, England had reopened schools for all pupils, while Scotland, Wales and Northern Ireland were allowing primary school children back to the classroom. 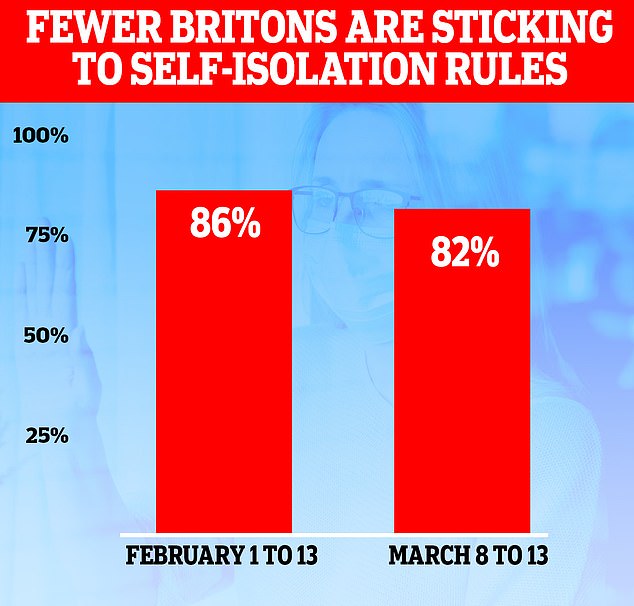 Office for National Statistics found 82 per cent were self-isolating for ten days in early March. For comparison, in February they suggested it was 86 per cent. Experts stressed, however, the results were likely an overestimate 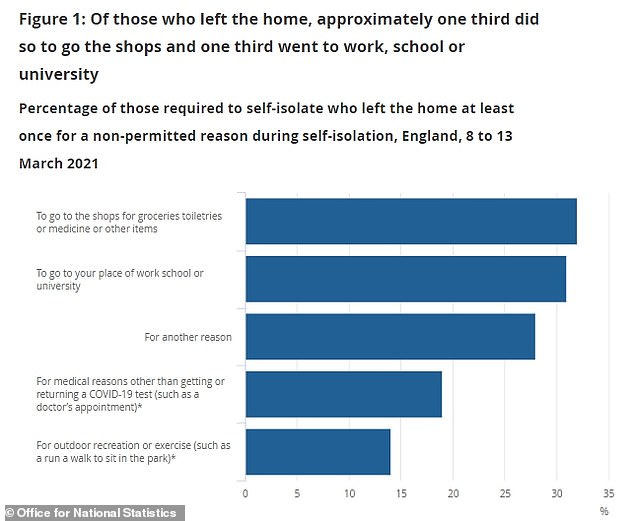 ONS survey found going to the shops, visiting work, school or university or a medical appointment were the most likely reasons for not following the mandatory quarantine 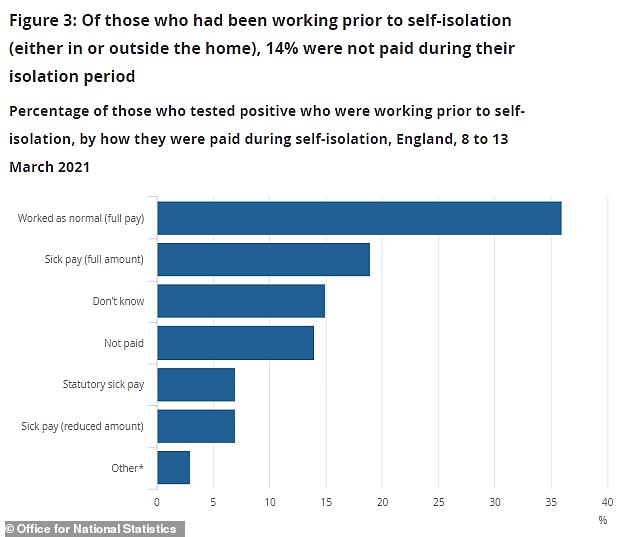 Professor Robert West, a behavioural scientist at University College London, warned there was a ‘high risk’ these results were an overestimate.

‘First, the rate of reported self-isolation is much higher than that found in repeated surveys using a different sampling method,’ he said.

Can you smell your friend’s garlic breath? Then you’re close enough to catch Covid from them, expert says

Britons should use the ‘garlic-breath distance’ measurement to work out whether they are at risk of catching coronavirus, an expert said today.

Dr Julian Tang, a virologist at Leicester University, warned people were standing close enough for the virus to jump between them if they could smell each other’s breath.

‘The way this virus transmits is really through conversational distance, within one metre,’ he told Sky News.

‘When you’re talking to a friend or sharing the same air as you’re listening to your friend talking, we call it the garlic-breath distance.

‘So if you can smell your friend’s lunch you’re inhaling some of that air as well as any virus that’s inhaled with it.’

At the start of the pandemic, experts thought the risk of getting infected was mainly from touching contaminated surfaces such as ATMs and petrol pumps.

But evidence now suggests the SARS-CoV-2 virus is airborne, with infected patients emitting contagious particles when they cough, sneeze, talk or breathe

‘Secondly, the data rely on self-reporting in circumstances where the pressure to report having self-isolated is very high.

‘Thirdly, this is a sample of people who have chosen to get tested, and responded to the survey and are, therefore, likely to be much more compliant than the average person.’

Professor James Rubin, a psychologist at King’s College London, argued the results were ‘good news’, saying the ‘high levels of adherence were encouraging’.

But he warned they should be taken with a pinch of salt because fewer than half of the people the ONS rang to ask to complete the survey actually responded.

‘We need to ask ourselves whether there’s systematic bias at play,’ he said.

‘Perhaps people who don’t adhere to self-isolation also tend to not respond to surveys asking about adherence?’

The ONS survey relied on 1,122 people for its results, with respondents self-reporting whether they had followed isolation rules without providing any evidence.

Statisticians claimed their low response rate (45 per cent) was down to the target population being unwell and, therefore, less able to take part.

They found shopping for groceries, toiletries or medicines (32 per cent) and going to work, school or university (31 per cent) were the most common reasons for not staying at home out of those who failed to stick to the requirements in the latest survey.

This was similar to the previous survey which found shopping for groceries, toiletries and medicine (27 per cent), going to work, school or university (22 per cent) and visiting the doctors (17 per cent) were the most likely reasons.

A third of those who self-isolated said it had a bad impact on their wellbeing and mental health during the period in March.

And 14 per cent reported not being paid by their employer for following the rules.

Moreover, three in ten respondents said they were not sure they understood the self-isolation rules.

The ONS study did not include people who had been asked to self-isolate despite not getting a positive test, such as those returning to the UK from abroad or who had recently been in contact with someone who was infected with the virus.

Previous studies have suggested adherence to the self-isolation rules is very low despite ministers making them a legal requirement.

A King’s College London paper from September found just one in five Britons who had tell-tale Covid symptoms self-isolated. They quizzed 30,000 in the research.

And a British Medical Journal study based on 26,000 participants published last month found less than half of respondents (42 per cent) stayed home for the full ten-day quarantine period.

Experts have suggested many are not self-isolating because of insufficient income support and concerns over struggles with mental health.

They add many housing options – such as small flats in city centres – make the requirement impractical.

Ministers cut the self-isolation period from two weeks to 10 days in December, amid warnings the period was too long and many people were not following the order.

Medical officers said there was sufficient evidence that people weren’t infectious after this time period.

Covid: You’re 10x more at risk of a CVST brain blood clot after coronavirus than vaccine

What Is Soy Lecithin? Potential Benefits vs. Risks