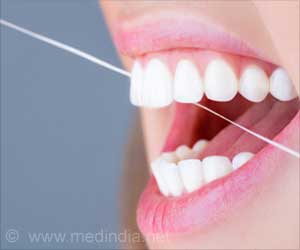 The analysis also showed that each additional missing tooth was associated with a 1.4% increased risk of cognitive impairment. Moreover, adults with tooth loss were more likely to have cognitive decline if they did not have dentures.

“Given the staggering number of people diagnosed with Alzheimer’s disease and dementia each year, and the opportunity to improve oral health across the lifespan, it’s important to gain a deeper understanding of the connection between poor oral health and cognitive decline,” said Bei Wu, a professor in global health at NYU Rory Meyers College of Nursing and the senior study author, in a statement.

Poor oral health causes tooth decay and it eventually results in loss of a tooth. Tooth loss makes it impossible for a person to chew the food properly and extract all the nutrients. No nutrients in the body mean no food for the brain as well, which further leads to cognitive impairment.

The bacteria that cause gum disease can move from the mouth to the brain. Once they reach the brain, the bacteria release substances that can destroy nerve cells, which in turn can lead to memory loss, and compromised cognitive health.

Flossing is a must for good oral hygiene. Dentists across the world recommend it at least once a day to maintain oral hygiene but many people are not aware of this practice.

According to a survey by the American Dental Association (ADA), only 16 percent of adults floss their teeth. In India, the situation is much worse.

Teeth have five sides. While brushing only three of these sides are cleaned. Whereas flossing removes food particles and bacteria present between teeth.

It is a simple oral hygiene measure that helps in preventing tooth decay and gum diseases. Healthy gums in turn prevent the loss of brain cells and even memory.

Flossing can also help to maintain a healthy diet and lifestyle, as flossing after eating will make you less tempted to snack.

It is important to spread awareness about maintaining oral hygiene and including flossing as a part of the daily dental hygiene routine.

Making flossing a part of the daily routine is not enough for oral health but one should know the right way to do flossing.

Most people floss up and down since this seems to be the right way to get food particles out from between teeth. But this will not reach the sides of teeth and the area below the gumline where sticky deposits can accumulate.

Here’s how to do proper flossing:

Considering the benefits of flossing and its impact on brain function, it is important to understand that maintaining good oral health can help in preserving cognitive function.