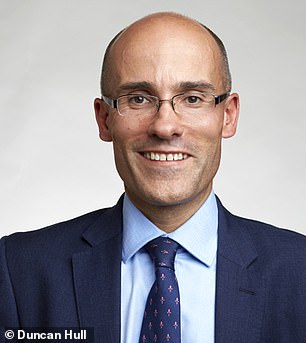 Professor Charles Swanton, who heads the Francis Crick Institute, argued healthcare workers are spreading the disease ‘right in front of our eyes’

Healthcare workers should be screened for coronavirus every week to protect patients from asymptomatic infection, a leading expert has said.

Professor Charles Swanton, who works at the Francis Crick Institute, argued one of the main routes of transmission – in hospitals – is ‘right in front of our eyes’.

Hospitals are believed to be a hotbed of virus transmission, which may be driving new cases across the UK.

It could also be putting people visiting hospital for non-coronavirus reasons, such as for a heart attack, stroke, or cancer treatment, at risk of becoming infected.

But medics may have no idea they are spreading the virus because they don’t show the tell-tale symptoms of a persistent cough or fever.

Evidence is starting to show transmission from asymptomatic patients accounts for between 40 to 80 per cent of COVID-19 cases.

And yesterday, a study from China showed those carrying the killer infection were most contagious to others two days before symptoms appeared.

It comes as it was revealed last night that a pilot is starting this week of home swab test kits that will be delivered by Amazon, starting with key workers. 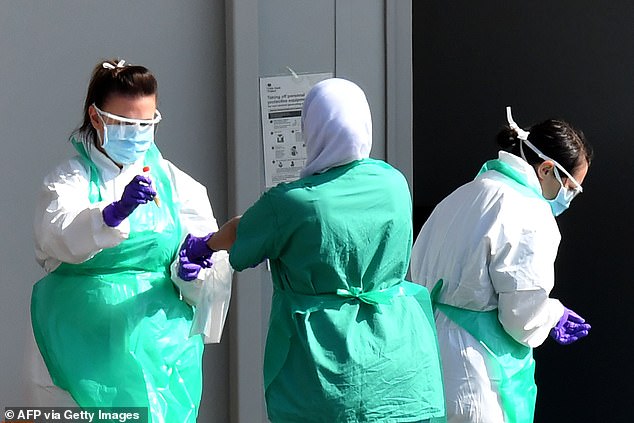 Pictured: Medical staff wear PPE as they prepare to store samples after testing a NHS worker at a drive through at Hopwood Hall College in Rochdale, Greater Manchester

‘For all our fuss about social distancing we’re ignoring one of the main routes of infection in front of our eyes,’ Professor Swanton told The Guardian.

‘It’s almost untenable to argue you shouldn’t be screening and isolating healthcare workers.’

Currently NHS workers can get a swab test if they have symptoms and are referred. Some 23,740 key workers and their family members have been tested so far.

A third (7,900) have come back positive – and that’s only those who are presenting with symptoms.

The Francis Crick Institute is set to trial a screening programme for health workers to see how many are positive but without symptoms.

The pilot study using staff at University College London Hospital will start next week, but the approach has not been explicitly endorsed by the government.

A pilot is starting this week of home test kits that will be delivered by Amazon, as reported by The Times.

The online retail behemoth will send swabs to people’s homes and tell them to take a sample from their throats an hour before they are picked up again.

The results of the test will then be sent by text message. It is understood the pilot scheme will begin with key workers.

This would be a different test to unsuccessful attempt to get a home antibody test, which would show people who have recovered from the virus.

Healthcare and union sources expressed concerns that self-isolating NHS workers are not receiving the invites they need to visit drive-through testing sites.

They told MailOnline that the location of the sites is making it difficult for some staff – especially those who are unwell or who do not have their own transport – to access them.

But it claims to have the capacity to run a screening operation for UCLH on top, with the ability to run 3,000 tests a day.

Professor Swanton, a group leader who heads up the COVID-19 testing facility at the Crick, suggested doing routine swab checks on NHS workers weekly in order to filter out anyone who is carrying the virus.

The government has no data to show how many COVID-19 cases were acquired in hospitals, but experts say this should be made available.

Professor Carl Heneghan, director of the Centre for Evidence-Based Medicine at the University of Oxford, suspects the figure is 20 per cent.

‘There is a message that hospitals are full with COVID-19 patients,’ Professor Robert Dingwall, of Nottingham Trent University, told MailOnline.

The impact is reaching further than expected, as experts say patients with unrelated conditions or emergencies are resisting going into hospital.

Concerns about deaths caused indirectly by the coronavirus were sparked this week, when official figures on deaths in England and Wales were released.

An extra 2,600 people were reported as dying of non-coronavirus causes in the week up to April 3, Office for National Statistics figures show. 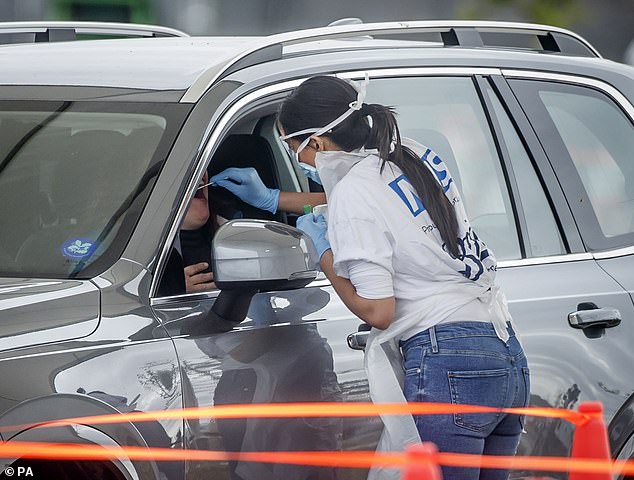 Pictured: Testing being carried out at Leeds Temple Green Park and Ride, part of the drive to increase testing for thousands more NHS workers

The fear of catching the coronavirus at hospital may be leading to more deaths.

Of the excess deaths, COVID-19 was not reported on at least 2,600 certificates, meaning they were from other causes.

Experts said they were ‘disturbed’ by the figures, which they say indicate Britons are struggling to access treatment due to the strain of the pandemic on the NHS.

Tom Dening, professor of dementia research at the University of Nottingham, said people with chronic conditions might be avoiding hospitals because of the virus.

Professor Dening added: ‘Reasons [for the increase in deaths] may include people not feeling able to attend their GP surgeries, call an ambulance or attend A&E.

‘Therefore, some serious conditions may present too late for effective treatment.

‘Another possibility is that some people with serious conditions, like cancer or chronic kidney disease, are either unable or unwilling to attend hospital on the usual regular basis, so their treatment regimes may lapse.

‘Some people confined to their homes are likely to be drinking and smoking more, or eating less healthily, and this may also contribute to health problems, including accidents, around the home.’

People with diabetes or high blood pressure may struggle to manage their condition if GP surgeries are closed, he added.

Appointments have moved to over the phone or video call, but managing unstable conditions is much harder remotely than with face to face attention.

Robert Dingwall, a professor of social sciences at Nottingham Trent University, said the strain of the outbreak on the NHS may be resulting in heart attacks or stroke patients not being treated quickly enough.

He said some deaths may reflect an increase in suicides or stress-related physical disorders as a result of lockdown and unemployment.

But he said it was too early to say this was the case for sure due to how those deaths are investigated.

Professor Dingwall said: People experiencing strokes or heart attacks may be delaying to the point where effective interventions are not possible.’

Other academics said people with chronic or serious conditions, like kidney disease, cancer, or diabetes, might be avoiding hospitals because of the virus.

Graham Cooke, professor of infectious diseases at Imperial College London, agreed that screening should be seriously considered for NHS workers in order to minimise the risks of the virus spreading.

He said: ‘I do think we need to raise the conversation about large-scale testing in healthcare settings.

‘Now we’ve got good evidence that there’s significant transmission in people who are pre-symptomatic.’

Scientists say that it’s asymptomatic people who are the cause of the virus spreading because they don’t realise they have it.

It’s not clear how many people don’t carry symptoms because widespread screening has not been conducted. However there some clues.

For example, among passengers and crew on the quarantined Diamond Princess cruise ship, 46.5 per cent of positive cases were asymptomatic at the time of testing.

Transmission of SARS-CoV-2 by asymptomatic individuals has been clearly documented, a review of literature in the British Medical Journal says.

Mathematical models suggest that 40-80 per cent of transmission events occur from people who are either haven’t shown symptoms yet, or don’t show symptoms at all.

Research published on April 15 estimates around 44 per cent of COVID-19 cases may spread before symptoms appear.

Scientists analysed 77 pairs of people in China to calculate at which point one person had infected the other.

Professor Babak Javid, an infectious disease expert at Cambridge University Hospitals, said the study confirms that ‘for the vast majority of patients, most virus shedding of SARS-CoV2 occurs at, or before symptoms arise’.

He said: ‘Using these data and modelling approaches, they estimate that just under half of transmissions from cases where the most likely source of transmission was known, occurred before the source patient showed symptoms.’

One concern with screening healthcare workers is that it could cause staff absence rates to shoot up.

The NHS is facing one if its most challenging periods in history, which would be exacerbated by the number of staff who need to self isolate.

‘There are reasons to be cautious, but one of them is not to be afraid of what we might find,’ Professor Cooke said.

Frail at forty: Nearly HALF of all adults in their forties are ‘pre-frail’