On average, cancer stopped in its tracks for 13 months for patients on the highest dose of the vitamin supplement (4,000 IU), and for 11 months for those on the over-the-counter dose.

Rates of colorectal cancer have been soaring in recent years, especially among young people who are often misdiagnosed until their disease is already in its late stages.

But the new study, from the Dana-Farber Cancer Institute, suggests that high doses of vitamin D might keep the devastating disease at bay – even in its late stages. 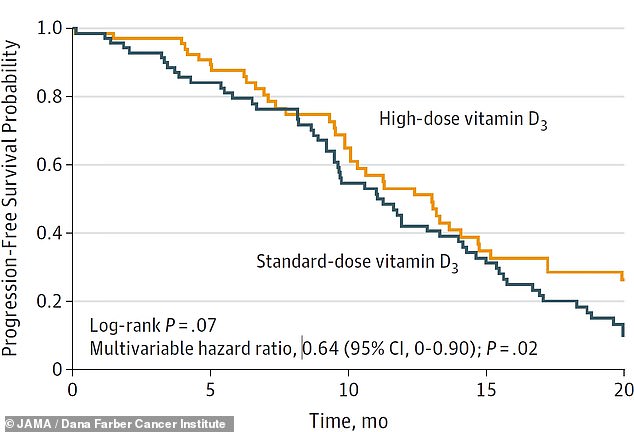 Colorectal cancer was 36 percent less likely to spread and prove fatal for patients who took high doses of vitamin D (4,000 IU or more a day, shown in yellow), a new study found

‘It identifies a cost-effective, safe, and easily accessible agent as a potential new treatment for metastatic colorectal cancer.’

That’s particularly key because studies suggest that as many as 71 percent of under-50s diagnosed with colorectal cancer are already in the third or fourth stage of the disease, when it has spread into nearby tissues or metastasized to further organs.

At these stages, the cancer becomes much more deadly.

While colorectal cancer is isolated its original organs, the five-year survival rate is 90 percent. Once it expands to surrounding areas, like the lymph nodes, that rate drops to 71 percent.

But once it metastasizes, the five-year survival rate plummets to 14 percent.

Targeted therapies and immunotherapies are available to treat colorectal cancer, but only some forms.

For the rest, the standard treatment is chemotherapy.

But the new study, published in JAMA, suggests that adding vitamin D to a treatment regimen could temporarily freeze the disease progression and potentially extend life expectancy.

It isn’t clear why, but those with higher blood levels of vitamin D have lower risks of colorectal cancer to begin with.

And the vitamin seems to activate the suicide switch in cells that can kill them when they become cancerous, according to previous lab studies.

So the Dana Farber Institute researchers enrolled a small number of metastatic colorectal cancer patients – 139 – who had not yet had any treatment.

Both groups saw significant delays in the progress of the disease.

Over the course of the nearly two years of the study, cancer was 36 percent less likely to keep spreading or prove fatal in patients on high doses of vitamin D than it was in those who took the lower dose.

Vitamin D is looking very promising, but to the authors’ knowledge, this is the first time its benefits for colorectal cancer have been studied – and it’s still early days.

‘The results of our trial suggest an improved outcome for patients who received vitamin D supplementation, and we look forward to launching a larger trial to confirm these exciting and provocative findings,’ said senior study author Dr Charles Fuchs, a former Dana-Farber oncologist who is now at Yale University.

Perhaps best of all, vitamin D is a cheap complementary treatment. A bottle of 300 1,000 IU capsules costs about $15.

‘This could therefore potentially have a large and wide-reaching impact globally, regardless of a patient’s socioeconomic status or a country’s resources,’ said Dr Ng.

Tylenol may make you less empathetic to others’ happiness