Hundreds more Delta Airlines workers are suing Lands’ End, claiming uniforms are making them feel sick and causing them to break out in rashes, according to a class action suit filed in Wisconsin on Tuesday.

A group of flight attendants first filed a class action suit on the same grounds in May, but it was later narrowed to include only plaintiffs based in New York.

The class action filed on Tuesday includes complaints from 525 Delta workers from across the US.

They say that the ‘Passport Plum’ uniforms the airline introduced in 2016 and required since 2018 are covered in additives that may keep them from staining and stinking but trigger a ‘myriad of health problems.’

Flight attendants, ticketing agents and other Delta employees claim Lands’ Ends’ clothing is making it difficult for them to breath, blurring their vision, irritating their sinuses and causing everything from rashes to hair loss and blisters. 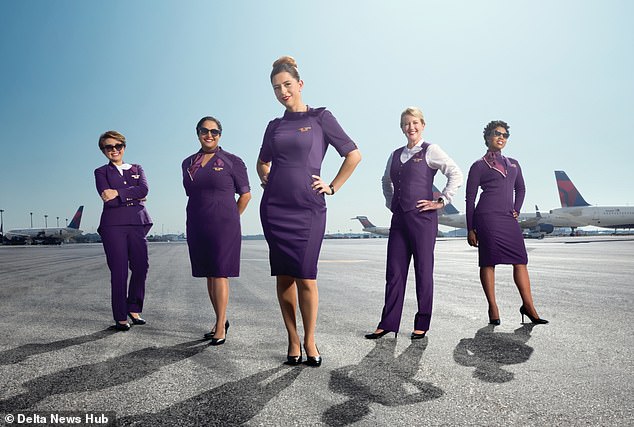 Another 525 Delta employees have filed a class action lawsuit against Lands’ End, claiming the company’s ‘Passport Plum’ uniforms have been making them sick for years (file)

It’s unclear what monetary amount the plaintiffs are seeking, but the suit asks that the court make Lands’ end pay for their medical expenses, recall the uniforms and pay for a health monitoring program for anyone who’s worn the offending uniforms.

One flight attendant claims that her uniform has left her with not only skin problems, but asthma, heart palpitations and autoimmune conditions.

Another blames her work outfit for the blood in her urine, hives and vocal cord problems.

Yet another says she’s been left with muscle cramps from the uniform, and most of the named plaintiffs complain of skin and sinus irritation.

‘The uniforms pose an ongoing, unreasonable risks of physical harm to the Class, including threatening the Class members with future serious health problems because of an allergic and/or sensitization response,’ the class action charges.

‘The unreasonable risks to the Class can be ameliorated or prevented through a robust monitoring program.’

Delta employees complained over and over again to the National Institute of Occupational Safety and Health (NIOSH), and the organization finally conducted testing on the uniforms.

Testing revealed a number of potentially risky chemicals and heavy metals in the uniforms.

‘It is possible that textile chemicals in the uniforms or the physical irritant properties of the uniform fabrics have caused skin symptoms among Delta employees.’

Delta employees are not the first airline workers to allege that their uniforms are harmful or toxic.

Flight attendants, pilots and other workers from American Airlines and Alaska Airlines have filed similar suits in recent years.

Both groups charged that the chemicals Twin Hill used to make their uniforms had caused them health problems.

Alaska’s suit, filed in 2012, failed, but the uniforms in question were ultimately recalled in 2014, according to CBS.

It’s not clear what came of American Airlines’ suit.

Lands’ End had not responded to DailyMail.com’s request for comment at the time of publication.