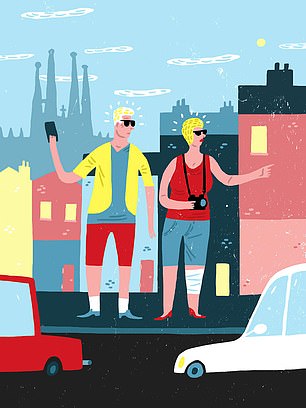 Chris and I are on holiday – we’ve come to see an old friend Patricia, who lives here in Barcelona

I am writing this column from my hotel room in Barcelona, sporting a large plaster on my left knee. Chris and I are on holiday – we’ve come to see an old friend Patricia, who lives here. The weather is lovely, and sightseeing has been fabulous: the Picasso museum and the big cathedral, the Sagrada Familia were both awesome.

But, while crossing a road I tripped over the kerb and, bang, there I was on the ground. I’d just like to say, Your Honour, that I was completely sober.

I’ve read that dementia can cause problems with balance and co-ordination, but I don’t think my fall was a sign of anything sinister. It was one of those things. The kerb just sort of came out of nowhere.

It was a shock. Falling over isn’t something you do very often as a grown up – which makes me all the more impressed, in hindsight, with Madonna for being pulled backwards down the stairs on stage at the Brit Awards a few years back when her dress got snared, then getting up and keeping on dancing. I think I probably blubbed something like: ‘I want to go home…’

So Chris dusted me off and took me back to the hotel, and then popped out to get a plaster. Going out to dinner cheered us up.

I’m fine now; I’m quite tough. But sadly my trousers weren’t. There’s a hole in the knee, so I suppose I’ll need a new pair.

As readers of this column may recall, one of my favourite things is to browse in TK Maxx.

I’m actually trying to stop myself at the moment.

Last time I went out to buy dog food, I ended up going into TK Maxx and coming home with a jacket. I blame The A Word, of course.

Anyway, the holiday is great fun – but I have to admit, I keep getting a bit confused about where we are.

Memories of different holidays I’ve had come flooding back, and we’ll be walking down a street when I’ll tell Chris: ‘We’ve come here before.’ At one point, I thought we were in Nice. Another time, it was Palma. But it doesn’t bother me that I get a bit baffled because I love getting out and going places.

Last week, I watched the amazing BBC documentary My Dementia Choir. In it, Line Of Duty actress Vicky McClure got a bunch of people with dementia to sing together. It was a real tear-jerker, and I enjoyed it so much I’m pretty sure I’ll be watching it again (and again). 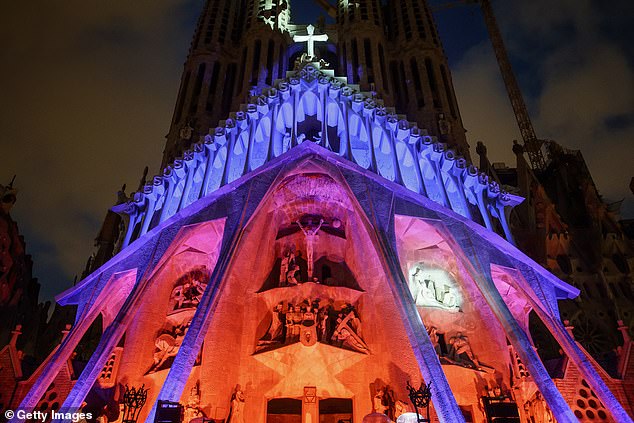 The weather is lovely, and sightseeing has been fabulous: the Picasso museum and the big cathedral, the Sagrada Familia, pictured, were both awesome

McClure – whose grandmother Iris had dementia and died in 2015 – also spoke to scientists studying how music can re-awaken areas of the brain in dementia patients, causing a physical and emotional response.

Music has always been massively important to me, but even more so now. I find myself listening to the same songs over and over. At the moment, the sun is streaming in the window, and I’ve got Billy Idol’s White Wedding blaring on repeat.

In the documentary, one of the men in the choir said something that echoed my thoughts exactly: I can have a thought, but in a nanosecond that thought has disappeared.

When we listen to music, memories feel more solid. Like they’re sticking, instead of flying by. Another woman in the choir said she keeps forgetting she has dementia. I do too, especially when I’m listening to music I love.

Email [email protected] or write to her at The Mail on Sunday, 2 Derry Street, London W8 5TT.

When I go for a jog with Benny, my dog, or I go to Zumba – which combines exercise and music – Chris says I come back ‘sharper’ and more with it. So using my senses is clearly good for my brain. Apparently, I keep asking him when we’re going to visit Patricia. He got so irritated, he wrote in the notebook I carry with me everywhere: ‘We are seeing Patricia on f*****g Friday.’ Unfortunately, I then forget he’s written it and ask again.

Maybe I need to play White Wedding again, and have a dance – it might do my memory some good. Or it might just be a great way to spend the next few minutes of my holiday.