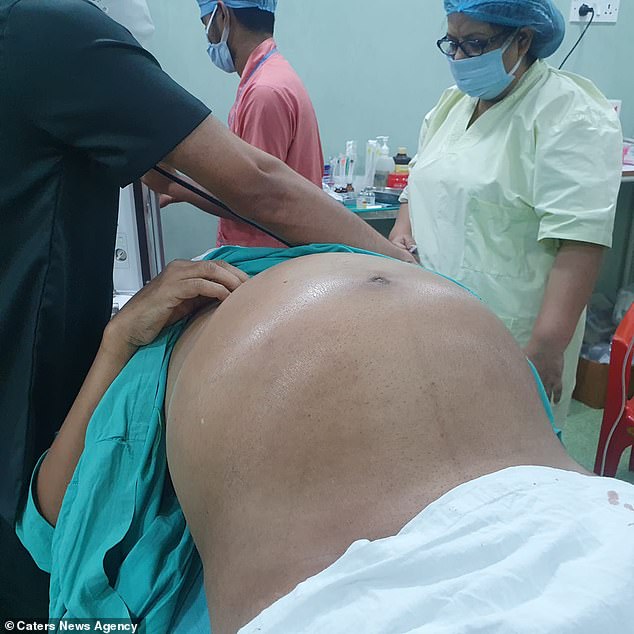 An Indian musician had a 22lb cancerous tumour removed from his stomach after doctors warned the growth could have killed him.

But local doctors failed to detect the 45-year-old’s tumour when he first went for a check-up in August.

His stomach later quadrupled in size and medics discovered the retroperitoneum sarcoma — a cancer in the connective tissue deep in the abdomen, behind the kidneys.

The massive tumour was pressed against his major organs and could have killed him if it was not removed, surgeons claimed.

Arnab Mukherjee, 45, from Kolkata, had a 22lb cancerous tumour cut out of his stomach after doctors warned the growth could have killed him

WHAT WAS THE WORLD’S LARGEST TUMOUR?

Doctors removed the world’s largest ever tumour from a woman in Stanford, California, in 1991.

It developed on her right ovary and was a multicystic mass.

She weighed 210lb (95kg) after the surgery and left the operating theatre in a stretcher.

He said: ‘It was a very critical and rare case.

‘The patient had life risk because tumor was so big in size.’

Mr Mukherjee is now being given cancer treatment to cure the remaining cancerous tissue and prevent the tumour returning.

Dr Makhan said: ‘The patient is stable and is having liquid food every two to three days.

‘It took almost four hours to remove it. It was a life-saving surgery.

‘We successfully removed the tumour and no other organ was damaged or removed.

‘As the tumour was malignant he will now go through chemo[therapy] and other cancer related medication.’

Sarcomas are a rare type of cancer that develop in the connective tissues, including muscle, bone, nerves, cartilage, tendons, blood vessels and the fatty and fibrous tissues.

Mr Mukherjee’s tumour was growing on his retroperitoneum, which is based in the area where major blood vessels, the kidneys, pancreas and bladder are located.

Retroperitoneal sarcomas often cause the abdomen to increase in size, although not usually to the extent of Mr Mukerjee’s.

Surgery is usually the main treatment for the cancer, which can involve taking part of the surrounding organs.

Around 15 per cent of all soft tissue sarcomas are found in the retroperitoneum, data suggests.

Around 3,000 patients are diagnosed with soft tissue sarcomas every year in Britain, while the figure is thought to be three times higher in the US.

High cholesterol: The simple cooking mistake that could be causing your...