Iron Deficiency Linked To A Higher Risk Of Cardiovascular Disease 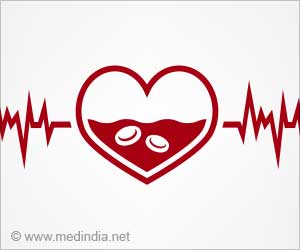 Healthy amounts of red blood cells are necessary for the supply of oxygen to all the body tissues. Iron is one of the

and is thereby required for hemoglobin production in the RBCs. Iron deficiency

like hospitalizations and death. Moreover, a FAIR-HF trial2 showed that the functional capacity, symptoms, and quality of life were improved in heart failure patients with intravenous treatment of iron.

This allowed further exploration of the FAIR-HF 2 trial in exploring the effect of intravenous iron supplementation on the mortality rates of heart failure. The present study thus examined the link between iron deficiency and outcomes in the general population.
Advertisement

“This was an observational study and we cannot conclude that iron deficiency causes heart disease. However, evidence is growing that there is a link and these findings provide the basis for further research to confirm the results,” says study author Dr. Benedikt Schrage of the University Heart and Vasculature Centre Hamburg, Germany.

The study team incorporated three European population-based cohorts with 12,164 participants (55% were women) with a median age of 59 years.

The blood samples were clinically used to assess the comorbidities like diabetes, obesity smoking, cholesterol, and other cardiovascular risk factors during the baseline study visit. The classification of the participants was done based on their presence or absence of iron deficiency as per the following definitions:

“Absolute iron deficiency is the traditional way of assessing iron status but it misses circulating iron. The functional definition is more accurate as it includes both measures and picks up those with sufficient stores but not enough in circulation for the body to work properly”, says Dr. Schrage.

The incidence and mortality rate of cardiovascular diseases like coronary heart disease, stroke, and other causes were observed during the follow-up of participants.

The correlation of CAD and iron deficiency was done with different age groups, body mass index, sex, diabetes, cholesterol, smoking, blood pressure, and inflammation. Among the baseline, almost 64% had functional iron deficiency and 60% of participants had absolute iron deficiency.

The team also calculated the estimates of the event proportion in 10 years. It was found that 11.7% of cardiovascular deaths, 5.4% of all deaths, and 10.7% of new coronary heart disease diagnoses were confined to functional iron deficiency within 10 years.

The study data thereby suggests that the absence of baseline iron deficiency may prevent almost 12% of cardiovascular deaths, 5% of overall deaths, and 11% of new coronary heart disease diagnoses in the succeeding decade.

Moreover, the high prevalence of functional iron deficiency was almost two-third in the middle-aged population and the next 13 years; these individuals were likely to develop heart disease.

Facts on Heart attack and Stroke