KFC has suspended its latest UK campaign after receiving a backlash across social media.

The American fast food chain which has over 23,000 outlets across 140 countries, collaborated with the advertising agency Mother London for a new promotion of its ‘Finger lickin’ good’ slogan.

Debuted in late February, the campaign showed people licking their hands and sucking their fingers after enjoying KFC chicken.

Many people took to social media blasting the adverts as ‘irresponsible’ at a time when there is a total of 1,421 people in the UK suffering with COVID-19. 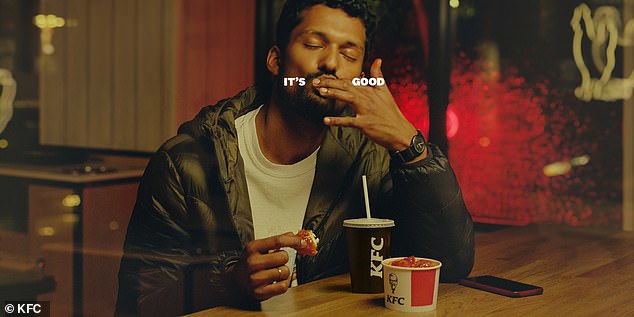 KFC have temporarily withdrawn their latest ‘finger lickin’ good’ campaign (pictured) across the UK, amid the coronavirus pandemic

According to the Advertising Standards Authority, KFC made a decision to withdraw the campaign before the complaints arose.

A spokesperson told Mail Online: ‘We have been in touch with KFC, who had already taken the decision to withdraw the ad before we had informed them of the complaints. On that basis, we won’t be taking any further action on this occasion.’

‘It doesn’t feel like the right time to be airing this campaign, so we’ve decided to pause it for now – but we’re really proud of it and look forward to bringing it back at a later date,’ added a KFC representative.

A stream of people took to Twitter voicing their concerns over the campaign, which has been temporarily withdrawn as people are urged to pay increased attention to hygiene.

One person said: ‘I just don’t think KFC should be encouraging finger licking in a time like this. #Covid19’

Another wrote: ‘Hi KFC, you should consider pulling your ads which show people licking their fingers as per this one on the TFL tube. It’s NOT good to lick fingers during the Coronavirus pandemic’

According to the ASA, KFC made a decision to suspend the promotional material (pictured) before people began complaining on social media

Others blasted those who complained about the campaign, as many said they would continue to lick their fingers after eating KFC.

‘It’ll be a cold day in hell before I stop licking my fingers after a delicious piece of KFC chicken,’ wrote one.

Another said: ‘I just saw viewers of the KFC finger licking good as saying it’s irresponsible during the coronavirus outbreak. The people complaining about this ad would probably  lick a fence post after watching Christmas Story. Get a grip people’

A third added: ‘WOAH NOW CORONA IS GETTING IN THE WAY OF ME LICKING KFC SPICE OFF MY FINGERS?!!!! nah this corona b**** and I need to have a chat’

Coronavirus symptoms: Does your skin look like this? Warning symptom not to be ignored

As the pandemic drags on, when can we get back to work?