Less than 0.01% of Americans fully vaccinated against COVID-19 have gone on to contract the disease

A small number of Americans who have been fully vaccinated against COVID-19 later contracted the disease, according to the Centers for Disease Control and Prevention (CDC).

These-so-called ‘breakthrough cases’ occur when people test positive for the virus at least 14 days after receiving their final dose of the vaccine, and which officials say is not surprising.

‘So far, about 5,800 breakthrough cases have been reported to CDC,’ the federal health agency wrote to CNN in an email.

‘To date, no unexpected patterns have been identified in case demographics or vaccine characteristics.’

With more than 76.6 million Americans – 23.1 percent of the population – fully immunized against coronavirus, this means that just 0.007 percent later fell ill – far less than one percent.

Additionally, more than 123.9 million Americans – or 37.3 percent – have received at least one dose with an average of 3.3 million shots in arms per day.

The data are the first numbers to show how well the vaccine works in real life and – although the shots are not 100 percent foolproof – it suggests that developing the virus after being fully vaccinated is very rare. 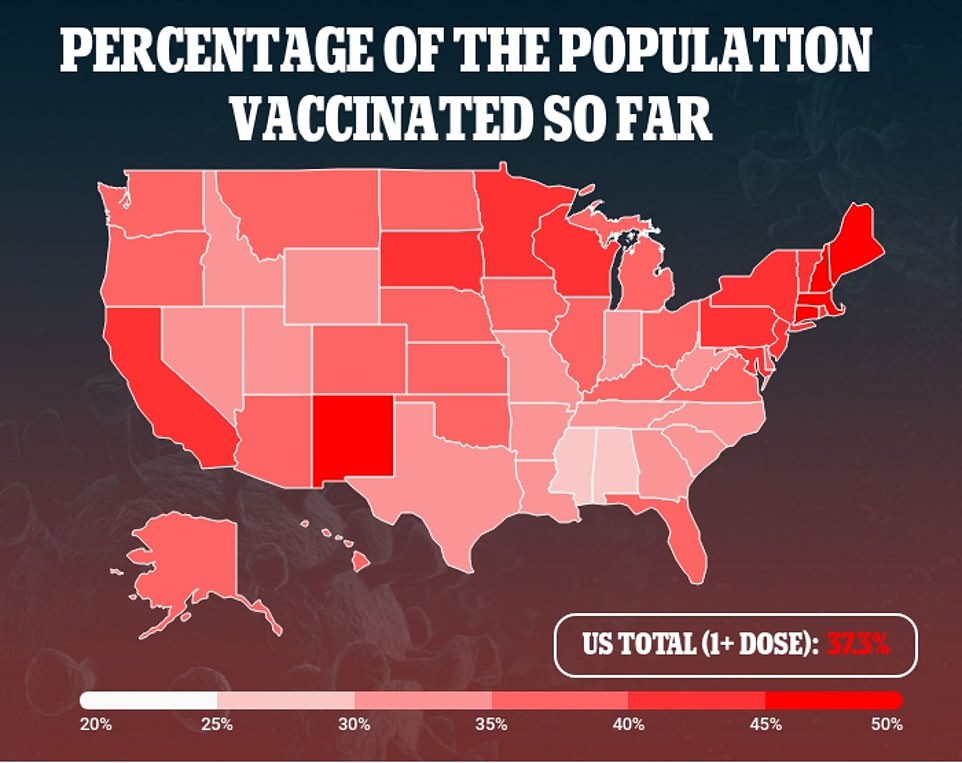 The CDC reports that about 5,800 of 76.6 million Americans fully vaccinated against COVID-19 – 0.007% – later tested positive for the virus,  with addition 123.9 million Americanas receiving at least one dose 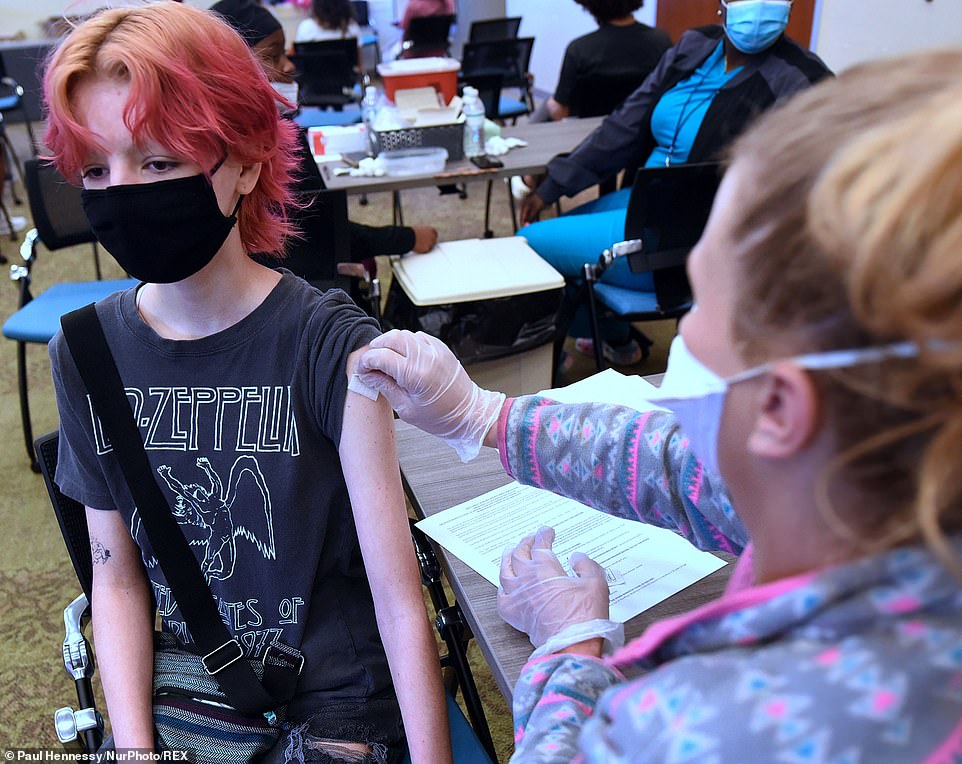 Of those 5,800 cases, most were older and female, with 7% of them- or 396 people – later hospitalized and 74 of them dying of the virus. Pictured: A nurse prepares to give Skyler Penney a shot of the Pfizer COVID-19 vaccine in Clermont, Florida, April 14

Experts have warned that breakthrough case will continue to occur as  tens of millions of people are vaccinated across the country.

In addition, Johnson & Johnson’s vaccine trials showed 72 percent efficacy in the US, meaning those who got the one-shot jab were 72 percent less likely to contract the disease.

By comparison, flu shots are less effective with about 40 to 60 percent efficacy, meaning that people vaccinated against the flu are more likely to get the seasonal virus than people fully vaccinated against COVID-19 are to contract the coronavirus.

According to the CDC, about 40 percent of the breakthrough infections occurred among people who are aged 60 and older.

The agency also told CNN that 65 percent were among females and 29 percent had no symptoms.

Health officials also plan to test samples from people with breakthrough cases to see if any of the patients were infected with variants.

The news comes as the pause of the J&J vaccine continues. 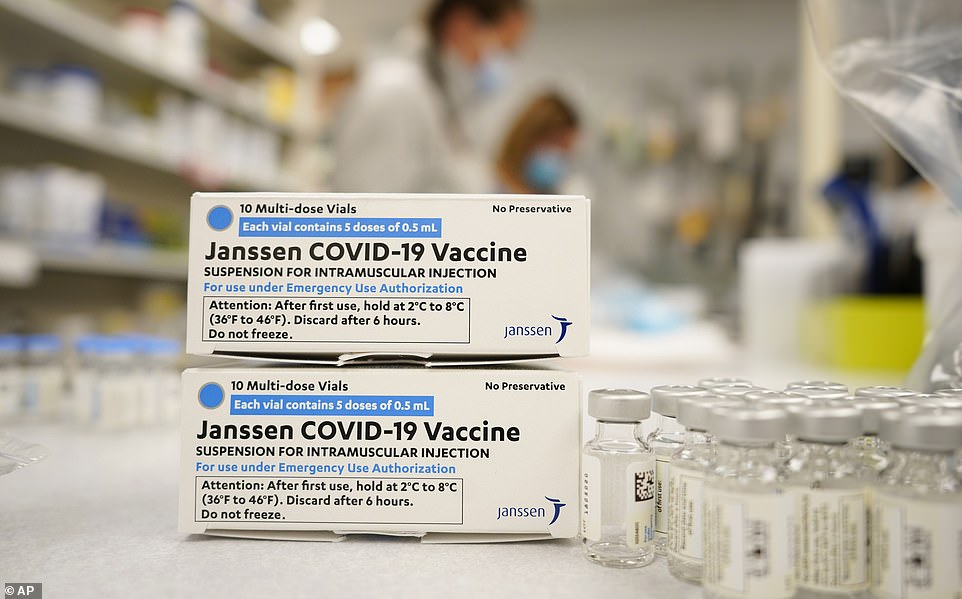 It comes amid the pause of the Johnson & Johnson vaccinated after there were nine reports of rare, but serious, blood clots out of 7.2 million vaccinations. Pictured: Boxes and vials of the J&J COVID-19 vaccine at National Jewish Hospital in Denver, March 6 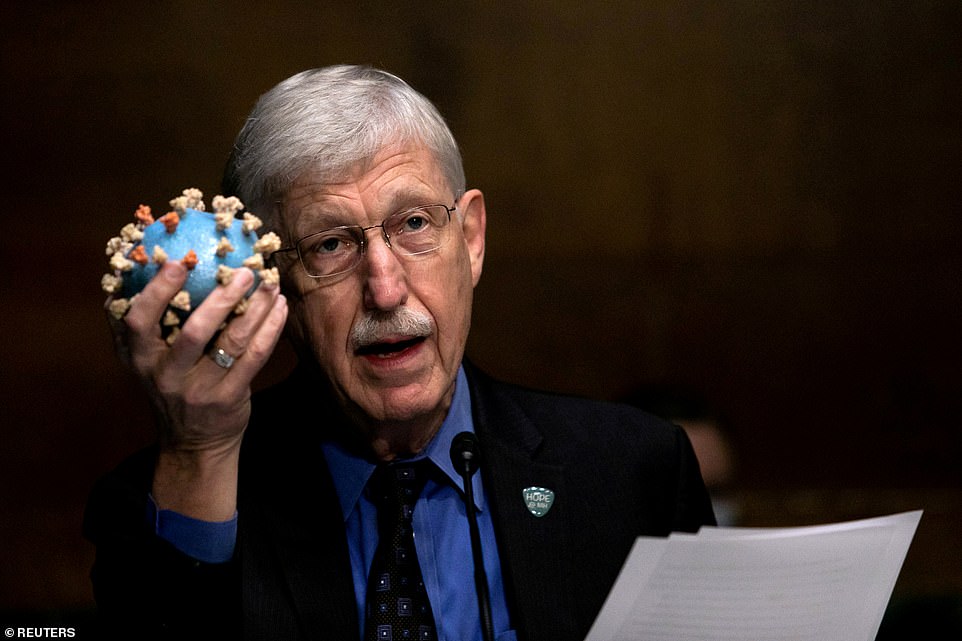 NIH director Dr Francis Collins told CNN the pause allow more time for scientists to investigate links between the shot and blood clots and that he doesn’t believe the pause will slow down the mass vaccination campaign. Pictured: Collins holds a model of the novel coronavirus, as he testifies on Capitol Hill, July 2020

The CDC and the U.S. Food and Drug Administration (FDA) suggested clinicians stop using the shot after six reports  – later updated to nine – of rare, but serious, blood clots out of 7.2 million vaccinations.

Members of the CDC’s Advisory Committee on Immunization Practices (ACIP) delayed a vote on Wednesday on whether or not to recommend lifting the pause because many said they wanted more data before proceeding with a decision.

National Institutes of Health Director Dr Francis Collins told CNN will allow more time for scientists to investigate links between the vaccine and blood clots and whether or not certain groups of people are more susceptible.

Collins said he does not believe the pause will slow down the U.S. mass vaccination campaign.

‘In fact, the J&J vaccine supply was the smallest of the three and was not going to be particularly critical to get us to the point where everybody would have vaccine access by the end of May, or certainly by June,’ Collins said.

This is despite Jeff Zients, the White House COVID-19 Response Coordinator, noting during a press conference on Wednesday that there will be an impact on daily averages ‘in the very short term…as sites and appointments transition from Johnson & Johnson to Moderna and Pfizer vaccines.’

What’s more, Surgeon General Dr Vivek Murthy told CNN that Americans shouldn’t be worried about the pause because it shows that the U.S. vaccine safety system is working the way it was intended to.

‘Our confidence in these vaccines is still high…We want to just make sure the investigations are done completely,’ he said. 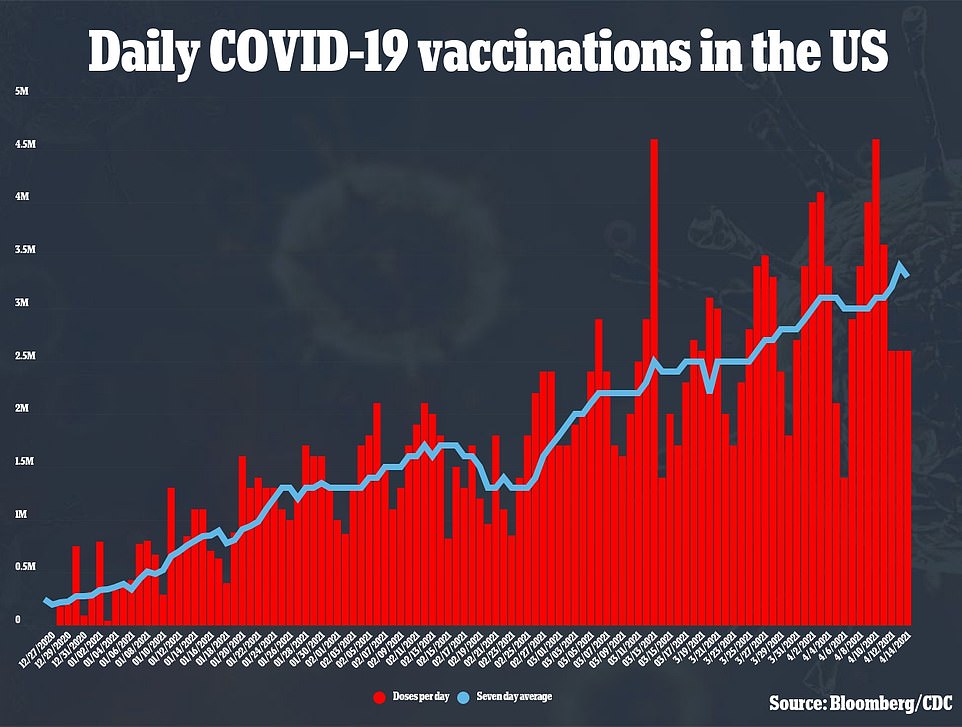 An average of more than three million people are being vaccinated every day in the U.S. (above), but some states are doing better at immunizing residents than others

Percentages indicate share of residents who have received at least one dose.

However, vaccine hesitancy is still apparent in some parts of the U.S. and state that are excelling and struggling with vaccinations are starting to look like the nation’s political map: deeply divided between red and blue states.

Currently, New Hampshire is doing the best when it comes to the percentage of residents who have received a least one dose with 53.3 percent doing so, according to CDC and Bloomberg data.

Rounding out the top five are Maine, New Mexico, Connecticut and Massachusetts, which all have given at least an initial shot to more than 44 percent of their adult populations.

All have a history of voting Democratic and supported President Joe Biden in the 2020 election.

In the bottom are five states where fewer than 31 percent have rolled up their sleeves for a shot. The wort is Mississippi with just 28.1 percent of adults in the state receiving at least one dose.

The fifth is Georgia, which has a Republican governor and supported GOP presidential candidates for nearly three decades before narrowly backing Biden. 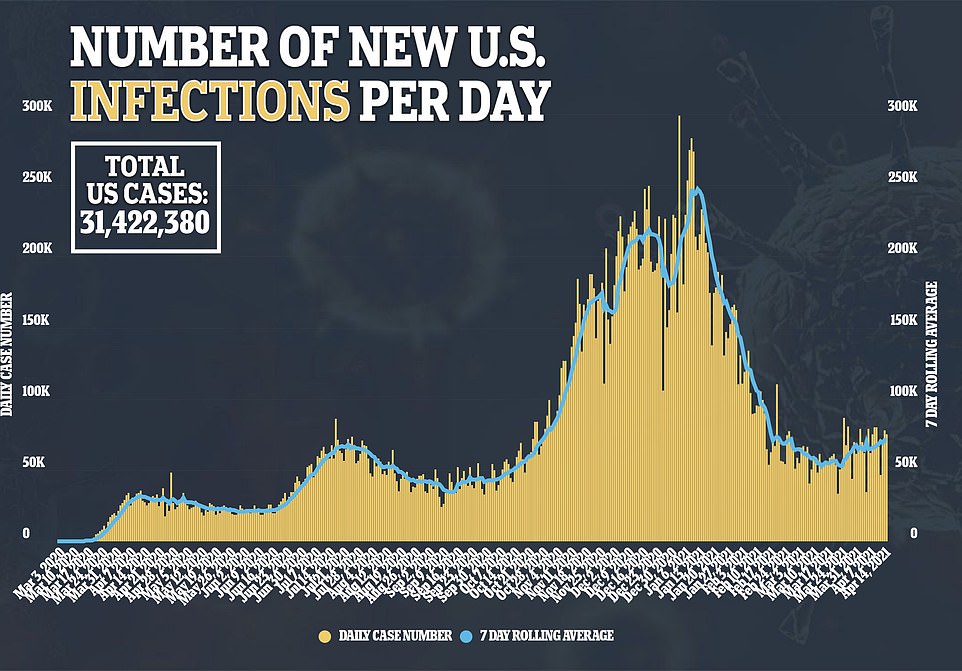 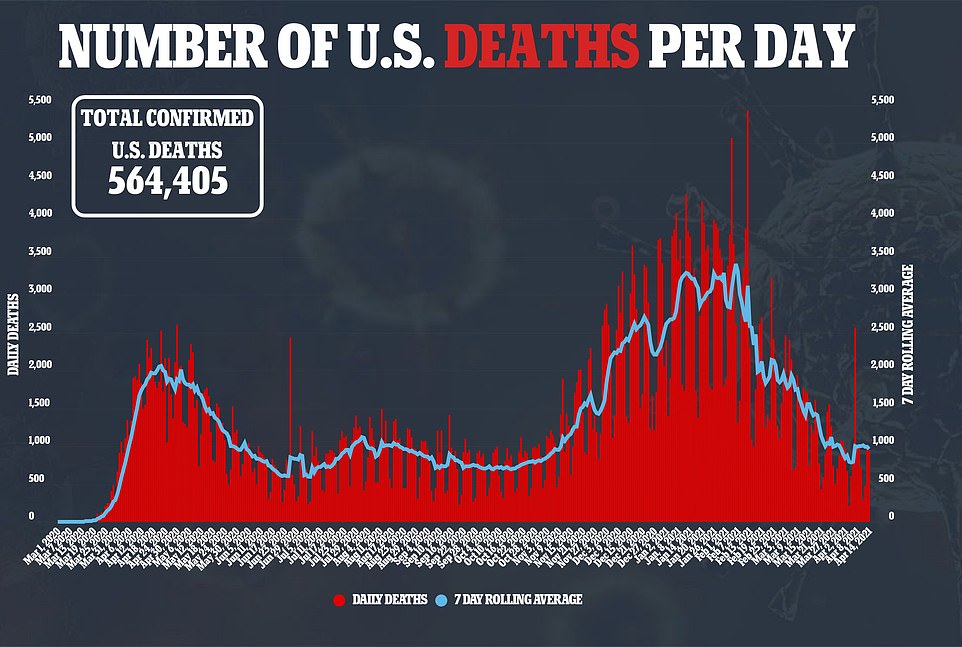 The emerging pattern: Americans in blue states that lean Democratic appear to be getting vaccinated at more robust rates, while those in red Republican states seem to be more hesitant.

‘We can draw a conclusion that red states and voters that voted for Trump are going to be more difficult to vaccinate because we have real good survey data to support that,’ Dr Howard Forman, a professor of public health and management at the Yale School of Medicine, told the Associated Press.

Forman cautioned that in most U.S. states, which receive vaccine shipments based on population, demand for the shot still exceeds supply, so it’s hard to know how many people are resisting until everyone who wants the shots gets them.

But if states soon start seeing significant numbers of unfilled appointments with many people still unvaccinated, he said consequences could be serious.

On Wednesday, Dr William Schaffner, a professor of preventive medicine and infectious diseases at the Vanderbilt University Medical Center, told DailyMail.com he is already seeing in his state of Tennessee the effects of vaccine hesitancy – only 30.4 percent of the population has received at least one shot – and encourages everyone to get the vaccine when it becomes available to them.

‘The way we can all protect ourselves, our families and our neighbors is to all get vaccinated just as quickly as possible.’ 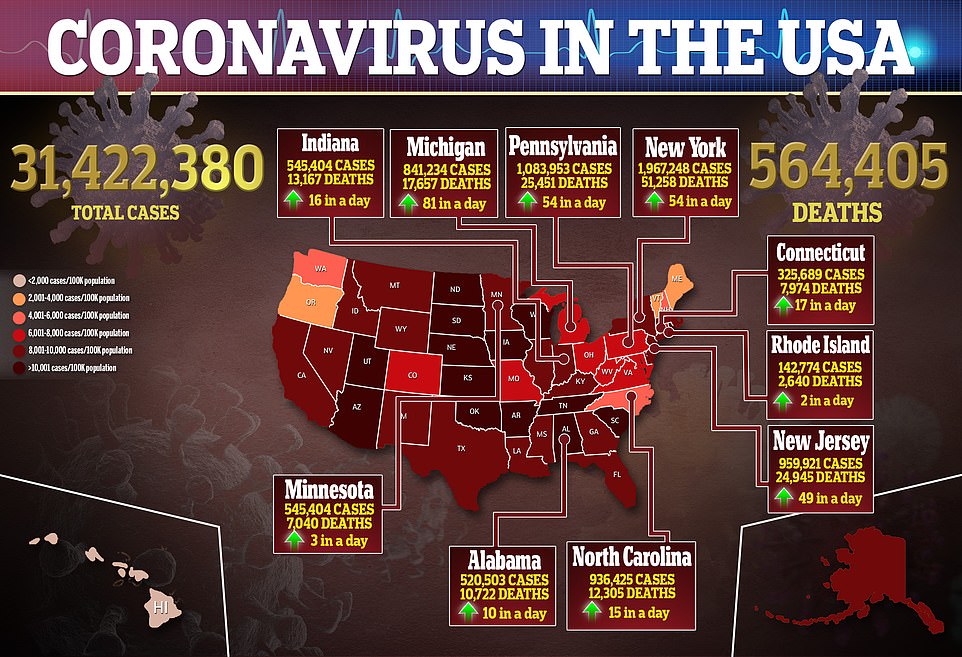