A man who was diagnosed with Parkinson’s at the age of 31 has revealed people – including nurses – often mistake his slurred speech for being drunk.

Ryan Cameron, 36, of Bedfordshire, was told he had Parkinson’s after doctors ran tests to work out why his movements had become slower.

Mr Cameron spiralled into depression as he tried to come to terms with the shocking diagnosis, which also forced him to leave his job as a PE teacher.

Only a handful of patients develop Parkinson’s, which causes symptoms including tremors and shakiness, before they turn 50.

Strangers have called him a ‘grumpy git’ – because he has less facial expressions – assumed he is old, or asked why he is using a disabled parking bay.

Mr Cameron told his story after a survey today revealed 87 per cent of people with Parkinson’s disease have faced similar judgement or discrimination. 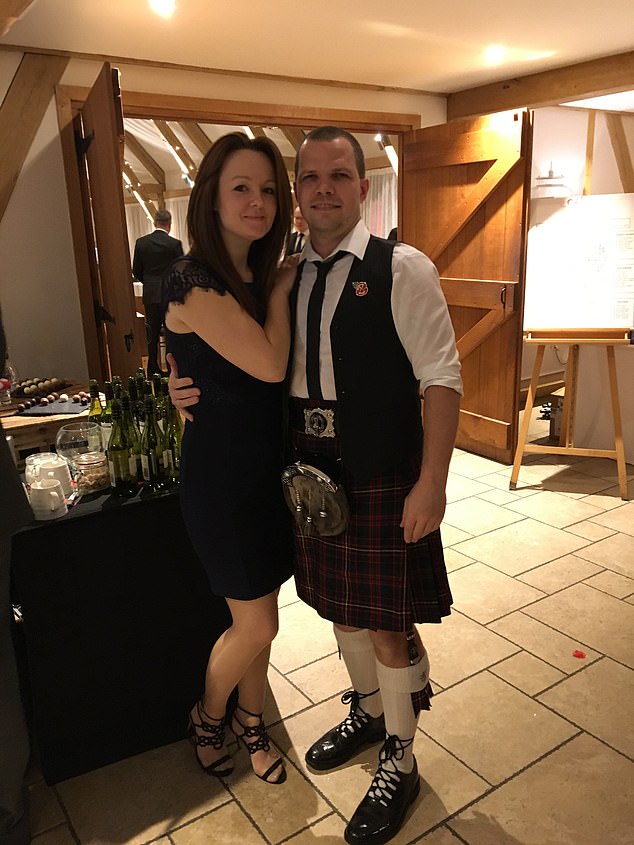 Ryan Cameron, 36, who was diagnosed with Parkinson’s at the age of 31, has revealed he has wrongly been believed to be drunk – even by nurses. Pictured with his fiancée Kelly Lara, 28 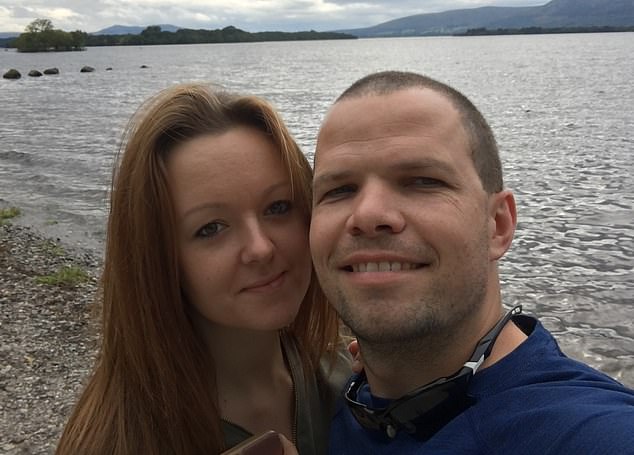 The former PE teacher spiralled into depression as he tried to come to terms with the shocking diagnosis in October 2014. Pictured with Miss Lara

One in five people with Parkinson’s has faced accusations of being drunk because of their symptoms, the survey by Parkinson’s UK found.

Mr Cameron, who is engaged to Kelly Lara, 28, who he met in 2017, before he had to retire from teaching, said: ‘There is so much misunderstanding.

‘People just don’t realise how serious Parkinson’s is. I get told I’m “too young” and that “it’s an old person’s condition”.

‘I’ve had a nurse in hospital mistake my jerky movements for being drunk when I went to A&E with pain in my stomach, even after I told her I have Parkinson’s.

‘I have problems expressing my emotions through my facial expressions – a common symptom – and people just refer to me as a “grumpy git”.

‘On my good days when my symptoms are manageable, people often tell me I “don’t look ill”, which can be frustrating.’

In September 2013, Mr Cameron, who was fit and healthy, had just started a new job as a PE teacher at a special needs school.

WHAT IS YOUNG ONSET PARKINSON’S DISEASE?

In the US, around two to 10 per cent of sufferers are under 50, while just 1.2 per cent are in the UK. Parkinson’s is usually diagnosed in those over 60.

Parkinson’s in general affects one in 500 people, and around 127,000 people in the UK live with the condition.

It is a progressive neurological condition which destroys cells in the part of the brain that controls movement.

Sufferers are known to have diminished supplies of dopamine because nerve cells which make it die.

There is currently no cure and no way of stopping the progression of the disease, but hundreds of scientific trials are underway to try and change that.

He was struggling with the increased typing needed for the job, finding that his right hand fingers would stay on certain letters on the keypad longer than he intended.

Mr Cameron had also been experiencing pain in his shoulder and his right arm and leg were moving slower than he expected.

‘I was finding it hard to get going in the mornings and my movements were slow,’ Mr Cameron said.

He went to his GP in April 2014 and was referred to the neurology department at the Luton and Dunstable Hospital in June to see a consultant.

Mr Cameron said: ‘Parkinson’s didn’t even cross my mind. I was sure it was a trapped nerve.

‘I was sent for tests in August and things like motor neurone disease and MS were talked about.

‘When I was diagnosed with young onset Parkinson’s in October 2014, I fell apart. I’ve always been a happy-go-lucky person, but that diagnosis was really tough.’

Parkinson’s disease is a degenerative neurological condition which can develop at any age, causing symptoms including involuntary shaking, slow movement and stiff or inflexible muscles.

An estimated 145,000 people were diagnosed with the condition in the UK in 2018, with men being slightly more likely to get it than women.

Young onset Parkinson’s disease (YOPD) occurs in people younger than 50 years of age, with around one in 20 people with the condition first experiencing symptoms when they’re under 40. 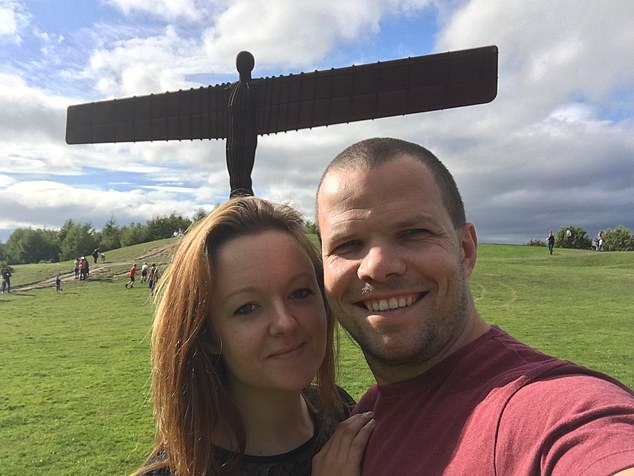 Mr Cameron said strangers have called him a ‘grumpy git’ – because he has less facial expressions – assumed he is old, or asked why he is using a disabled parking bay. Pictured with Miss Lara 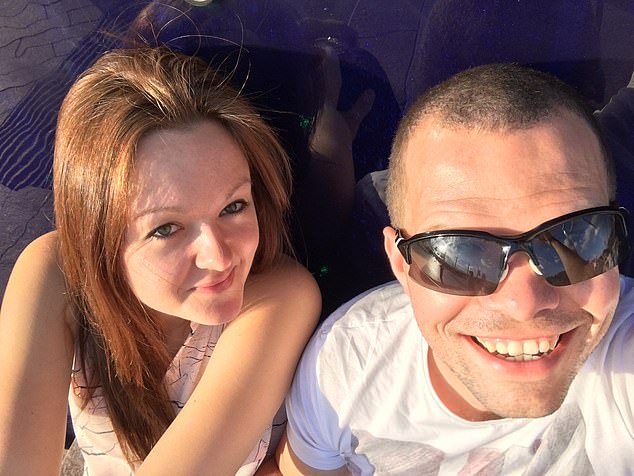 Mr Cameron, pictured with his fiancée Miss Lara, told his story after a survey today revealed 87 per cent of people with Parkinson’s disease have faced judgement or discrimination

Mr Cameron said: ‘It shocked me that I would have this for life, as I knew there was currently no cure.

‘I started Parkinson’s medication straight away. It took a little while to find the right medication for me, and my dosage kept changing. I stopped taking one drug very quickly after I started to have blackouts.

‘Six months after I was diagnosed I became depressed. I was anxious about my future and took anti-depressants for six months. It took about a year to come to terms with my Parkinson’s.’

It was difficult for Mr Cameron to accept that he was unable to do the things he used to be able to do, and as his symptoms progressed, he had to leave his job.

He said: ‘I’ve had to retire from teaching. But although I have Parkinson’s, I’m the same person I was before my diagnosis.

‘I’m getting married to my fiancée Kelly next year, which we’re really looking forward to.’

To help his symptoms, Mr Cameron is currently preparing for deep brain stimulation – a type of major brain surgery which the patient is awake during.

Mr Cameron, who hopes the surgery will improve his symptoms before his wedding day, said: ‘It’s obviously a serious operation, but there are lots of benefits.

‘My advice to others who have just been diagnosed is that it might feel like the end of the world – but it isn’t.’

The findings of the biggest survey of its kind, on more than 2,300 people with Parkinson’s, was published today on World Parkinson’s Day.

Like Mr Cameron, more than half (54 per cent) of people with Parkinson’s have said that people don’t believe they the disease.

Meanwhile, more than half (57 per cent) had cancelled plans or avoided social situations due to embarrassment about their symptoms, or fears about how people may react to them.

Parkinson’s UK has launched a new campaign in a bid to address misconceptions about the condition and reduce the negative experiences of people with the condition.

Steve Ford, chief executive of the charity, said: ‘It’s heartbreaking that so many are cancelling or avoiding social situations due to embarrassment about their Parkinson’s symptoms, or fears about how people will react to them.

‘We hope our new Parkinson’s Is campaign, which sees people across the UK share how the condition affects them, will help fight negative attitudes and correct misconceptions about this much misunderstood condition.’

DR MAX THE MIND DOCTOR: We can all learn the lessons of life in lockdown