A mother whose battle with cancer went public after her scathing letter to the insurer that refused to cover her treatment has died.

Erika Zak, 39, died early Friday after she developed complications during surgery at the Cleveland Clinic in Ohio, her husband Scott Powers confirmed.

‘Our hearts are so broken but we find peace that she left this world feeling hopeful and she is not in pain anymore.’

Her death came after she spent the last five years battling colon cancer that spread to her liver.

Only a liver transplant might have saved her but her insurance company had refused to pay for the treatment.

‘The stars briefly aligned while we were at the hospital for an unrelated medical procedure and an organ miraculously became available right then for transplant. We were so excited and rushed our daughter to spend a half hour with Erika,’ the family said in a statement to New York Daily News.

‘She then quickly went into the OR, but deep into the surgery, her body couldn’t handle some of the trauma apparently. She died in surgery.’

Erika’s story drew national attention after her insurance provider denied her coverage for the transplant. 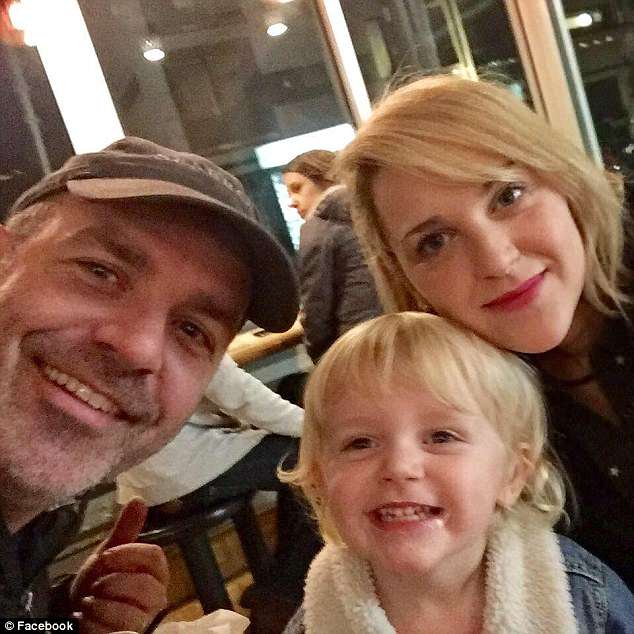 Scott Powers (left) and his wife Erika Zac (right) had been fighting to get her a liver transplant to save Erika’s life from  the cancer she had been battling since their daughter, Loïe was born

The insurer called the surgery an ‘unproven’ treatment – despite a letter from Erika’s doctors insisting that it was not only a valid course of action, but the only shot she would have at survival.

Erika fought back the denials, watching her body fall apart as her liver failed, she told CNN.

Finally, her third and most scathing letter to UnitedHealthcare changed the company’s mind.

The procedure was approved after she wrote UnitedHealth Group’s CEO David Wichmann to let him now about the ‘shockingly incompetent manner’ in which the insurer handled her case.

‘Given that my life hangs in the balance…,’ she wrote in the April 2018 letter, ‘it is unconscionable it has not been undertaken with the level of competence and professionalism anyone would expect of UHC.’

With the prospects of a new liver, Erika thought she had chance at seeing her daughter grow up.

Erika had had only a few healthy months with her girl, Loïe.

Shortly after Loïe was born five years ago, Erika was diagnosed with stage 4 metastatic colon cancer.

Erika was only 34, fighting cancer for the second time in her life and suddenly unsure if she would even live to see her daughter’s first birthday.

Tumors were surgically removed from her colon, and she began chemo treatments.

But disaster struck during microwave ablation surgery that targeted the cancer that had spread to Erika’s liver.

The procedure is supposed to use heat to precisely attack the tumors but something went wrong and a fist-sized hole was cut into Erika’s already-damaged liver. Her bile ducts were ruined, too.

Due to the damage to her liver, she developed dilated blood vessels that frequently bled.

Every sign of bleeding or fever was cause for panic in the Zak household.

Her doctors worried constantly that any infection would kill Erika. 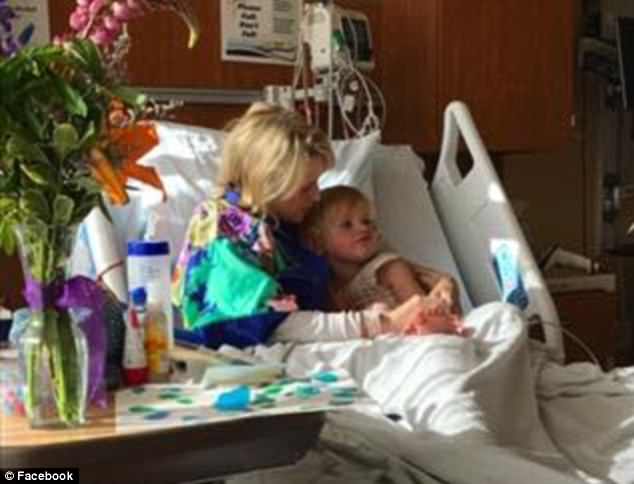 In a last ditch attempt to stop Erika’s cancer two years ago, she was given an experimental immunotherapy, which worked wonders for her.

Every three weeks, Erika traveled to the hospital her her home in Portland, Oregon for the treatment.

She could survive the cancer, but her liver was expected to only get worse.

All 100 physicians that treated Erika echoed the same thing: They didn’t know when, but without a new liver, she would die.

At the beginning of February 2018, she was given the go-ahead from the doctors. They put her on the waiting list for a liver.

It uses microwaves energy to destroy tumors by exposing them very high heat that is precisely targeted.

Surgeons insert a port into the patient near the site of the cancer, guiding the probe to the tumor

But if the ultrasound guidance used to help doctors target a tumor is off, if can easily blast other parts of an organ with heat, potentially destroying them.

UnitedHealthcare, the nation’s largest insurance company, claimed that a liver transplant was not a ‘promising’ treatment for her condition.

Despite her doctors’ claims otherwise, the insurer said that her liver failure was due to toxicity from chemotherapy, suggesting that a transplant would not save her.

Erika was devastated. Feeling as though she had no hope for survival, she started researching Oregon’s Death with Dignity program.

She wrote a sweet, gentle letter to say goodbye to her daughter. But then she penned a very different one to the CEO of UnitedHealth.

The insurer was unmoved, denying her again.

Patients are typically on transplant wait lists for between 12 and 36 months and only 7,000 of the 20,000 Americans on that list are expected to get new livers this year.

Time was running out for Erika to fight, and the insurance company had already delayed her progress by two months.

Then she wrote UnitedHealtcare her scathing letter. 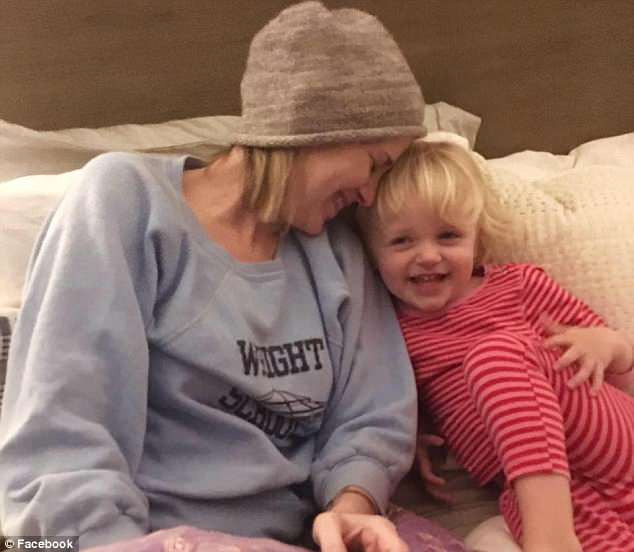 Erika was diagnosed with stage 4 colon cancer just three months after Loïe was born. Immunotherapy was keeping the cancer at bay

As she waited, Erika got sicker, developing a high and persistent fever.

Twice the insurance company set deadlines for when they would finish reevaluating her case. UnitedHealthcare missed both of them.

Dr Andrew Cameron, head of transplant surgery at Johns Hopkins University told CNN that it was ‘exceedingly rare’ for insurance companies to decline to cover a liver transplant.

But Erika’s doctor at the Cleveland Clinic, Dr Federico Aucejo, was one of a very few surgeons who is trying to perform transplants on patients like Erica, who have difficult-to-treat metastasized tumors on their livers from colon cancer.

Outcomes for these kinds of procedures have historically been poor. During the 1980s and 1990s, less than 20 percent of these high risk liver transplant patients survived for more than five years after the operation.

But Dr Aucejo had hoped to change that with a new approach.

When UnitedHealthcare finally called Scott the news was the same as ever: They were still refusing to cover the operation.

‘Honestly, you know that is messed up,’ Scott told CNN he said to the representative that called him.

‘I don’t know who you’ve got to go to, but I would go to someone now and have someone call us, because this is so messed up,’ he said.

Even the representative admitted to Scott that he was surprised by the denial, and did not entirely understand it.

Erika sat by while her husband was on the phone, trying to gather herself. Finally, she grabbed the phone from Scott.

‘Hey!’ she yelled into the phone. 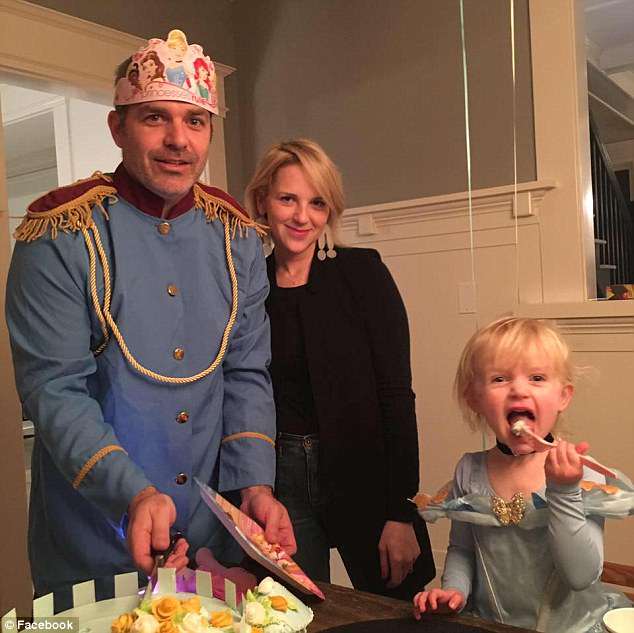 Scott and Erika recently celebrated Loïe’s fourth birthday, but Erika worried it would be the last she would spend with her little girl

‘This is Erika, and you’ve never heard from me before. You don’t know what we’re going through. Because I’m dying,’ she told CNN.

The representative told them Erika and Scott they could send still more information about her case – a familiar line.

In the course of their fight with the insurance company, the couple found out no one had ever even called Erika’s oncologist in Oregon.

On May 7, 2018, Scott got another call from the insurer. UnitedHealthcare had changed its mind, inexplicably, and was agreeing to cover Erika’s transplant.

They quickly spread the word to Erika’s family, friends and doctors, and started packing.

Erika, Scott and Loïe moved to Cleveland, so that as soon as there was a liver for her, there wouldn’t be another moment of delay for Erika.

Liver failure is ranked with a MELD score between six and 40. The closer to 40 a patient is, the more desperately in need of a liver they are and the higher priority they are given on the transplant list.

Erika’s score was around 22. She had months of waiting, and could have taken a turn for the worse and quickly deteriorated.

‘I can’t imagine not being here. It’s not because I keep the family together or anything. It’s just the love I have for them,’ she told CNN.

Loïe asked her mother why she was crying and Erika replied, simply: ‘I’m crying because I love you.’

Erika died early Friday during surgery. A GoFundMe has been set up by the family to pay for her funeral expenses.

Kaftan queen Camilla Franks, 42, will have to remove her ovaries