German scientists found cycling halted the decline of grey matter in hundreds of volunteers with an average age of 52.

But the researchers claimed ‘just about any physical activity that gets your heart pumping’ would have the same effect.

Grey matter shrinks as people age, triggering a host of cognitive problems such as memory loss and trouble problem solving. 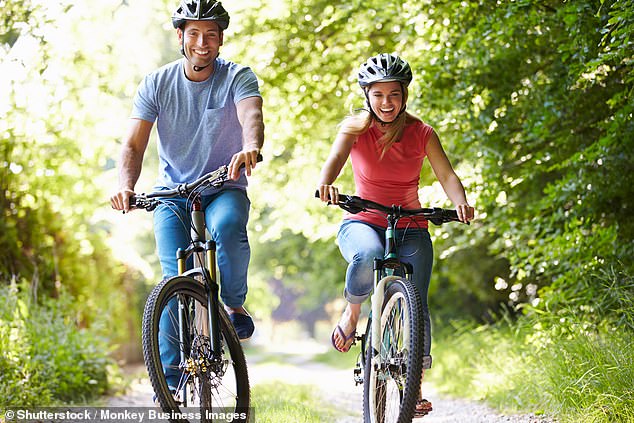 Scientists found cycling halted the decline of grey matter, but said ‘just about any physical activity that gets your heart pumping’ would have the same effect (stock)

This is because arteries become less efficient at pumping oxygen-rich blood to the brain.

Academics claim strenuous exercise, such as cycling, running and swimming, may help because it boosts oxygen uptake.

The researchers recommend two-and-a-half hours of moderate exercise every week to keep the brain as healthy as possible.

The NHS defines moderate exercise as having an elevated heart rate, but still being able to talk, such as brisk walking and tennis.

Researchers based at the German Center for Neurodegenerative Diseases in Bonn looked at 2,013 adults.

They examined them in phases between 1997 and 2012. It is not clear how regularly the tests were conducted.

The scientists, led by Dr Katharina Wittfeld, then cross-referenced the results with MRI scans of the brains of participants.

The team discovered fit volunteers had more grey matter than those who struggled on the exercise bike.

HOW MUCH EXERCISE DO YOU NEED TO DO?

To stay healthy, adults aged 19 to 64 should try to be active daily and should do:

A good rule is that 1 minute of vigorous activity provides the same health benefits as 2 minutes of moderate activity.

One way to do your recommended 150 minutes of weekly physical activity is to do 30 minutes on 5 days every week.

All adults should also break up long periods of sitting with light activity.

An editorial written by non-profit US organisation the Mayo Clinic said the results were ‘encouraging’.

It added the findings also ‘contribute to the growing literature relating to exercise and brain health’.

Dr Ronald Petersen, a Mayo Clinic neurologist, said: ‘This provides indirect evidence that aerobic exercise can have a positive impact on cognitive function in addition to physical conditioning.

‘Another important feature of the study is these results may apply to older adults, as well.

‘There is good evidence for the value of exercise in midlife, but it is encouraging that there can be positive effects on the brain in later life as well.’

Michael Joyner, a  Mayo Clinic anesthesiologist and physiologist, added: ‘This is another piece of the puzzle showing physical activity and physical fitness is protective against aging-related cognitive decline.

‘There’s already good…evidence for this, as well as emerging data showing that physical activity and fitness are associated with improved brain blood vessel function.’

The study was published in the medical journal Mayo Clinic Proceedings.

It is the latest in a growing body of research that has shown exercise to be good for the brain as well as the body.

A study by researchers from Boston University last April found people who do more physical activity – even if it is as light as just walking – slow their brains’ ageing process and are less likely to get dementia.

They found every extra hour of physical activity in an average week corresponded to a brain age 1.1 years younger.

A study by the Federal University of Rio de Janerio in Brazil in January 2019 suggested a hormone released during exercise protected the brain against Alzheimer’s disease.

Irisin is a messenger protein generated by muscle tissue that is carried around the body in the bloodstream.

The team found lower levels of the hormone in the brains of Alzheimer’s patients compared with healthy individuals.

And a 2017 study by the University College London found people over 50 could significantly lower their risk of dementia by exercising regularly.

HOW IS EXERCISE GOOD FOR THE BRAIN?

Many scientific studies encourage people to exercise by touting the benefits it could have on their brains – but what exactly does it do?

In a round-up of recent research, Harvard Health Letter’s executive editor, Heidi Godman, explained it can boost the size of certain parts of the brain, improve sleep and stimulate healthier brain cells.

Research by the University of British Colombia showed people who did regular aerobic exercise – such as running, swimming or cycling – have larger and more active hippocampus regions of the brain, which are associated with learning and emotions.

Other research adds that the prefrontal cortex and medial temporal cortex tend to be larger in people who exercise more often – these regions control thinking and memory.

Exercise can also reduce inflammation (swelling), which can damage cells if sustained, throughout the body, including in the brain.

It can also stimulate the production of growth factors, which are chemicals affecting the health of brain cells and the growth of new blood vessels to provide more oxygen to the organ.

Exercise also helps people to sleep better and have reduced stress and anxiety, all of which have been shown to have positive effects on brain power and mental health.

Type 2 diabetes: Experiencing this problem in your private areas could be a warning