A mother has revealed how her baby girl nearly died twice after a pollen allergy triggered life-threatening asthma attacks.

Lottie Provis was found blue, lifeless and choking on her own vomit in her cot by her parents Kate, 26, and Steve, 31, when she was 18 months old in May 2015.

She was given hours to live when doctors were unable to put her into a medical coma due to her airways being too swollen for the necessary tube to go down.

Medics eventually managed to insert the tube, with Lottie, who is now five and lives in Cardiff, then spending a week in an induced coma.

Thinking she was in the clear, Lottie was sent home, only for another deadly attack to occur just a month later. This time the youngster spent four weeks in a coma and a further fortnight on a children’s ward.

Over the next year, Lottie was hospitalised nine times, before doctors finally made the connection between her symptoms and the time of year.

She manages her asthma with a steroid inhaler every day of summer, but is ‘disease free’ come winter. 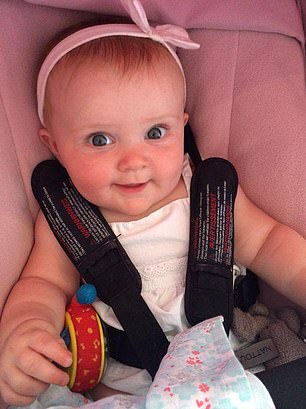 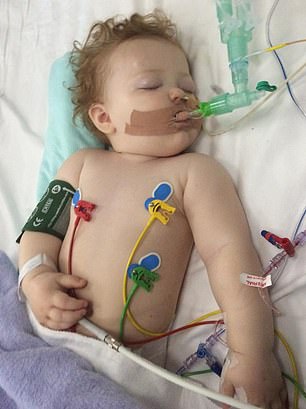 Lottie Provis (left) was found blue, lifeless and choking on her own vomit in her cot at just 18 months old. Doctors gave the youngster four hours to live unless they could manoeuvre a tube down her swollen airways. They managed just in time and she spent a week in a coma (right) 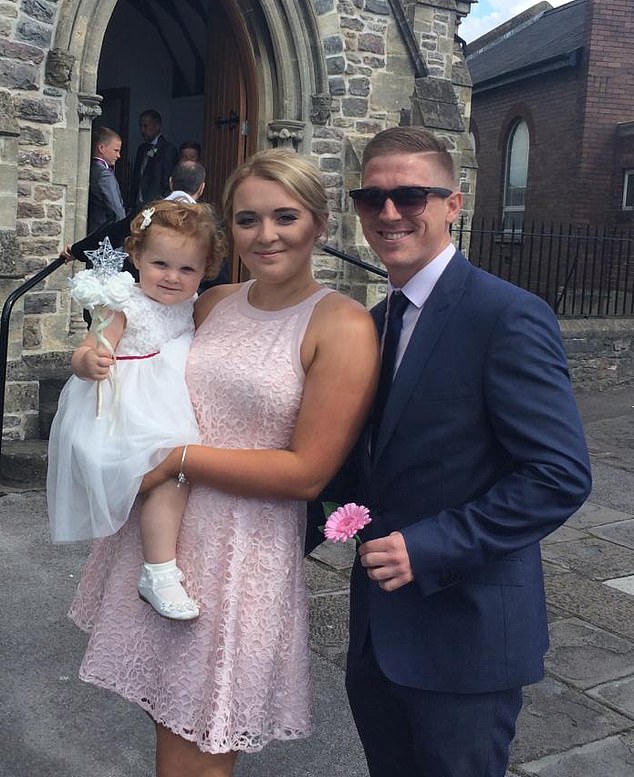 Mrs Provis, a police officer, claims that one morning in May 2015 her husband woke up at 3am and ‘instinctively’ knew he had to check on Lottie.

‘He screamed my name,’ she told MailOnline. ‘I ran in and Lottie was blue. She was also covered in sick and vomit, which was making her choke.’

Looking back Mrs Provis believes her husband – who works in a chemical plant – may have been woken by the sound of their daughter retching.

While her husband panicked, Mrs Provis – who is also mother to seven-month-old Florence – knew she had to stay calm.

‘I went somewhere else,’ she said. ‘I knew I had to ring 999. I was singing the Barney theme song, trying to wake her, but her eyes were rolling back.’

Paramedics arrived within minutes, and gave Lottie oxygen and a nebuliser – a device that allows an asthmatic to breathe in a mist of medication to open up their airways.

‘They told me to keep talking to her because she was reacting to my voice,’ Mrs Provis said. ‘It was absolutely horrific. It was the worst thing I’ve ever been through.’ 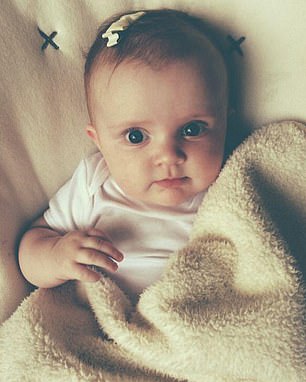 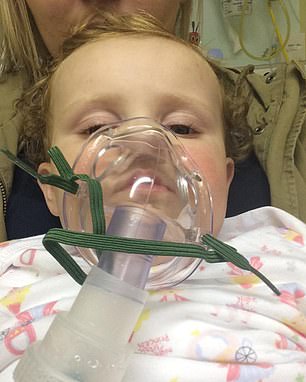 Lottie’s father ‘instinctively’ woke up at 3am on the night of the ordeal and knew he had to check on his then-baby daughter (left). She still requires nebulisers to open her airways (right) 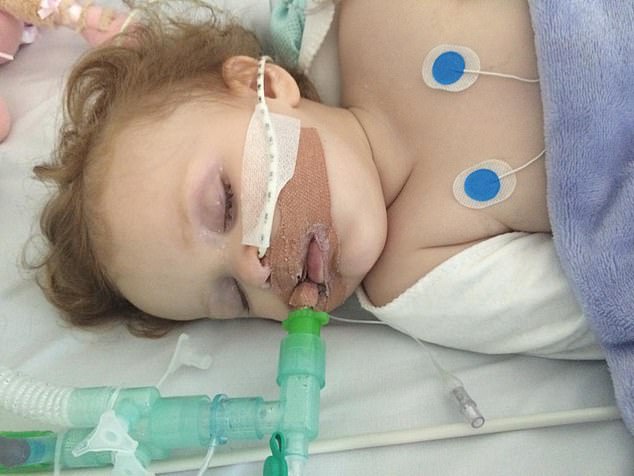 After ‘recovering’ from her first episode, Lottie was sent home, only to turn blue again a month later. This time she spent four weeks in an induced coma and another two on a children’s ward 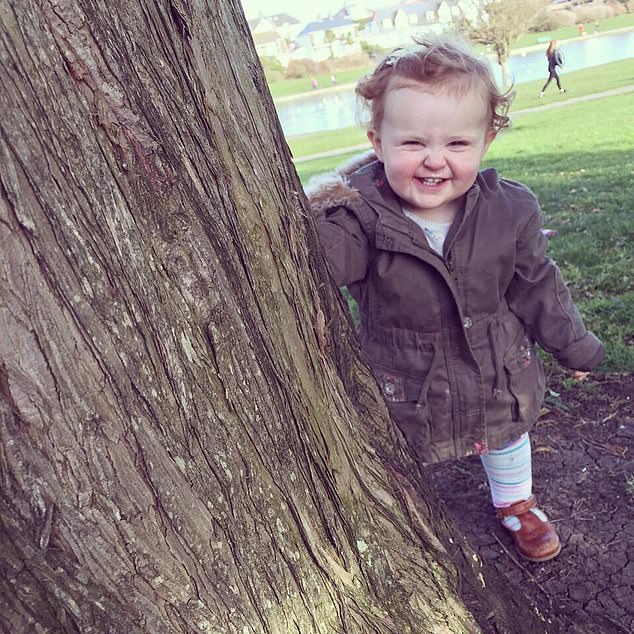 Lottie’s parents noticed she suffered from severe chest infections during summer but was fine in winter. However, it took doctors more than a year to diagnose her with seasonal asthma

Asthma is a common but incurable condition which affects the small tubes inside the lungs.

It can cause them to become inflamed, or swollen, which restricts the airways and makes it harder to breathe.

The condition affects people of all ages and often starts in childhood. Symptoms may improve or even go away as children grow older, but can return in adulthood.

Symptoms include wheezing, breathlessness, a tight chest and coughing, and these may get worse during an asthma attack.

Treatment usually involves medication which is inhaled to calm down the lungs.

Triggers for the condition include allergies, dust, air pollution, exercise and infections such as cold or flu.

If you think you or your child has asthma you should visit a doctor, because it can develop into more serious complications like fatigue or lung infections.

Lottie was rushed to University Hospital Wales (UHW), Cardiff, where things went from bad to worse.

‘Doctors said they needed to put a tube down her throat to put her in an induced coma,’ Mrs Provis said.

‘But her windpipe had closed up because of her asthma.’

Mrs Provis later found out from her mother that doctors had given Lottie just four hours to live.

‘I’m so glad I didn’t know that at the time,’ Mrs Provis said.

Thankfully, a specialist doctor was paged in and managed to manoeuvre the tube down her airways.

After more than 24hours in hospital, the parents were sent home the next evening and told to get some sleep.

But rather than having time to relax, the couple were woken in the night with more devastating news.

‘At 3am we were rung saying Lottie needed emergency surgery to clear the “gunk” from her lungs as they collapsed completely,’ Mrs Provis told MailOnline.

‘It felt like a blur. The whole situation was unimaginable.’

The operation was carried out while the youngster was in an induced coma, which she stayed in for a week.

Lottie then endured a further setback when she suffered an allergic reaction to her morphine, which led to her staying in hospital for an additional seven days. 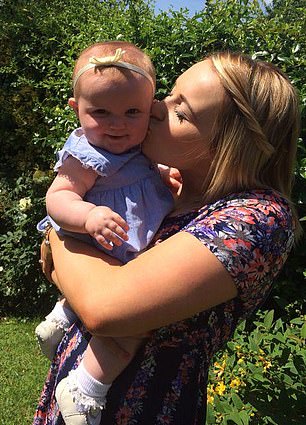 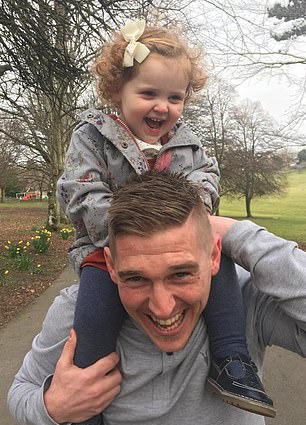 Mrs Provis (pictured left with Lottie as a baby) ‘dreads summer’ and worries what may happen if she is not there. The youngster (pictured right with her father) is at school and ‘doing well’

Believing the worst was over, the parents were finally allowed to take Lottie home but were told to keep an eye on her.

During a holiday to Center Parcs a month later, the family were singing in the car when Mrs Provis noticed her daughter was being unusually quiet.

‘I looked behind and she had gone blue again,’ she said.

Lottie was rushed back to UHW, where doctors revealed she had not been in the coma long enough to recover from her last episode.

The youngster was therefore induced again, this time for four weeks, before spending an additional fortnight on a children’s ward.

Doctors initially thought Lottie may have cystic fibrosis, however, tests came back clear.

Confused as to what was causing her symptoms, medics prescribed the youngster steroid tablets and antibiotics for the next year. However, she still went back to hospital nine times.

It was not until 2016 that doctors made the connection between Lottie’s symptoms and the time of year, with her parents pointing out she flared-up during the summer.

The youngster was diagnosed with seasonal asthma, which she keeps in check with a steroid inhaler every day during summer, but does not require in winter. 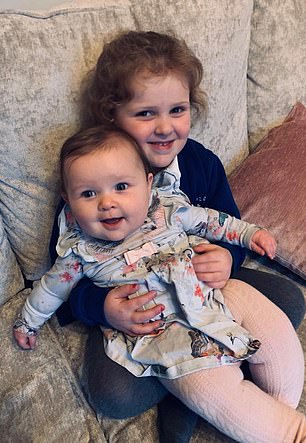 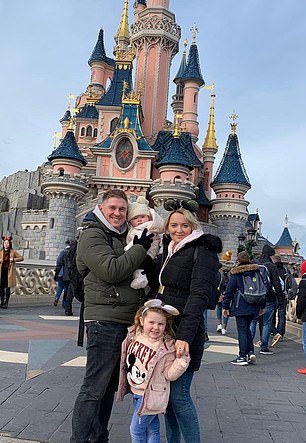 Since the ordeal, Lottie has become a big sister to seven-month-old Florence (pictured together left). The family are pictured right enjoying a break at Disneyland Paris

Although Lottie’s condition is under control, Mrs Provis admits she ‘dreads summer’.

‘I just think what could happen,’ she said. ‘She’s at school and doing really well but I’m always concerned what may happen if I’m not there.’

Mrs Provis is speaking out to raise awareness of her daughter’s condition. ‘I’ve seen how awful asthma can be,’ she said.

‘It’s not just a cold, it’s a really serious thing.’

Mr Provis is running this year’s London marathon in the hope of raising £1,800 for Asthma UK.

Writing on his JustGiving page, he said: ‘Without the help of both the Children’s Ward at Cardiff Heath Hospital and Asthma UK, we would not have our daughter with us today.

‘I would ask you politely to please help me raise money for this fantastic cause and help save more lives like they did with my daughter.’

Is breast milk the next superfood? Companies are racing to produce formula for ADULTS