A mother’s diet during pregnancy could influence her child’s risk of developing symptoms of attention deficit hyperactivity disorder (ADHD), a new study suggests.

While women are often encouraged to eat foods rich in omega-6 fatty acids – like nuts and soybeans – the study found that increased the risk of their children being inattentive and impulsive by at least 13 percent.

Past studies have shown that a mother eating a nutrient-dense diet both before becoming pregnant and while pregnant can affect a child’s metabolic health.

However, the team, from the Barcelona Institute for Global Health (ISGlobal), says its study is among the first to show how the foods an expectant mother chooses to eat can lead to neurodevelopmental disorders. 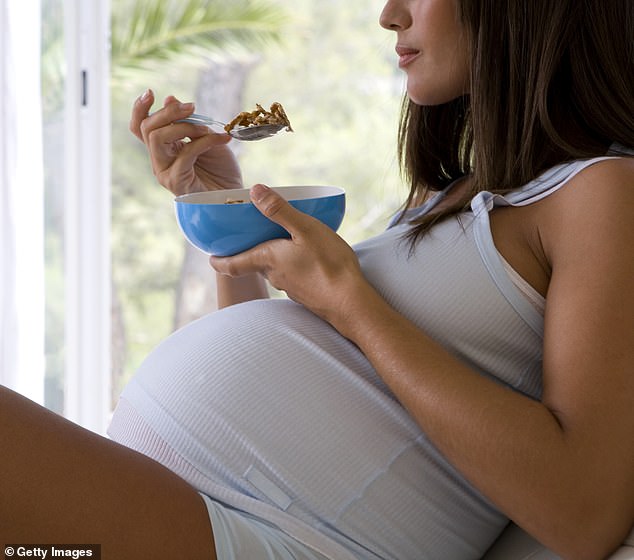 Omega-3 and omega-6 are what are known as long-chain polyunsaturated fatty acids.

The body does not have the enzymes needed to produce them, so they’re obtained through diet from foods like salmon, walnuts, cashews, soybeans and eggs.

Both are essential in maintaining a healthy central nervous system in the womb and afterwards.

Because omega-6s promote inflammation and omega-3s are anti-inflammatory, experts believe a healthy balance is needed.

Past studies have found that children with ADHD have elevated ratios of both omega-6s and omega-3s, but why is unknown.

For the new study, published in the Journal of Pediatrics, the team looked at 600 children who were participating in the INMA project.

Run by several Spanish groups, the project studies environmental pollutants during pregnancy and the first year of life and analyzes the effects on children’s growth and development.

The team assessed ADHD symptoms – including inattention, hyperactivity and impulsivity – with two questionnaires, one filled out by the kids’ teachers at age four and the other filled out by the parents at age seven.

They found that a higher ratio of omega-3 and omega-6 in the umbilical cord samples meant a higher number of ADHD symptoms at age seven.

For every unit increase in the ratio, there was a 13 percent higher risk of symptoms.

A higher ratio of the two fatty acids was not, however, linked to symptoms present at age four or to a diagnosis.

ADHD affects about 10 percent of children under age 18 in the US, and is more common in boys than girls.

Symptoms of ADHD usually begin in childhood and can continue through adolescence and into adulthood.

There is no cure, so treatment currently consists of moderating symptoms via medications, therapy, training or a combination.

‘Our findings are in line with previous studies that established a relationship between the omega-6, omega-3 ratio in mothers and various early neurodevelopmental outcomes,’ said lead author Dr Mónica López-Vicente, a researcher at ISGlobal.

‘Although the association was not clinically significant, our findings are important at the level of the population as a whole.’

Several studies have shown the long-term effects a woman’s diet can have during pregnancy.

A study released just last week from the Washington University School of Medicine found that mouse mothers who ate a high-fat, high-sugar diet while pregnant raised their offspring’s risk of heart problems.

And a 2008 study from the Wellcome Trust found that an unhealthy diet during pregnancy increased a child’s risk of obesity and high cholesterol levels.

‘The nutrient supply during the earliest stages of life is essential in that it programs the structure and function of the organs, and this programming, in turn, has an impact on health at every stage of life,’ said co-author Dr Jordi Júlvez, an assistant research professor at ISGlobal.

‘As the brain takes a long time to develop, it is particularly vulnerable to misprogramming. Alterations of this sort could, therefore, lead to neurodevelopmental disorders.’

Andrea Chernus of Chernus Nutrition in New York City told DailyMail.com that she recommends that pregnant mothers get omega 3 through fish like salmon and sardines.

‘Fish that have shorter lives have less mercury over their lifetimes,’ she said.

She also recommends limiting the amount of omega-6s, which is in high levels in processed foods and in oils like soybean oil and corn oil.

Tammy Lakatos Shames, one half of the Nutrition Twins, also recommends lowering the amount of omega-6s and getting more omega 3s, in moderation.

‘It’s a good idea for pregnant women to take a good fish oil supplement because it had DHA, which is important for the baby’s health and development.’