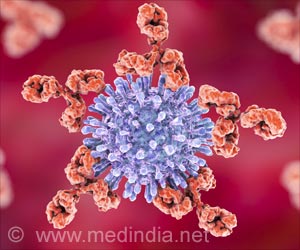 “In the U.S., the alphavirus we worry most about is chikungunya virus, which can cause debilitating arthritis, but we also do see cases of encephalitis caused by Eastern equine encephalitis virus,” said senior author Michael S. Diamond, MD, PhD.

‘The E1 protein will be the key to universal protection against alphaviruses that can trigger brain infections and arthritis.’


The alphavirus group includes more than 30 species, split into two branches. Viruses such as chikungunya, Mayaro, O’nyong-nyong and Ross River, all of which cause fever, rash and arthritis, historically had been limited to Africa, Asia and Europe.

However, beginning in 2013, chikungunya worked its way into the Caribbean and parts of North and South America. The other branch of alphaviruses, found in the Americas, includes Eastern, Western and Venezuelan equine encephalitis viruses and causes brain infections.

Researchers previously identified a group of antibodies that neutralize many members of the arthritis-causing branch of the alphavirus group. But those antibodies didn’t work against all of the viruses that cause arthritis and failed against the ones that cause brain infections.

To find antibodies that would protect against the whole alphavirus group, researchers screened a set of antibodies produced by two people who had been infected with chikungunya virus.

Using mice, they tested each antibody against two alphaviruses that cause arthritis and three that cause brain infections. Both antibodies protected the animals against all of the viruses.

Further experiments showed that the antibodies worked by blocking developing virus particles from exiting one cell en route to infecting another.

The antibodies attach to part of a viral protein called E1 exposed only during the exiting process. Once the virus has fully formed and detached from the cell, the E1 protein is folded into the virus particle and hidden.

Another related paper also reported that antibodies targeting the E1 protein bind to a wide range of alphaviruses, prevent them from exiting cells and protect animals against arthritis and brain infections.

“If we could figure out how to make a vaccine that targets the E1 protein effectively, it would be a cost-effective way to provide broad protection for people in resource-limited places, which is where most alphavirus infections occur,” Diamond said.

It is challenging to make such a vaccine since the target is hidden most of the time. But there are techniques that can be used to make the immune system focus on E1 and generate a good antibody response against it. That’s the next step toward creating a universal vaccine.