While thirty-three per cent of NHS nurses asked to rate their overall mental health and wellbeing described it as ‘bad’ or ‘very bad’.

Only ten per cent of the 3,500 respondents felt they were getting adequate mental health support at a national level.

They described the heartbreak of seeing patients die with COVID-19 without family members around them and admitted it has impacted them.

Medics also fear catching the killer infection and passing it to their family while at work on the frontline, largely due to PPE shortages.

The Government has repeatedly been accused of failing to get enough kit to workers quickly enough, leaving thousands of medics vulnerable. 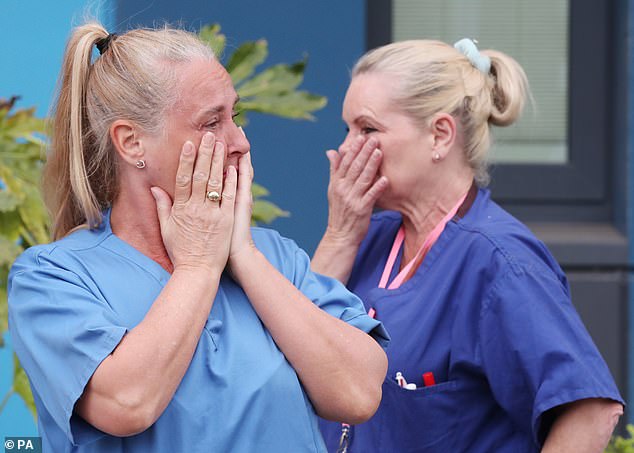 Nine in ten nurses are feeling more anxious or stressed than usual while a third have seen their mental health plummet during the coronavirus crisis. Pictured, nurses at Salford Royal Hospital in Manchester during the minute silence today to pay tribute to NHS staff and key workers who have died during the outbreak 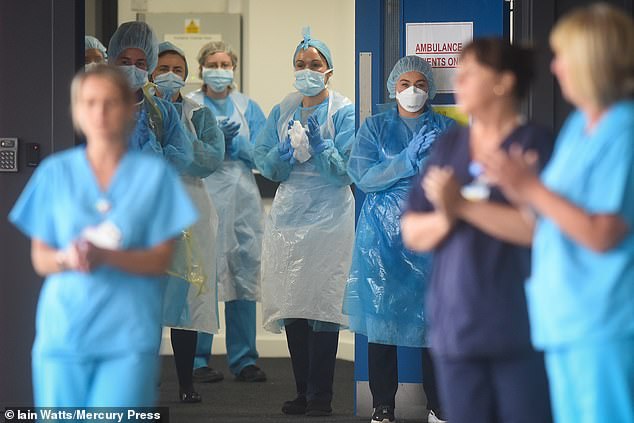 The survey, by the Nursing Times, provides the first snapshot of nurses mental health during the pandemic. Pictured, NHS staff at Aintree Hospital clap after the minute silence

The survey, by the Nursing Times, provides the first snapshot of nurses mental health during the pandemic – which has so far killed 21,678 Britons in hospital.

It found that 87 per cent rate themselves as more stressed at work than usual, while 90 per cent said they were more anxious than before the outbreak.

Concerns about contracting the virus and the health of family and friends, as well lack of sufficient supplies of personal protective equipment (PPE), were the most common reasons respondents gave for being more stressed or anxious.

PPE is vital to reduce the spread of disease inside a hospital setting but also to protect the worker themselves.

One nurse said: ‘If we had the reassurance of testing for the virus and proper protocol in place regarding how to deal with this, then this would help the mental wellbeing of staff.’

Another said: ‘PPE is a real issue of which government does not want to take responsibility for. We should not have to re-use or compromise on safety to ourselves or that of the patient under any cost.’

A BBC documentary last night claimed ministers counted every glove individually instead of in pairs to boast of delivering one billion bits of PPE to NHS staff frontline in their fight against the coronavirus – as yet another minister suffered a shambolic round of interviews today.

The Panorama investigation said Number 10 had failed to procure enough protective equipment, such as masks, gowns and visors.

It also accused ministers of counting 547million gloves individually, instead of as 273.5million pairs, to fiddle PPE numbers.

The one billion figure also included items which are not considered PPE, including millions of cleaning products, waste bags, detergents and paper towels.

It comes as a shocking poll by the Royal College of Physicians (RCP) yesterday found that a quarter of doctors are having to re-use protective kit meant to be worn just once.

The protective clothes should be worn only once because washing them at temperatures high enough to kill coronavirus weakens their effectiveness.

Nearly a third – 31 per cent – said they had not had their facemasks ‘fit tested’ to ensure they provided maximum protection.

Just 69 per cent said they were always able to access the vital long-sleeved gowns. The figure for goggles was even lower at 50 per cent.

Overall 27 per cent said they could not get the equipment they needed, which was up from 22 per cent when the college carried out the same survey three weeks ago.

Some 27 per cent of doctors were re-using their personal protective equipment or had done so.

Its president, Professor Andrew Goddard, said: ‘Many personal protective equipment items are designed for single use and should only be re-used in extreme circumstances.

‘That so many people are having to re-use PPE shows how desperate the shortages are.

‘This is a truly terrible state of affairs. As a bare minimum we expect our health service to provide the equipment we need to protect ourselves and our patients.’

While one added: ‘I believe much of the negative ramifications of COVID-19 has to do with our obvious lack of preparation, by not having or supplying proper PPE, for our frontline workers, which lead to increased anxiety, fear, feelings of disrespect.’

More than 100 NHS workers have died after catching the virus. Workers in other key sectors such as transport are also among those who have died while carrying out their vital work during the pandemic.

Dealing with the death of patients who were unable to be seen by relatives due to social distancing was also distressing for nurses.

One respondent working on a COVID-19 ward said: ‘The deaths are very hard. Sometimes no family members have been able to come either.’

Nurses reported failing to look after themselves by missing breaks or not eating properly due to staffing pressures.

Nursing Times also asked nurses for their views on the current level of support being provided to health and social care staff on mental health and wellbeing, at both national and local levels.

Half of nursing staff considered the current level of support being provided as inadequate.

The picture at local level was slightly better, with 50 per cent rating support as ‘inadequate’ or ‘very inadequate’, 22 per cent thinking it was ‘adequate’ and 13 per cent that it was ‘good’ or ‘very good’.

One respondent stated: ‘Nationally, I do not feel the health and well-being of health care workers has been taken seriously.’

Another respondent said: ‘Far more support is needed for everyone involved in this situation, not only now while it is happening but into the future when it may continue to affect staff.’

Nursing Times editor Steve Ford said: ‘Dealing with the coronavirus epidemic is exacting a heavy mental and emotional toll on the nursing workforce.

‘The short- and long-term psychological impact of working under the conditions resulting from the pandemic is becoming increasingly apparent, and is affecting nursing staff working in all settings.

‘As a result, Nursing Times has launched Covid-19: Are you OK, a campaign to monitor and raise awareness of the mental health impact on nurses of coronavirus.

‘We want to ensure that employers, while they grapple with the crisis facing them from patient demand, also look after their nursing workforce. Failure to do the latter would negate the former.’

It follows the publication of a Chinese study which found a third of medics responding to the outbreak there suffered insomnia.

Staff who experienced sleeplessness were also more likely to feel depressed, anxious and have stress-based trauma, according to the paper published in Frontiers in Psychiatry.

The results are based on self questionnaires undertaken by 1,563 medics online between January 29 and February 3 at the peak of the COVID-19 epidemic in China.

The most important factor for insomnia ‘was having very strong uncertainty regarding effective disease control among medical staff,’ the researchers said.