A ninth generation farmer revealed how he turned his back on meat – and his centuries-old family business – to launch a range of vegetarian products.

Jaap Korteweg, 57, grew up in the countryside of the Netherlands, where his family ran a farm.

In the 1990s his family farm, like so many others across Europe, found itself in the grip of mad cow disease and Jaap was forced to store tens of thousands of animal carcasses. The experience put him off beef and in 1998 he turned vegetarian.

Twelve years later Jaap launched a range of meat-free products under the name The Vegetarian Butcher and now hopes to become the world’s biggest veggie butcher. 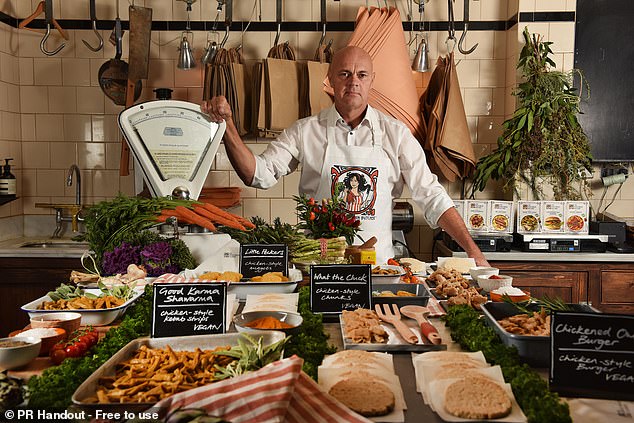 Ninth generation farmer Jaap Korteweg, 57, pictured, revealed how he turned his back on meat – and his centuries-old family business – to launch a range of vegetarian products

Speaking exclusively to Femail, he said: ‘For eight generations, my family owned a farm in the Dutch countryside. I took over my parents’ farming business and switched to an organic agricultural system.

‘When the country was in the grip of swine fever and mad cow disease, I was asked whether I could store tens of thousands of carcasses in my cold storage.

‘Having witnessed this disaster, I realised I couldn’t face the thought of animals going to the slaughterhouse, so I decided to go vegetarian.

‘I did however miss the taste of meat, so I cut it out of my diet slowly – only eating it when I went out for a meal with people, which turned out to be quite often because I missed meat so much.

‘It became clear that I had to find a way to satisfy those cravings, without actually having to eat meat from animals’.

Jaap spent three years searching for the best meat alternatives, and worked with some the The Netherlands’ top meat chefs, including Paul Bom. 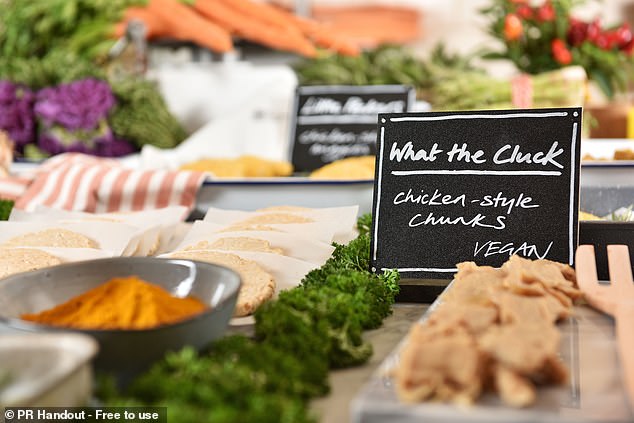 In 2010 Jaap launched a range of meat-free products under the name The Vegetarian Butcher and now hopes to become the world’s biggest veggie butcher. Pictured, veggie ‘chicken’

‘We worked together to create meat alternatives that would give us the same texture and taste as the original, and could work for any meat dish,’ Jaap explained.

‘We opted to use the same equipment as is used for animal meat, which helps us ensure our vegetarian products are as close to the real thing as possible.

‘The end result reflects how the products have been designed to perfectly mimic the exact flavour, texture and experience of eating meat from animals.’ 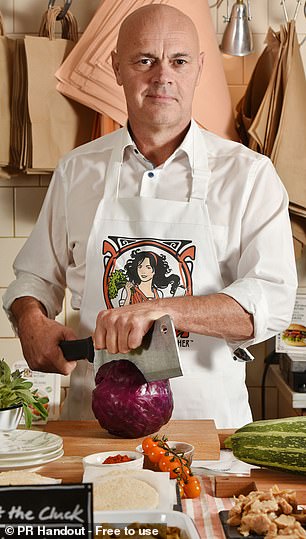 Jaap, pictured, sells a range of products, including meat-free magic mince, no chicken burgers, and even vegan Shawarma

Jaap now sells a huge range of products, including meat-free magic mince, no chicken burgers, and even vegan Shawarma.

He continued: ‘Our products are made by meat lovers for meat lovers – the goal is to encourage meat eaters to enjoy the same great taste, just without the animal.’

‘The biggest obstacle to a plant-based future is meat and dairy substitutes which lack flavour,’ he said. ‘Anyone who tries a poor quality meat or dairy alternative is unlikely to try one a second time.

‘For that reason, my personal mission is to produce meat mimickers that taste as least as good as the real deal. I believe, if you can produce meat made from plants that is at least as delicious, you can change your consumption without changing your tradition.’

The Vegetarian Butcher is backed by Unilever and has approximately 100 employees. The products are sold in 4,000 retailers across 17 countries.

Now Jaap has his sights set on growing the business tenfold.

Reflecting on his growth so far, he said: ‘When I started a crowdfunding in October 2015 to build a Vegetarian Butcher factory, within three weeks pledges maxed out at €2.5 million, the highest amount that can be legally raised through crowdfunding under Dutch law. 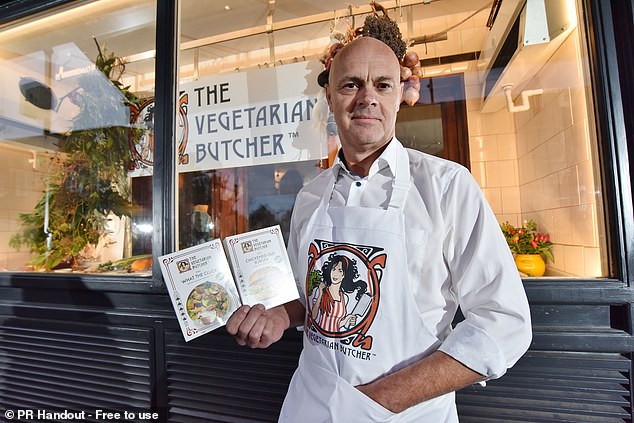 The Vegetarian Butcher is backed by Unilever and has approximately 100 employees. The products are sold in 4,000 retailers across 17 countries. Pictured, Jaap at a store

‘Our breakthrough in the Netherlands has been so overwhelming and turnover has grown so rapidly that our factory is ramping up production to supply the rest of the world.

‘The plan for growing 10 times is to have the same success as we have in the Netherlands across the world, getting listings in major retailers, to encourage and enable the mass population to enjoy our plant based meat, and realise that finally you don’t have to compromise when going meat free.

‘The meat market is huge, there is plenty of room for competitors. I think it’s possible that in 2045 about 80 per cent of meat will be plant-based.

‘The same way horses were once used to pull ploughs and have been replaced by mechanical horsepower, our products will make the need for animals in our food chain a thing of the past. Some say it will be the biggest food revolution of all time! ‘

Want to try a vegan diet but don’t know where to start? Masterchef finalist Joey O’Hare shares her tips

Chef Joey O’Hare wowed viewers on the 2015 edition of Masterchef: The Professionals and is now senior development chef at plant-based meal company allplants.

She explained it is surprisingly simple to get the protein you need on a plant-based diet – and busted myths surrounding veganism. 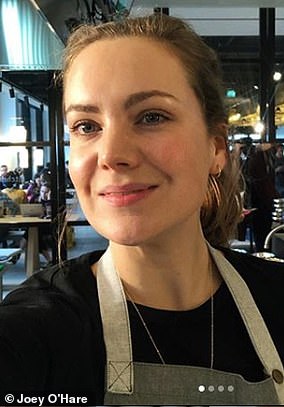 Joey O’Hare, above, said it’s surprisingly simple to get the protein you need

‘Whether you’ve already adopted a plant-based lifestyle or not, there’s so much protein that can be found in plants – from pulses, to peanuts!

‘For me my personal favourite go to is tempeh, because it’s a fermented product and I love that slight savoury tang as well as the nutty texture.’

‘If you stockpile good quality pulses and grains, and stick to buying seasonal vegetables – ideally from a local market – it can be a really cost-effective way to live as well as a delicious one.

BE PLAYFUL WITH FOOD

‘The tastes, flavours and textures you can create when cooking with all plants are endless – whether it’s cooking up fresh portobello and chestnut mushrooms, tossed in sesame oil and roasting really hot to char, to keep their texture chewy and meaty or baking an Oreo Key Lime Pie as a treat!

‘It’s all about experimenting and being playful with food, such as putting spins on British classics – for example using lentils and walnuts in a bolognese, rather than beef, to enjoy with a glass of red wine on the sofa!’

‘My top tip is to treat veggies exactly like meat. If you focus on dry-rubs, marinades, charring and roasting you’ll always end up with awesome, complex flavour!

She added that while a vegan diet can be exciting and full of flavours, people can often fall into traps and eat badly.

DON’T USE IT AS AN EXCUSE

‘One trap is the assumption that a vegan diet is automatically healthy and therefore anything goes.

‘A diet packed of white bread, crisps, margarine and oreos is vegan diet, but it’s far from balanced! Prioritising seasonal vegetables and wholefoods is key, vegan or otherwise.’

US may approve emergency use of Ebola drug remdesivir TODAY

Aging and Your Eyes