Nobel Prize 2021 in Medicine Shared by Two US Scientists 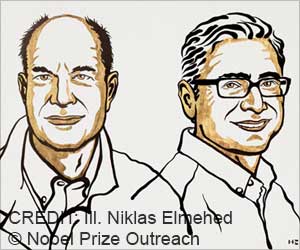 An individual can sense the touch stimulus that is 1,000 times thinner than a human hair. However, the scientific world has been captivated under a box of riddles when it comes to solving the mystery associated with these tactile sensations.

Two US scientists – David Julius and Ardem Patapoutian have been jointly awarded the Nobel Prize in Physiology or Medicine by The Nobel Assembly at Karolinska Institutet on October 4, 2021

David Julius is a professor and the chair of the Department of Physiology at the University of California, San Francisco. He was born in Brighton Beach, Brooklyn, New York in 1955. He holds the Morris Herzstein Chair in Molecular Biology and Medicine. He is also a member of the National Academy of Sciences and the American Academy of Arts and Science. His major work focus is on the molecular mechanisms of touch and pain senses.

Ardem Patapoutian is a professor in the Neuroscience Department of Scripps Research (a scientific research institute in California). He was born in Beirut, Lebanon, in 1967, the youngest of three children in his family, and was later relocated to Los Angeles, US after being captured by armed militants. He studied at UCLA, where he fell in love with molecular biology.

David Julius used a compound from chili peppers – the pungent chemical capsaicin that induces a burning sensation to discover the receptor (cells that act as sensors) responsible for responding to heat in the nerve endings of the skin. Whereas, Ardem Patapoutian utilized pressure-sensitive cells to discern novel mechanical receptors in the internal organs and skin.

“This really unlocks one of the secrets of nature in terms of being one of our senses. It explains at the molecular level how…these stimuli can be converted into nerve signals so that we can adapt. It’s actually something that is crucial for our survival so it’s a very important and profound discovery. We are awarding here a very major, basic scientific discovery of receptors for temperature and touch,” says Thomas Perlmann, secretary-general of the Nobel Committee and Nobel Assembly, who announced this year’s winners.

The breakthrough discovery on these mechanical stimuli of heat, and cold adds a vast understanding of the sensory perception in the nervous system and its interplay in the environment.

Capsaicin has been known to stimulate the nerve cells and thereby cause pain sensations. However, what makes the compound exert such sensations was discovered by Julius. The team explored the millions of DNA fragments in the sensory neurons that react to sensory stimuli like heat, touch, and pain.

It was found that a single gene encoded a novel protein (ion channel protein) that makes the cells sensitive to capsaicin or creates the ability to respond to heat.

This capsaicin receptor was discovered as TRPV1 that was also activated at specific temperatures that are perceived as painful. The finding on the novel TRPV1 receptor helped unravel added receptors involved in the sensation of temperature.

The scientists – Julius and Patapoutian had worked independently to identify another receptor – TRPM8 that was activated by cold sensation. This was done using the chemical substance menthol.

Further to this, a range of temperature sensing receptors was identified. Patapoutian was later set to further explore the receptors that were triggered by mechanical stimuli like touch.

It was found that two mechanosensitive ion channels, named Piezo1 and Piezo2 (from the Greek word for pressure – í; píesi) were responsible for decoding pressure changes on cells and were expressed in higher levels in sensory neurons.

Subsequent work established the clear role of the Piezo2 ion channel in the sensation of touch & proprioception (sense of body position and motion).

Scientific innovation helps one to conclude our understanding of how vital sensations like heat, cold, and touch are perceived by the brain to alert us from potential dangers and help cope with our environment.

The work of Patapoutian and Julius has thereby explained the molecular basis for the sensation of heat, cold, and pressure that adds to the interpretation of external and internal environmental interaction as per the Nobel committee.

The decoded knowledge may also allow the research community to formulate new treatments for various diseases, including chronic pain. This would further evolve the era of pain management in the medical community, thereby benefiting millions of sufferers.