Devices that measure the percentage oxygen in the blood are less accurate in black patients than in white patients, a new study suggests.

In 12 percent of cases, the blood test showed that black patients had dangerously low blood oxygen levels despite the oximeter indicating they were fine compared to three percent of cases among white patients.

The team, from Michigan Medicine, says the findings show that clinicians may have to reply on other tests to ensure that black patients’ oxygen levels are normal and that device makers may need to make changes to their products so all patients are receive accurate readings. 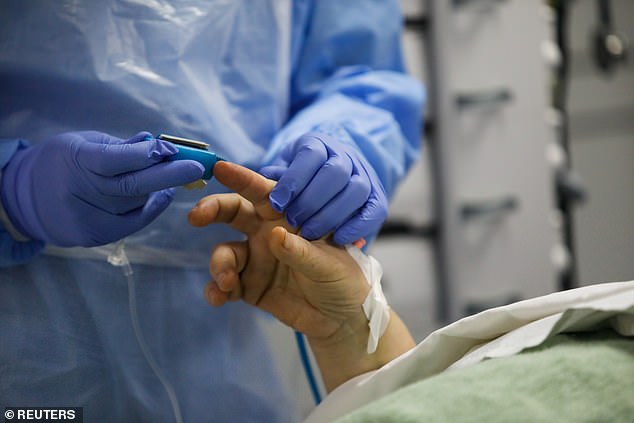 ‘These results really surprised all of us,’ said co-author Dr Michael Sjoding, an assistant professor of internal medicine in the division of pulmonary and critical care medicine.

Pulse oximeters are small devices that clip onto a body part such as a finger.

Small beams of light pass through the blood in the finger, and the device looks at blood oxygen levels by measuring changes of light absorption.

Any reading below 88 percent is generally when clinicians need to intervene.

Sjoding said the inspiration for the study came while he and his colleagues were caring for critically ill COVID-19 patients.

They compared results from pulse oximeters and arterial blood gas measurements in patients who identified as either black or white.

‘We wanted to know: when the pulse oximeter is measuring between 92 and 96 percent, how often is the oxygen saturation actually less than 88 percent on arterial blood gas?’ said Sjoding.

Black patients were four times as likely to have a significant discrepancy in these readings.

In white patients, this discrepancy occurred just three percent of the time.

Scientist have raised questions about whether or not oximeters, when first developed, were tested on racially diverse patients.

A 2005 study found that differences in skin pigmentation led to inaccuracies in pulse oximeter readings.

Another study, from 2007, found that errors were most common among dark-skinned subjects and the least among those with lighter skin.

‘I think we’re going to have to be more cautious about whether black patients are truly getting that amount of oxygen they need.

‘We may need to pay more attention to arterial blood gas results to confirm that the patient is getting enough oxygen.’

Coronavirus US: Data shows which states are testing most and least