Scientists have created a portable machine that can analyse coronavirus swabs and give results in as a little as 20 minutes.

The kit, developed by experts at the University of South Wales, costs less than £100 to manufacture and is currently being evaluated.

It works by analysing a nasal swab for traces of the virus’ DNA, known as a PCR test. It is not an antibody test, which look for signs of past infection.

Britain is still conducting only 20,000 tests a day – despite time quickly running out to meet the Government’s pledge of 100,000 a day. 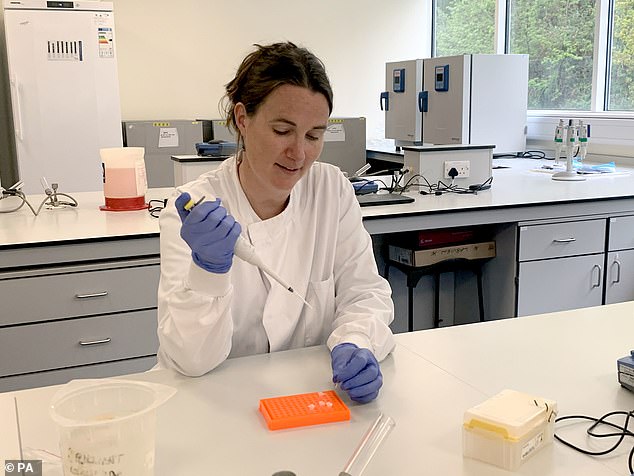 The kit, developed by experts at the University of South Wales, costs less than £100 to manufacture. Pictured, researcher Dr Emma Hayhurst uses the test

SO WHY CAN’T THEY HIT THE TARGET?

By Ben Spencer for the Daily Mail

Why is mass testing crucial?

The World Health Organisation has warned no country should even consider lifting social distancing measures until it has the ability to test every suspected case.

Without mass testing, people with symptoms must simply assume they have the virus and self-isolate, which experts fear they will refuse to do if frustration builds after months of lockdown.

Testing will allow officials to build a ‘contact tracing’ programme – meaning anyone who has been in touch with an infected patient is tracked down and isolated – crucial to avoid a ‘second spike’.

The Health Secretary managed to rapidly expand testing from a few Public Health England labs to NHS labs in every major hospital.

He boosted testing for NHS staff by setting up drive-through centres and creating three ‘lighthouse’ labs.

After a long delay – for which he received much criticism – Mr Hancock also asked private firms and universities to contribute lab space.

There is lab space to conduct 38,000 tests a day – but barely half are being carried out.

This is partly because, having created capacity to test patients and NHS staff, ministers were too slow to expand the scope of programme to other vulnerable patients or front line workers.

Scientists also say there is a shortage of key chemicals and swabs.

For weeks, ministers pinned their hopes on 15-minute ‘antibody’ tests, which would effectively tell someone if they are immune to the virus.

The Government ordered more than 20million of the tests – despite the fact not a single test had been shown to be safe.

None of them worked, and now officials are scrambling to get their money back from the small companies producing the tests.

There is still hope that someone might develop an accurate antibody test – and large, established firms such as AstraZeneca, GSK and Roche are now working on the problem. But it could be some time before they get there.

At the start of the crisis, anyone who had symptoms and had been to a high risk country could be tested, with results within 48 hours.

That policy was abandoned on March 12 when testing was reserved for hospital patients.

Now information is based solely on death rates and hospital admissions of the seriously ill.

To be confident enough to lift restrictions, ministers need to know what’s happening outside hospitals – and that can only happen by reinstating community testing and contact tracing.

It means more than 500,000 tests have now been conducted since Britain began swabbing suspected cases in January.

This equates to around 380,000 people – because often patients need more than one test to confirm they are infected.

It is also 20 times lower than Iceland, which is swabbing around 124 people out of every 1,000 – the highest rate in the world.

The University of South Wales test could help the UK analyse more samples and give results quicker, if they are rolled out at hospitals across Britain.

It would cut the need to send samples to one of the centralised laboratories run by Public Health England or ones set-up in 40 NHS hospitals, which can take several days for results to be processed.

The test and device are being evaluated by Cwm Taf Morgannwg University Health Board and could be in use at its care homes within weeks.

The test is said to use different chemicals to the current accredited test, allowing the university to avoid bottlenecks in the global supply chain.

Shortages of trained staff, swabs and chemicals are thought to be to blame for the UK’s meagre testing programme – as well as the Government’s slow response to the crisis.

However, it is not yet clear which chemicals the machine relies on to analyse swabs. MailOnline has asked the university for clarification.

The machine is based on work previously developed for the diagnosis of urinary tract infections four years ago.

Dr Jeroen Nieuwland, who helped create the kit, said: ‘We have been developing our diagnostic testing platform for the last few years.

‘So we know it works well for other infections. So our work has enabled us to quickly switch it to detect the underlying virus for COVID-19.

‘It is really pleasing to be able to support our frontline health workers, to help detect if they have the virus.’

He added that it would therefore help to ‘either prevent further spread’, or allow staff to return to work sooner.

Colleague Dr Emma Hayhurst said: ‘The really exciting thing is the potential for this technology to be used even wider than with health care workers.’

She added that the test ‘could be used to ramp up large-scale community testing, running potentially hundreds of samples a day in our lab alone’.

‘Crucially it is an affordable device which is simple to use, which should hopefully open up the options available for its use.’

Health bosses have just ten days to increase the number of daily swabs five-fold, if they are to achieve their 100,000-a-day pledge.

Health Secretary Matt Hancock pledged that the UK would carry out the six-figure amount each day earlier this month.

He said laboratory capacity has been ramped up to cater for around 38,000 tests a day, with dozens of private labs offering their services.

But with little more than half this number actually being tested, Mr Gove said it is crucial that capacity is used to its full extent.

It comes after a Nobel Prize-winning economist said the Government should offer a £1billion prize to any lab that can process 10million coronavirus tests a day.

Paul Romer, a professor at New York University, said the huge sum would light a fire under university and private labs to rapidly scale up their swabbing capacity.

Several private labs – which have the capacity to conduct thousands of tests a day – have said their offers to help the Government have fallen on deaf ears.

WHAT IS AN ANTIBODY TEST, AND HOW IS IT DIFFERENT TO A PCR TEST?

An antibody test is one which tests whether someone’s immune system is equipped to fight a specific disease or infection.

When someone gets infected with a virus their immune system must work out how to fight it off and produce substances called antibodies.

These are extremely specific and are usually only able to tackle one strain of one virus. They are produced in a way which makes them able to latch onto that specific virus and destroy it.

For example, if someone catches COVID-19, they will develop COVID-19 antibodies for their body to use to fight it off.

The body then stores versions of these antibodies in the immune system so that if it comes into contact with that same virus again it will be able to fight it off straight away and probably avoid someone feeling any symptoms at all.

To test for these antibodies, medics or scientists can take a fluid sample from someone – usually blood – and mix it with part of the virus to see if there is a reaction between the two.

If there is a reaction, it means someone has the antibodies and their body knows how to fight off the infection – they are immune. If there is no reaction it means they have not had it yet.

Antibody tests differ to a swab test, known as a PCR (polymerase chain reaction) test, which aims to pick up on active viruses currently in the bloodstream.

A PCR test works by a sample of someone’s genetic material – their RNA – being taken to lab and worked up in a full map of their DNA at the time of the test.

This DNA can then be scanned to find evidence of the virus’s DNA, which will be embroiled with the patient’s own if they are infected at the time.

The PCR test is more reliable but takes longer, while the antibody test is faster but more likely to produce an inaccurate result. It does not look for evidence of past infection.

How losing weight could be key to surviving Covid-19