Next time you eat a salad, you won’t be eating it alone.

Those are the hair-raising words of a medical student who has released a shocking video showing the bugs that lurk on your vegetables.

Martin Kaae Kristiansen, 28, used a powerful microscope to discover what lies on the surface of our fresh food.

Mr Kristiansen bought just a few vegetables but discovered an abundance of creepy crawlies, including mites, roundworms, midges and larvae.

Most of the organisms are harmless, but Mr Krisiansen said it highlights the importance of washing your veg before tucking in. 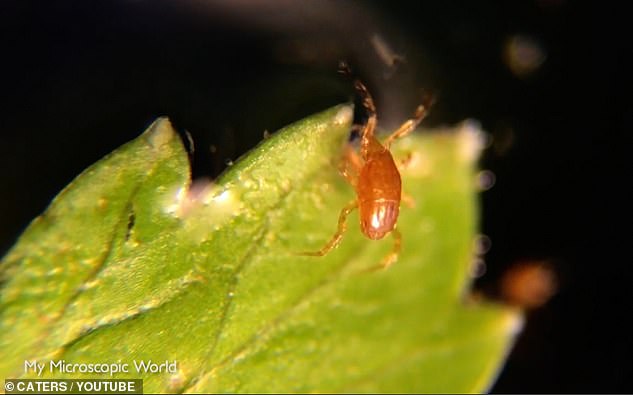 Martin Kaae Kristiansen, 28, used a powerful microscope to discover what lies on the surface of our fresh food, including the most common, midges (pictured) 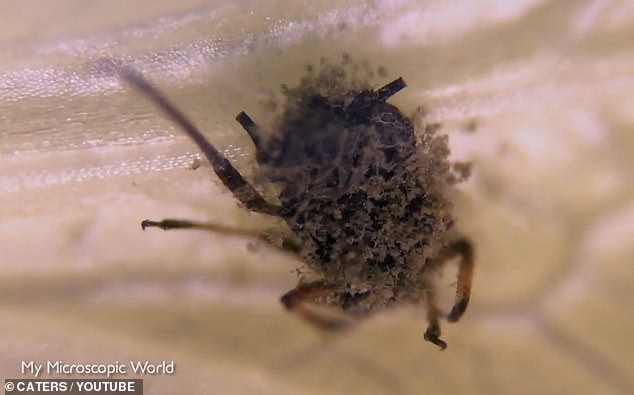 Mr Kristiansen discovered what he called an ‘insect cemetery’ on the vegetables, finding what he thought was dirt to be many dead bugs – some even covered in mould (pictured) 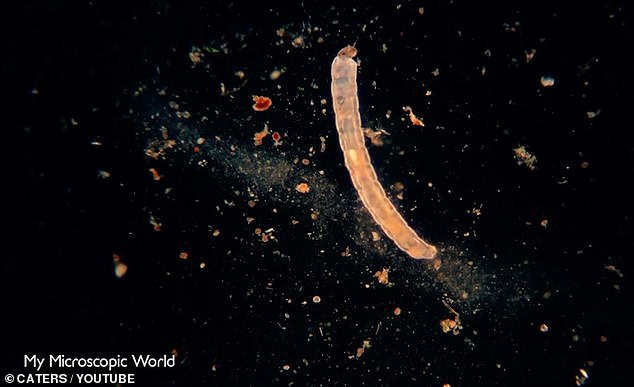 A worm-looking creature was discovered, which Mr Kristiansen said will eventually turn into a flying midge. Adult flying midges can leave an irritating bite on human skin

Mr Kristiansen, who studies biomedicine at Aalborg University, Denmark, said: ‘Most of the organisms are harmless to humans but not all of them.

‘I found at least two of every organisms seen in this video and the samples were only taken from a few vegetables.’

In the four minute clip, the student studied a mixture of common vegetables including carrots, potatoes, celery and leeks.

He found that some of what looks like dirt is in fact not dirt at all – but dead insects.

Mr Kristiansen even described the what he found as an ‘insect cemetery’.

Some were covered in mould, as shown in a gruesome shot, presumably because they had died there a long time ago. 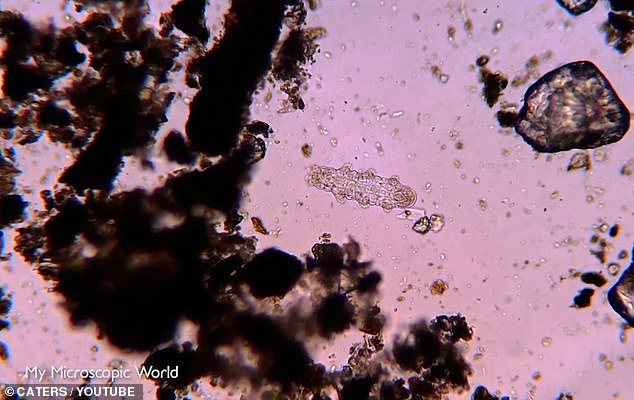 Another organism Mr Kristiansen found thriving on the vegetables was tardigrades (pictured), a water-dwelling animal which can endure high temperatures 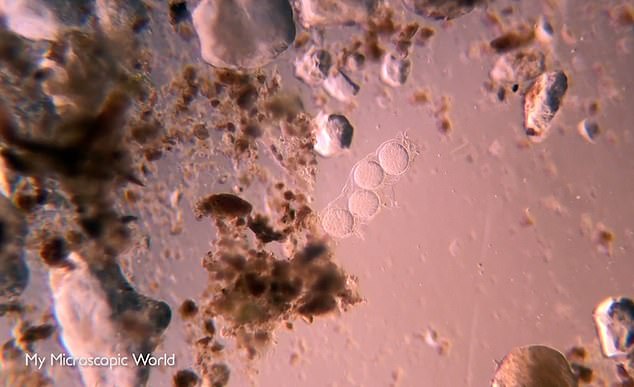 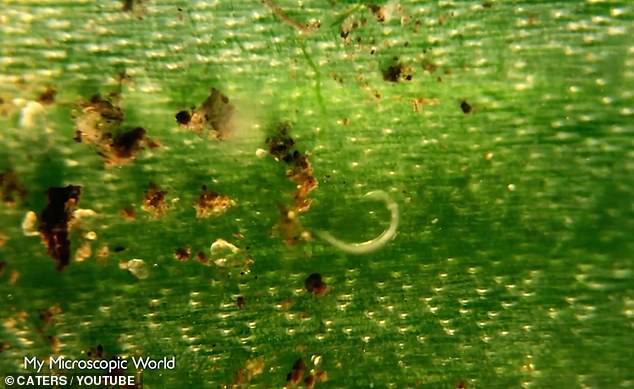 One of the most abundant insects Mr Kristiansen found were roundworms, also known as hookworms and pinworms

One of the most abundant microorganisms Mr Kristiansen found were mites, as well as roundworms, also known as hookworms and pinworms, but scientifically called nematodes.

Mr Kristiansen said: ‘These [roundworms] are human parasites, but the ones found on food are most likely not harmful. Most were living but I also found a couple of dead ones.’

In most cases, an infection from a roundworm doesn’t cause any noticeable symptoms.

If the eggs of the worms are swallowed they can cause stomach pains, nausea and diarrhoea – though, this is rare in the UK.

‘They are known for being able to endure extreme conditions like enormous amounts of pressure, radiation and temperatures from absolute zero to boiling,’ Mr Kristiansen said.

‘So its not surprising that they live on your food and also reproduce.’

The skin of a tardigrade holding four eggs was filmed on close inspection.

Although the organism that is often described as the most indestructible in the world, it doesn’t appear to pose a threat to humans. 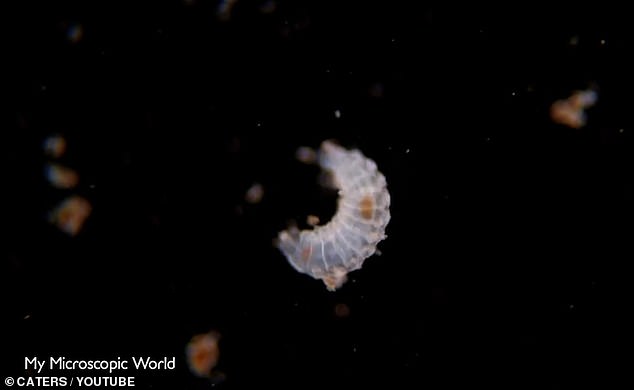 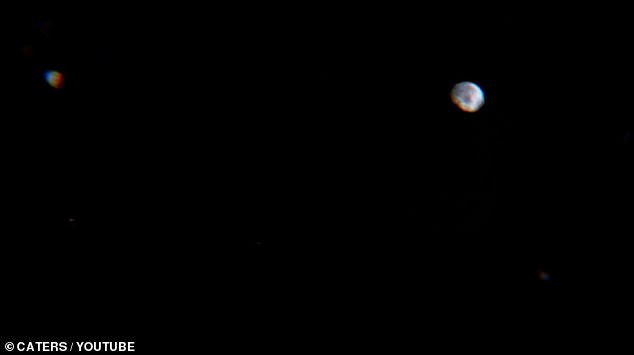 Single cell organisms were also present in huge numbers, maybe only outnumbered by the huge amounts of bacteria living on the food, Mr K said

Another worm-looking creature was discovered, which Mr Kristiansen said will eventually turn into a flying midge.

Adults midge flies are able to bite humans and are known to spread disease in many parts of the world, such as yellow fever and malaria.

Near to the end of the video Mr Kristiansen makes one of his most interesting discoveries, a worm-like larvae which he has been unable to identify.

He said: ‘I have no idea what kind it is, so if you know the answer, please let me know.’

Single cell organisms were also present in huge numbers, maybe only outnumbered by the huge amounts of bacteria living on the food, Mr Kristiansen said.

DO I NEED TO WASH FRUIT AND VEGETABLES?

It is important to wash fruit and vegetables in water before eating them to remove any residue pesticides that are used to control pests and can be detrimental to human health.

Produce is also at a high risk of contamination from dust, dirt and bacteria as most is stored in warehouses, before travelling in containers and being stored again at retailers.

Failure to wash fruit and vegetables can cause food poisoning, such as an E.coli infection.

It is particularly important to wash off any soil as this is usually where bacteria resides.

The Food Standards Agency also recommends people wash produce before use but adds this will not completely eliminate potentially-harmful residues, only lessen those on the surface.

Peeling can be a more effective method, however, this removes fibre and important nutrients, such as vitamin C.

Friends of the Earth claims the best way to avoid pesticides in produce is to eat organic fruit and vegetables.