While supermarkets across the country are seeing their shelves stripped of pantry goods amid the coronavirus pandemic, some savvy shoppers are heading to their nearest Ann Summers to pick up their pasta.

The UK-based sex toy retailer has put its penis-shaped pasta on offer, meaning shoppers can pick up three 200g boxes of the 100 per cent Durum Wheat Semolina for £10.

The deal was spotted by eagle-eyed shopper Claire Hart, who shared the image to Facebook group Extreme Couponing and Bargain UK.

Alongside a snap of the food, she joked: ‘3 for 2 Ann summer’s if anyone gets stuck,’ followed by a series of laughing emojis. 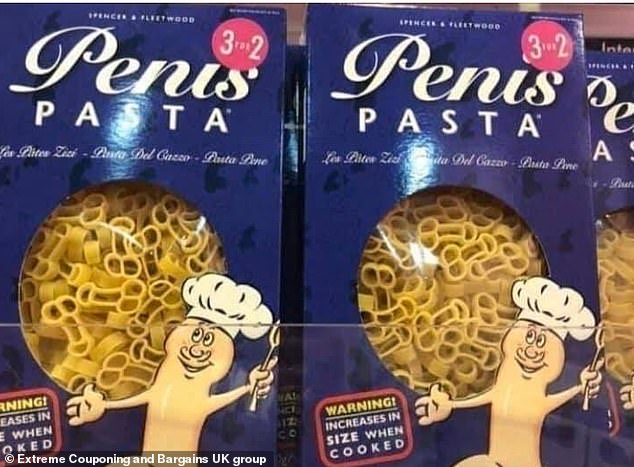 UK-based sex toy retailer Ann Summers has put its penis-shaped pasta on offer, meaning shoppers can pick up three 200g boxes of the 100 per cent Durum Wheat Semolina for £10

And many were quick to take to the comments following the amusing revelation.

‘Penis pasta for the d**kheads stockpiling’ wrote one, while a second penned: ‘If you still can’t find any maybe these are an option!’

A third added: ‘Can you imagine the kids going to school with this pasta, as I bet it’s the only one you will be able to get soon!’ while a fourth added: ‘Just tell the kdis they were trying to make elephant pasta lol.’

According to Ann Summers, their famous ‘Penis Pasta’ is ‘hysterical and completely delicious.’ 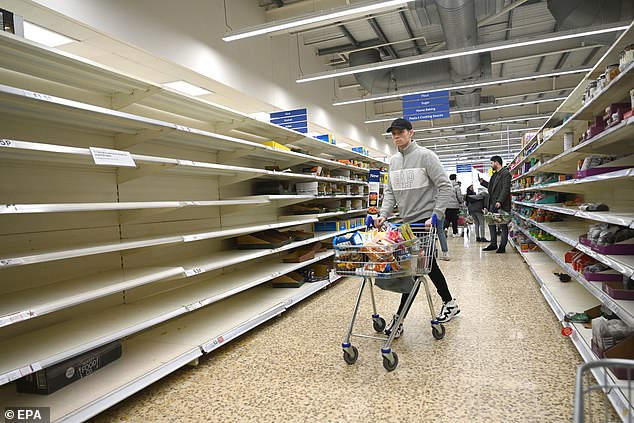 It comes as the shelves of British supermarkets are emptying at pace and staples are being rationed as people stockpile amid the coronavirus outbreak. Pictured: A man pushes his trolley down empty pasta shelves in a supermarket in London

Amused shoppers took to the comments section, with one joking: ‘Be well funny, I might have to pop in there Wednesday’ (pictured)

While usually it’s designed for ‘girls nights in’ and ‘hen dos,’ Facebook users thought it might become more common as shoppers have struggled to get their hands on pasta in supermarkets up and down the nations.

It comes as the shelves of British supermarkets are emptying at pace and staples are being rationed as people stockpile amid the coronavirus outbreak.

Pharmacy shelves are also emptying of paracetamol, ibuprofen and immune-system boosting tablets such as Berocca as people prepare to fight off the flu-like illness that has claimed hundreds of lives worldwide.

Facebook and Twitter is packed with photographs of empty shelves from major supermarkets across the UK where shoppers appear to have thrown empty boxes into the aisles in the mad scramble for items.

Another Twitter user penned: ‘I should think even Ann summers have sold out of pasta. The world’s gone mad!’