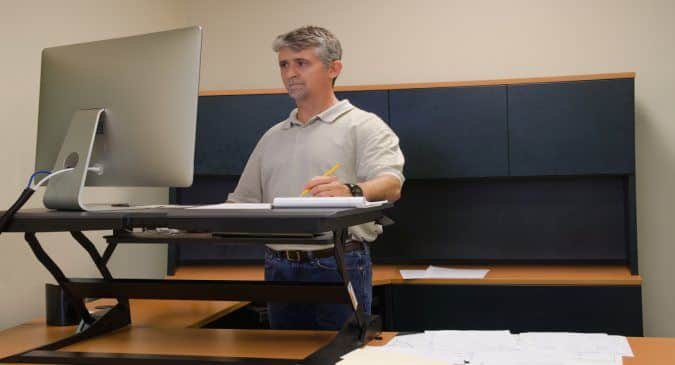 Type 2 diabetes is one of the most common lifestyle diseases worldwide. Increasing your daily standing time may help prevent this health issue. Here’s how…

Insulin is a hormone made by the pancreas that plays key role in energy metabolism and blood sugar regulation. It allows glucose in the blood to enter cells, where it’s used as fuel to function properly. Sometimes the body may not react to insulin normally, leading to rise in the blood glucose levels. This state is referred to as impaired insulin sensitivity or insulin resistance and its usually precedes Type 2 diabetes, one of the most common lifestyle diseases worldwide. Sedentary behaviour and being overweight are known to disturb normal insulin function in the body, leading to decreased insulin sensitivity and increased risk of chronic diseases. Thus, regular physical activity is recommended to prevent these issues.

If you’re not able to meet the recommended physical activity, try replacing a part of your daily sitting time with standing. Because a new Finnish study has revealed that standing more is associated with better insulin sensitivity, which in turn may help prevent chronic lifestyle diseases like Type 2 diabetes and cardiovascular diseases.

In the collaborative study by Turku PET Centre and UKK institute, the researchers found that the association between standing and better insulin sensitivity was independent of the amount of daily physical activity or sitting time, fitness level, or overweight. The results were published in Journal of Science and Medicine in Sport.

“These findings further encourage replacing a part of daily sitting time with standing, especially if physical activity recommendations are not met,” said Taru Garthwaite, a doctoral candidate from the University of Turku, as quoted by Science Daily.

The study also showed that increased body fat percentage has a stronger association with insulin sensitivity than physical activity, fitness, or the amount of time spent sitting.

Garthwaite stated that physical activity, fitness, and sedentary behaviour may be indirectly connected to insulin metabolism through their effect on body composition.

Standing, however, was associated with better insulin sensitivity, irrespective of the body composition. Hence, the researchers concluded that increasing daily standing time may help in prevention of lifestyle diseases if physical activity recommendations are not met.

There is high chance that you could be insulin resistant, but you don’t know about it, as often insulin resistance doesn’t present any noticeable symptoms. So, it’s important that you get your blood glucose levels regularly checked. If you have prediabetes, routinely monitoring your blood sugar or hemoglobin A1C (HbA1c) could help detect if you’ve developed diabetes.

Common symptoms associated with insulin resistance or diabetes include:

In some people, insulin resistance may cause acanthosis nigricans, a skin condition that appears as dark, velvety patches often on the backs of the neck, groin, and armpits. People with insulin resistance are also at increased risk of being overweight, having high triglycerides and having elevated blood pressure.