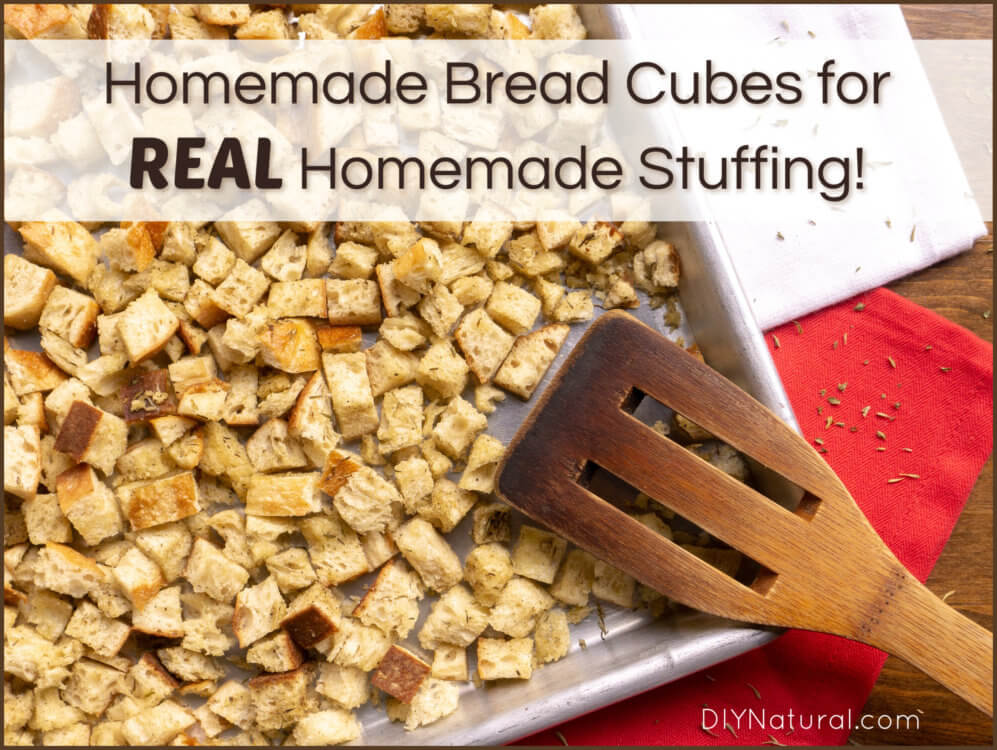 Ever made homemade stuffing from scratch? Not using store-bought bread cubes, I’m talking about even making the bread cubes for stuffing!

Do you call it stuffing, or dressing?

Either way, a roast turkey is incomplete without, it.

I don’t know why I always save stuffing exclusively for roast turkey though. Turkey, chicken, pork, or otherwise, I’d happily eat stuffing with any meal!

Those bagged and boxed stuffing mixes might seem super easy, but once you’ve tasted stuffing from scratch, with homemade bread cubes, you’ll never go back.

Why Make Homemade Stuffing From Scratch?

Aside from having a better flavor and texture, homemade stuffing cubes are better for you than the store-bought version.

When you make your own bread cubes for stuffing, you know exactly what is being added: your bread, seasoning, and fat of your choice.

You can choose the seasonings you want, based on what your family likes. (I’ve given my favorite combo below, but feel free to play with the flavors!)

You can add only as much salt as you want. So if you have family members who are watching their salt intake, this is a great option.

And, you can use better bread! You know the bread going into those bags and boxes is nothing special. But by making your own bread cubes for stuffing you can use bread that you want your family to eat: sourdough, whole grain, sprouted grains, and so on.

What Bread Do I Use To Make Stuffing Cubes?

You can use ANY type of bread for stuffing cubes! It all depends on what you like.

Baguettes or artisan loaves. Sandwich bread or dinner rolls. White or wheat. Sourdough or whole grain. You could even use pumpernickel or rye if you wanted to add a little of those flavors to your stuffing. (Rye and turkey is a pretty stellar combo!)

Many people tend to prefer white or wheat without too many seeds. But I tend to like the nuttiness that seeded bread adds to a stuffing.

Feel free to experiment and see what you like best!

How To Make Bread Cubes for Homemade Stuffing

Making bread cubes for stuffing is quite simple.

Whenever you have bread leftover that you won’t use before it goes stale, cut it into ½ inch cubes and dry it out using the recipe below.

Don’t have a stale bread problem? (We typically don’t in our house.) Simply buy or make a couple of extra loaves specifically for making the cubes. Or grab some day-old bakery bread that is typically discounted because it’s about to go stale. You’re going to dry it out anyway, so it doesn’t matter if it’s not super fresh.

To dry the bread cubes, I toss them with a little olive oil and some seasonings and put them in a relatively low oven. Using low heat helps dry the cubes out entirely without browning them too much. If your cubes are entirely dry, they will last for months in a sealed container in your pantry.

Remember, when making the stuffing, dry bread absorbs more liquid than undried bread. So using dry bread means the flavor of your stuffing will be more robust because the stock, onions, celery, and all other add-ins will really permeate the dish.

Have you tried to make stuffing from scratch? What do you like to put in your homemade stuffing? Share with us in the comments!

Winter Herbs You Can Forage For In Cold Weather

A Chicken Corn Chowder Recipe From My Grandma

How to Make a Delicious All-Natural Corned Beef

How to Make Aluminum-Free Baking Powder!

6 Ways To Help Save Plants That Have Been Frozen