Lidl will remove cartoon characters from its sugary cereal packaging after mounting pressure from campaign groups.

The budget supermarket will get rid of the child-friendly advertisement on eight of its own-brand versions of cereals.

The cereals affected by the move include Lidl’s own versions of Coco Pops, Cookie Crisp, Cheerios and Crunchy Nut Cornflakes.

Animated crocodiles, bees, tigers and monkeys brandished on the front boxes will be removed when the measures are implemented this spring.

However, bright colour schemes, including images of rainbows, will remain on the packaging.

The move comes amid growing pressure from ministers who have threatened to ban products using child-friendly packaging that encourage ‘pester power’.

Lidl will remove cartoon characters from its sugary cereal packaging after growing pressure from campaign groups and ministers. Its Crownfield Rice Snaps, an own-brand version of Kellogg’s Rice Crispies, will have its crocodile character removed 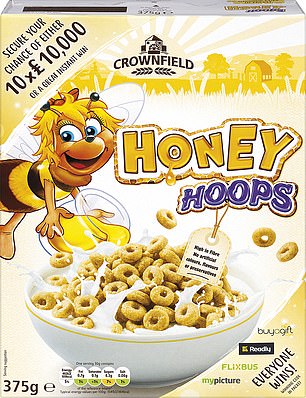 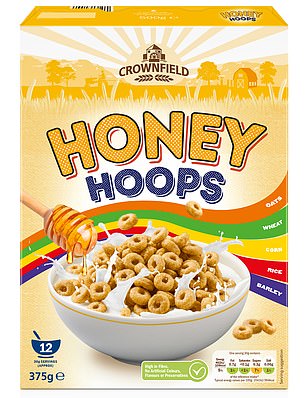 The budget supermarket’s Honey Hoops, a discounted version of Cheerios, will lose its animated bumble bee character. But the bright colour scheme will remain

Breakfast cereals have been singled out as having ‘unacceptable’ amounts of sugar, with numerous surveys finding own-brand products to be the worst offenders.

The NHS last summer urged manufacturers to change what they put in cereals or face a mandatory sugar tax like the one on soft drinks.

Lidl’s Crownfield Choco Rice, its own-brand of Coco Pops, is crammed with 16g of sugar in one tiny 30g serving – not even a third of a bowl.

A 60g serving, which is a more realistic-sized portion, has 32g of sugar – more than three Krispy Kreme glazed doughnuts.

The budget supermarket’s Crownfield Choco Shells, a discounted version of Kellogg’s Coco Rocks, are crammed with 18g of sugar in a 50g portion.

WHICH CEREALS WILL BE AFFECTED?

A serving of whole fat milk could top a child’s entire daily allowance of sugar in one meal.

Tam Fry, chairman of the National Obesity Forum, told MailOnline the decision to remove cartoons from cereals would benefit ‘untold millions of mums’.

He added: ‘Children who throw tantrums in the shopping aisle when they fail to get the packet they want are the scourge of parents.

‘It may matter little what is actually inside the packet: it’s most likely the colourful and attractive cartoon animal on the outside that triggers their desire.

‘Remove the cartoons and kill off pester power at a stroke is the prayer of untold millions of mums. That Lidl is answering that prayer should be warmly welcomed.’

But he said the supermarket ‘will do even better to announce it has stripped its cereals of excessive sugar, too’.

Public Health England recommends children aged seven to 10 should have no more than 24g of free sugars a day – the equivalent of six sugar cubes.

Children aged four to six should have no more than 19g (five sugar cubes). It is recommended that adults have less than 30g of free sugars a day.

There’s no guideline limit for children under the age of four, but it’s recommended they avoid sugar-sweetened drinks and food with sugar added to it. 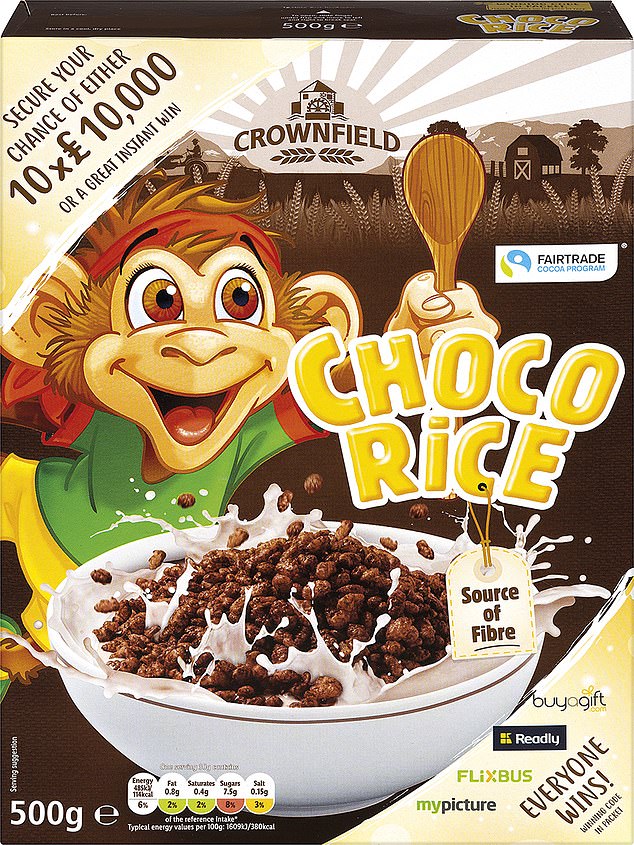 Lidl’s Crownfiedl Choco Rice cereal will also be stripped of its animated monkey. Campaigners praised the move but said more needed to be done to get rid of its high sugar content. The cereal has 16g of sugar in one tiny 30g serving – not even a third of a bowl 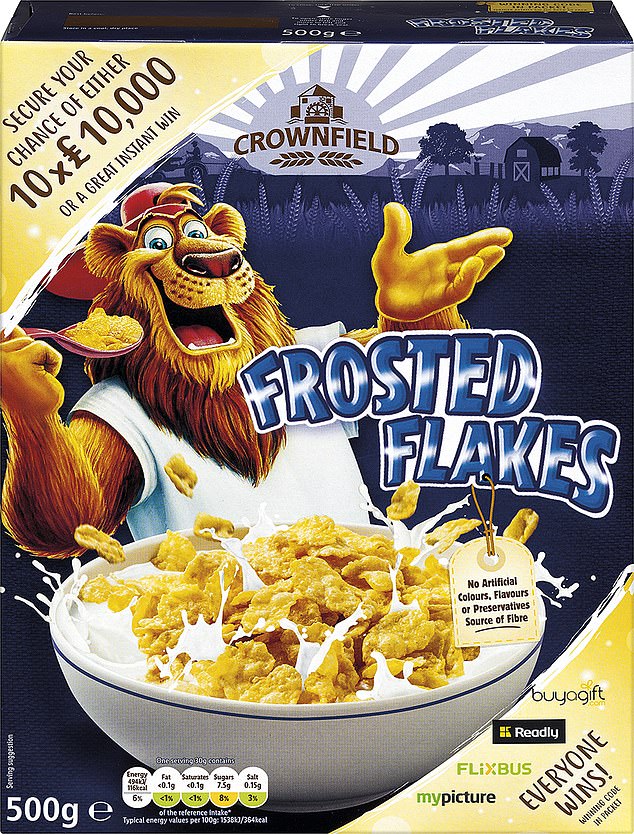 HOW MUCH SUGAR IS TOO MUCH?

The amount of sugar a person should eat in a day depends on how old they are.

Children aged four to six years old should be limited to a maximum of 19g per day.

Seven to 10-year-olds should have no more than 24g, and children aged 11 and over should have 30g or less.

Meanwhile the NHS recommends adults have no more than 30g of free sugars a day.

Popular snacks contain a surprising amount of sugar and even a single can of Coca Cola (35g of sugar) or one Mars bar (33g) contains more than the maximum amount of sugar a child should have over a whole day.

A bowl of Frosties contains 24g of sugar, meaning a 10-year-old who has Frosties for breakfast has probably reached their limit for the day before they even leave the house.

Children who eat too much sugar risk damaging their teeth, putting on fat and becoming overweight, and getting type 2 diabetes which increases the risk of heart disease and cancer.

Children who are obese are more likely to be fat adults and thus be at risk of developing type 2 diabetes, heart disease or cancer.

Official NHS figures show more than 34 per cent of 10 and 11 year olds are currently classified as obese.

A sugary diet is one of the main drivers of obesity and is a contributing factor in other chronic health conditions like heart disease and type 2 diabetes.

Georgina Hall, head of corporate social responsibility at Lidl, said: ‘We want to help parents across Britain make healthy and informed choices about the food they buy for their children.

‘We know pester power can cause difficult battles on the shop floor and we’re hoping that removing cartoon characters from cereal packaging will alleviate some of the pressure parents are under.

‘This latest move underpins our commitment to making good food accessible for everyone and helping customers lead healthier lives.’

The Government has made the ambitious pledge to halve childhood obesity by 2030.

But that target is looking increasingly unlikely, with Public Health England predicting obesity rates to rise instead.

In its latest forecast, PHE said the number of severely overweight primary school children could jump by up to four per cent by 2024.

It comes after the nation’s chief medical officer recommended a host of radical plans to tackle the growing obesity crisis, including a ban on eating on public transport.

A tax on sugar-laden foods, such as puddings, sweets and biscuits, has also been proposed after the success of the levy on sugary drinks.

The levy, imposed on soft drinks in April 2018, has caused the amount of sugar in them to plummet by a third.

The group of MPs also pushed for film or TV characters like superheroes to no longer appear on such foods.

Other recommendations included a ban on junk food adverts before the 9pm TV watershed. None of the plans have yet to be rolled out.

Characters that would be outlawed include Tony the Tiger, the Nesquik bunny on the drink and cereal, Coco the Monkey on Coco Pops and the Honey Monster on Puffs – formerly known as Sugar Puffs.

Marks and Spencer’s Percy Pig sweet range would also be axed as would the Milky Bar kid and the M&M’s characters.

Mr Watson – who lost 7st and reversed his type 2 diabetes with a regime of diet and exercise that included cutting out sugar – accused advertisers of being grossly irresponsible.

The 2008 Healthy Weight, Healthy Lives strategy pledged to reduce the ‘number of overweight and obese children in England to levels seen in the year 2000’, when 15 per cent of youngsters were deemed overweight.

Ministers brought in compulsory cooking classes in school as part of the pledge, and encouraged healthier food choices and physical exercise.

The 2008 Healthy Weight, Healthy Lives strategy pledged to reduce the ‘number of overweight and obese children in England’. But official NHS figures show rates of morbid obesity have almost doubled among Year 6 pupils since the near-£400million scheme was launched

But official NHS figures show rates of morbid obesity have almost doubled among Year 6 pupils since the scheme was launched.

And obesity rates among Year 6 pupils rose by two-thirds in that time, jumping from 77,000 to 121,000, according to the NHS’ National Child Measurement Programme.

It means a third of children are overweight by the time they finish primary school.

Tam fry, chairman of the National Obesity Forum, told MailOnline that officials are ‘too chicken’ to enforce strict measures to tackle obesity.

He said: ‘For some thirty years UK governments have been setting targets to win the fight against obesity but in every case have failed to meet them.

‘Wednesday’s missed target illustrates the lamentable disinterest of ruling politicians in tackling a disease which is costing the NHS £24billion every year.

‘They huff and puff and know full well the tough measures that must be implemented but are too chicken to legislate for them.

NHS figures in October revealed Almost half (44.9 per cent) of all year six children in Barking and Dagenham were considered to be overweight, obese or severely obese in 2018/19. In contrast, the rate was just 23.4 per cent in Richmond upon Thames

‘It is, as if by setting targets, they think the problem will be magicked away. It won’t be.

‘The latest target set this year, to halve childhood obesity by 2030, will have the same fate if tough action is not begun in 2020.’

Mr Fry said mandatory calorie labelling in restaurants, sugar levies and a ban on energy drinks were some of the tough new rules needed to tackle the spiralling crisis.

The Healthy Weight, Healthy Lives project was launched in January 2008 by a Labour government that had been in power since 1997.

Responsibility for obesity was shared between Health and Education ministers, and supported by a large ring‐fenced budget over three years.

Desk plants ‘can calm you down and make work less stressful’