Whether it’s to beat boredom or anxiety, or simply being in closer proximity to the kitchen while working from home, many of us will find ourselves snacking our way through the day during lockdown.

Now a nutrition coach and author has revealed just how all those additional nibbles add up to as many as 8,843 calories a week – as well as the swaps to make to reduce the load.

Graeme Tomlinson, the UK-based author of The Fitness Chef: Eat What You Want and Lose Weight for Life, took to  Instagram to compare two different examples of snacking, revealing how reducing portion size and small tweaks can halve your calorie count.

‘Elimination of milk and sugar in hot beverages may, in the short term, appear insignificant, but prove significant over time⁣,’ he said. ‘And that selection of lower calorie alternatives such as fruit allow one to consume much greater quantities of food whilst also stocking up on nutrients.’⁣ 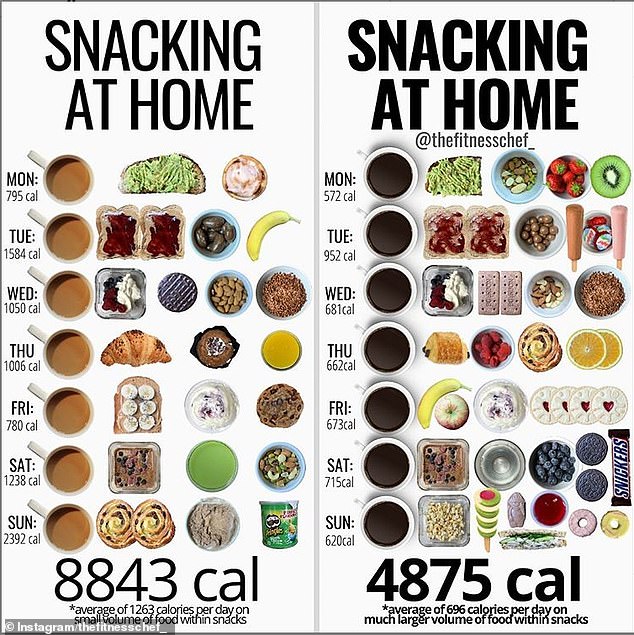 Graeme Tomlinson, the UK-based author of The Fitness Chef: Eat What You Want and Lose Weight for Life has revealed how snacking can add up to an extra 8,800 calories a week, and how to halve your intake 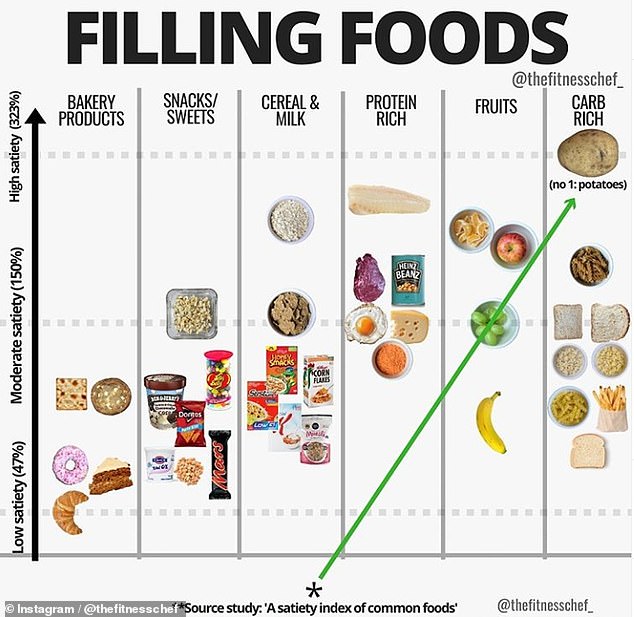 Graeme Tomlinson, the UK-based author of The Fitness Chef: Eat What You Want and Lose Weight for Life, shared this study showing the most filling foods

‘Consumption of your favourite foods is still possible during periods desired caloric reduction amid the snacking temptations of home confinement,’ he explained.

‘And you can increase the volume of food consumed across more snacking episodes to ultimately support an enjoyable, calorie controlled diet.’

In another Instagram post, Graeme revealed that people trying to watch their diet at home should look for the most satisfying foods that will make them feel longer, even if they’re not traditionally considered ‘diet friendly.’

Graeme posted a picture of a chart with the satiety levels of different type of food groups from bakery products to protein-rich choices to carbohydrates, such as bread and pasta.

While bakery products sat close to the bottom of the chart, meaning they would not be enough to stave off hunger for long, the humble potato sat in pride of place at the very top.

‘Unsurprisingly, due to their lack of protein and fibre and easily digested sugars, foods such as pastries, cakes and donuts satiated the least,’ he said.

‘Whilst protein dense foods consistently placed high up on the score sheet. But it was boiled potatoes which placed top, significantly higher than any other food.’

Graeme added: ‘Perhaps the BBC or Channel 4 should take note of this study before they once again compare a potato to several sugar lumps, provoking prime time fear across a nation. ⁣⁣ 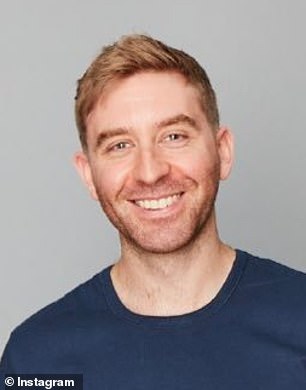 Graeme (pictured) revealed, potatoes should be enjoyed alongside wholewheat foods

‘Additionally, some should consider the value of this study before rendering potatoes to the “high GI” scrapheap of foods never to be consumed in the name of low-carb crusades.⁣⁣’

Instead, he revealed, potatoes should be enjoyed alongside wholewheat carbohydrates as part of a healthy balanced diet.

He says the more satiated someone is after their meal the more likely they will be to avoid excess snacking later.

Graeme told Femail: ‘The study is linked to how full you feel from each meal. A pastry in moderation isn’t bad.

‘People should balance calories, and in an evening have protein and nutrients in meals that you enjoy.

He went on to advise those who are moving less to lower their calorie intakes and potentially avoid the kitchen altogether unless preparing meals to avoid grazing.

But, because of restaurants and takeaways being closed, Graeme said people can now enjoying more meals made up of fewer calories.

‘If you consider overall intake there’s less access to meals out. If these are cut out of the diet there’s more opportunity to eat more at home,’ he added. 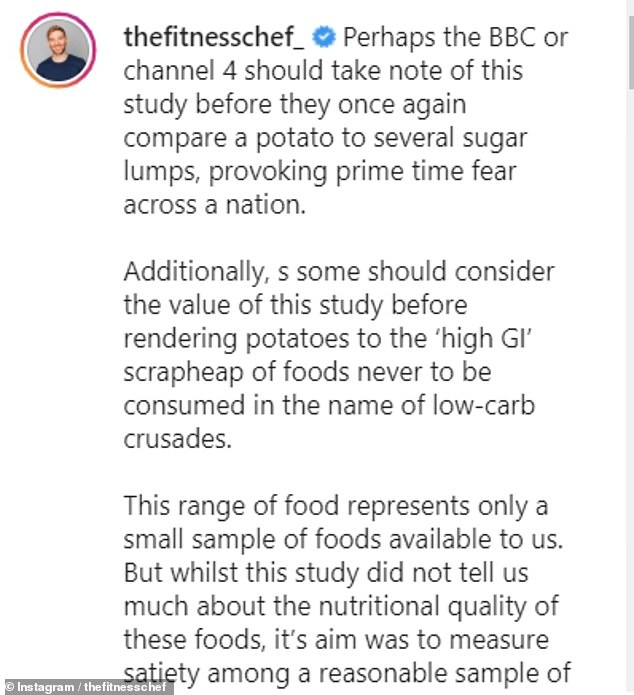 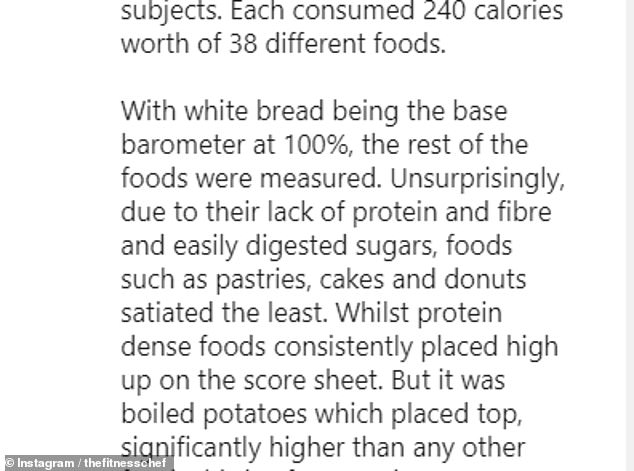 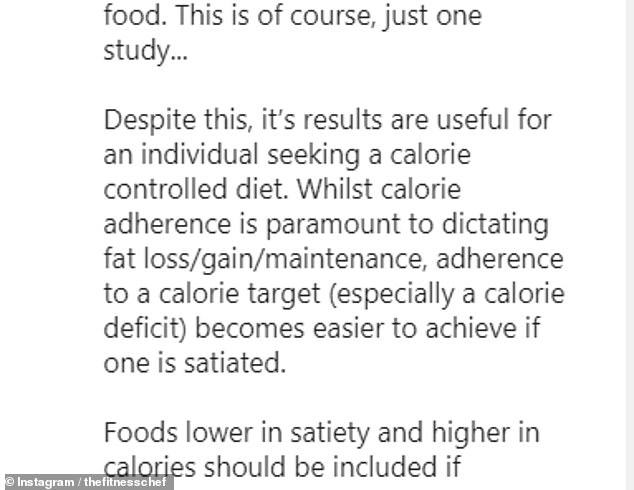 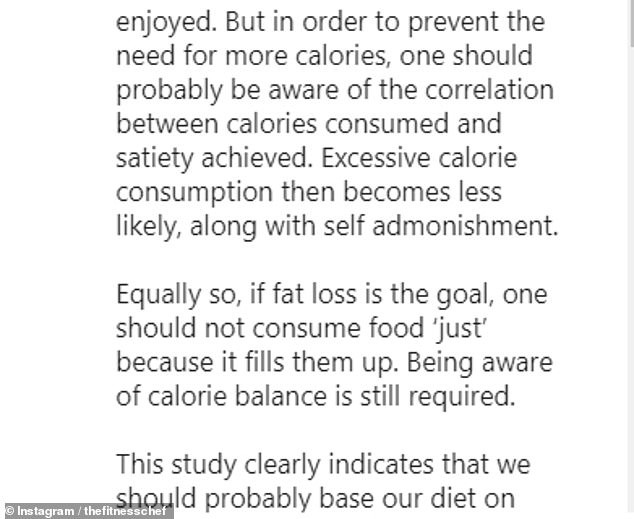 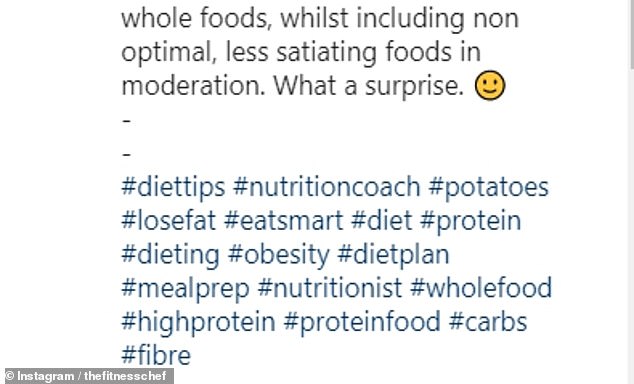 Graeme argues that the more satiated someone is after their meal the more likely they will be to avoid excess snacking later. He posted this caption alongside the image

His post continued, advising people to make sure they’re full when they finish their meals because ‘adherence to a calorie target’ gets easier that way.

He wrote: ‘Foods lower in satiety and higher in calories should be included if enjoyed.

‘But in order to prevent the need for more calories, one should probably be aware of the correlation between calories consumed and satiety achieved.

‘Excessive calorie consumption then becomes less likely, along with self admonishment.⁣’