The most worrying ‘superbug’ on the CDC’s radar has infected more than 600 Americans in recent years – and officials say the spread is picking up pace globally.

But hospitals are not obliged to inform patients if they have the infection, which is most commonly contracted in hospitals, according to an alarming new feature by the New York Times.

Candida auris, a harmful form of yeast, is resistant to most drugs, with a 60 percent mortality rate.

In the US, 300 New Yorkers people have been infected since 2013, 144 in Illinois and 104 in New Jersey, with hundreds more in the UK, South Africa, India, Colombia, Venezuela and more.

The spread, in the face of rising drug resistance, has triggered the CDC to update its guidelines – urging medics to quarantine C auris sufferers.

However, according to the New York Times, CDC rules allow states and hospitals to keep their infection count secret.

The move is intended to protect centers and states from panic and media attention, but experts warn it is leaving the general public in the dark about a serious threat. 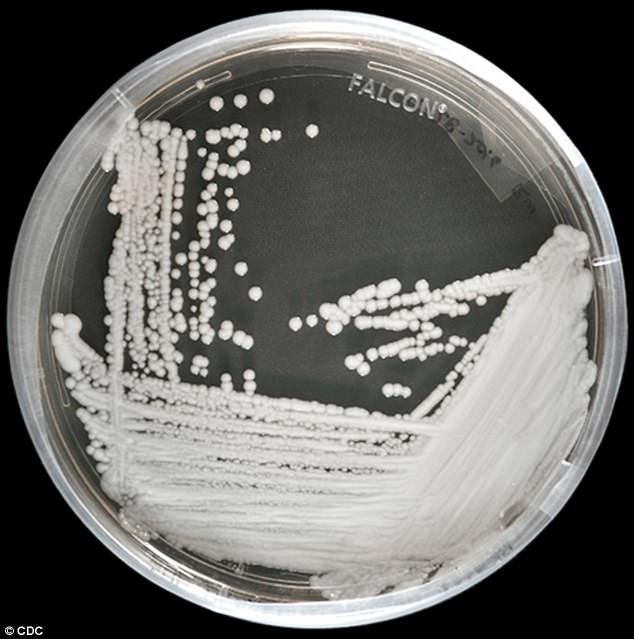 Candida auris, a harmful form of yeast, is ‘pretty much unbeatable and difficult to identify’, according to Connecticut’s state epidemiologist

First identified in Japan in 2009, the fungus has spread to more than 12 countries around the globe.

According to a 2017 report, most cases were spread in hospitals or between family members.

‘In Illinois, three cases were associated with the same long-term care facility,’ the researchers wrote in the Morbidity and Mortality Weekly Report.

‘The case in Massachusetts was linked to the Illinois cases.’

Screening of 390 close contacts showed that 12 percent were colonized by C auris.

WHAT IS C AURIS?

Candida auris (C auris) is a harmful form of yeast, identified by the CDC as a ‘superbug’ fungus.

It tends to be diagnosed in patients after they’ve been in hospitals for several weeks.

The fungus can infect wounds, ears and the bloodstream and take root in the urinary tract.

The source of the infection for C auris isn’t the person who got sick but rather the hospital environment, including catheters, counters, and other surfaces.

It was first identified in Japan in 2009 and has since spread to more than a dozen countries worldwide.

Two of the three kinds of commonly used antifungal drugs have had little effect in treatment.

About 60 percent of those who’ve been infected with C auris have died.

What also makes the fungus so dangerous is that its difficult to recognize and is often misidentified as other related yeasts – many might not determine that they actually have a serious infection on hand.

‘It’s acting like a superbug’ bacteria, said Dr Paige Armstrong of the Centers for Disease Control and Prevention.

The fungus has been found on surfaces in hospital rooms and on the skin of nurses and patients – even after patients were treated with antifungal medications.

The most vulnerable to the superbug are fragile hospital patients, particularly newborns and the elderly.

It tends to be diagnosed in patients after they’ve been in hospitals for several weeks. The fungus can infect wounds, ears and the bloodstream and take root in the urinary tract.

US clinicians have been warned to watch for the fungus in hospitals. Patients who have undergone recent surgery, used central venous catheters, or been hospitalized for lengthy periods, as well as those with diabetes, are particularly at risk.

About 60 percent of those who’ve been infected with C auris have died, the CDC said.

Model ‘was left BLIND’ after her battle with Crohn’s disease

Sirtfood diet: What you can eat on the diet behind Adele’s weight loss – food list