Like  any proud grandmother, Tricia Risbridger loves nothing more than cuddling her two-year-old granddaughter Esmai. The toddler adores listening to music, singing, and playing the xylophone.

But despite these moments of joy that will be familiar to so many, life for the family is a struggle. Esmai needs round-the-clock care since an unexplained seizure shortly after her birth left her brain-damaged.

Tricia is her full-time carer – she has been Esmai’s legal guardian since her mother, Tricia’s daughter, became too unwell to look after her. But she has been refused any home help or respite care by her local NHS provider because the toddler has been deemed ‘too heavy’. 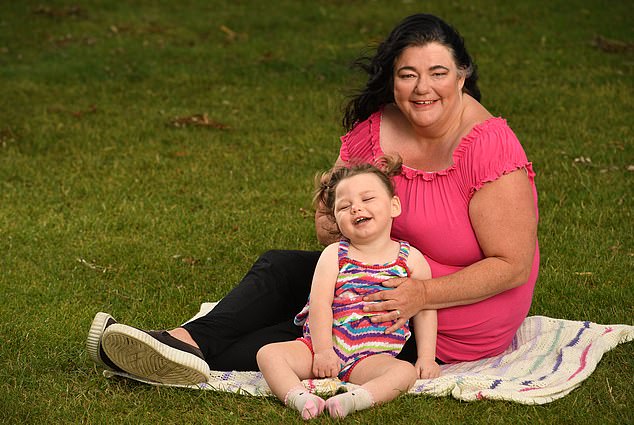 Tricia Risbridger, 43, pictured with her grand daughter Esmai. Health and safety rules have said that at two stone, the youngster poses ‘an unacceptable risk’ to care staff

At just over 2st, Esmai is not much bigger than an average child of her age. But health-and-safety rules dictate that trying to help carry or move her poses an ‘unacceptable risk’ to care staff.

And so Tricia, 43, and her husband David, 56, a mechanic, who have a three-bedroom house in Poole, Dorset, are given no assistance whatsoever.

Tricia, who has three other children at home, says: ‘The local health team have assessed us and agreed we need assistance, day and night. But everything Esmai does requires lifting, and because care staff aren’t allowed to do it, they can’t even come here. It’s a crazy situation.

‘We have to carry Esmai upstairs to bed, our bathroom is upstairs and is tiny and doesn’t have any room for a hoist as it simply isn’t big enough.

‘She has a special buggy, which weighs more than she does, and is difficult to lift up and down the stairs to our front door – which means going out can be very difficult. We took Esmai on because we love her but we never get a break. We could just do with a little bit of help sometimes.’

Esmai’s needs are complex. She is fed via a tube and cannot sit unaided or grasp toys. Her seizures are so severe she is rushed by ambulance to hospital at least once a fortnight. 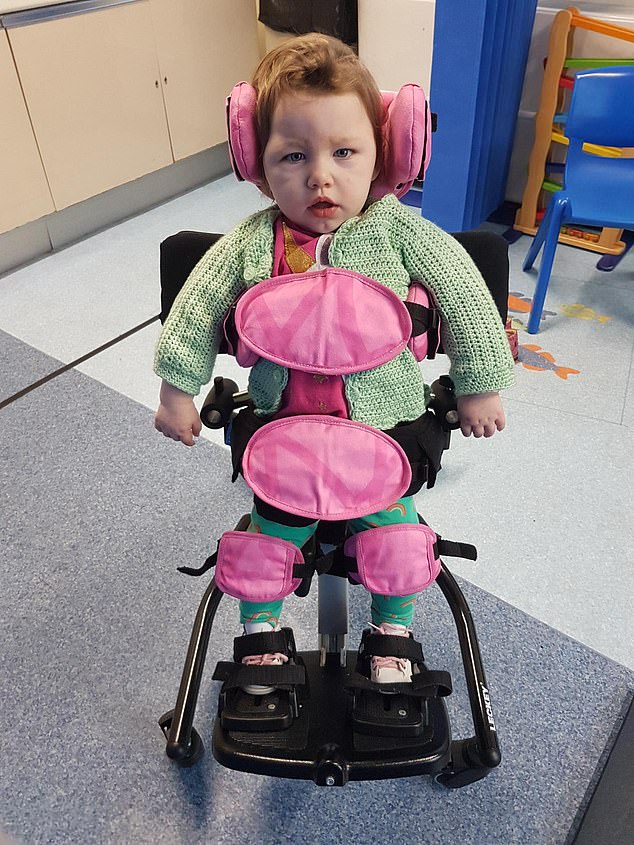 Esmai, pictured, was born with cerebral palsy, needs around-the-clock care, but official guidelines say female care staff should not lift any weight of more than two-and-a-half stone – including any equipment

By law, she is entitled to support at home under the Children and Young People’s Continuing Care Framework. Designed specifically for youngsters with complex health needs, this can entail anything from round-the-clock help from specialist nurses to weekly visits from a care team, depending on the decision of an independent assessor.

Yet Government health and safety guidelines state that female care staff should not be expected to lift a weight of more than 2½st – which includes the weight of the child and any equipment they need.

The Royal College of Nursing endorses these guidelines.

So Tricia has been told that until their home is adequately modified with lifts and winches – which it cannot be, for structural reasons – she will receive no help at all with Esmai.

‘We’ve been told it’s because they can’t provide care that is “safe and effective”,’ says Tricia. ‘But we are utterly exhausted.’

Two weeks ago, The Mail on Sunday launched its Dignity For The Disabled campaign and revealed the plight of young patients – some in their 30s – with conditions such as multiple sclerosis and those caused by brain injuries being dumped in old people’s homes. 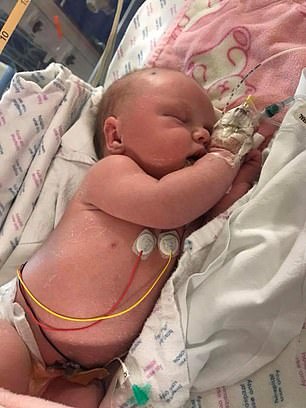 Ms Risbridger, who is her granddaughter’s official carer, has been told she will not receive any assistance until her home in Poole, Dorset has been modified to cope with Esmai’s disability

Now, we reveal the shocking reality for many disabled children across the UK. Support is withdrawn simply because at-home carers are not allowed to lift them.

Patsy Hallmey, co-founder of charity The Dorset Children’s Foundation, says Esmai’s situation is ‘quite simply unacceptable’. She adds: ‘We have a multitude of families in similar situations.’

Tricia and David’s only option is to move to a flat or house specially adapted for Esmai’s needs provided by a local housing association. They have been on the housing register for almost a year. Bournemouth, Christchurch and Poole Council told us the family’s case is of the ‘highest priority’.

Esmai’s situation is not unique. There are almost 800,000 disabled children in the UK, 99 per cent of whom are cared for at home.

Danni Jones, 26, and partner Sam Stevenson, also 26, have been left struggling – after the care support for their son Noah was withdrawn eight months ago when he became ‘too heavy’. The six-year-old has a rare genetic disorder called pontocerebellar hypoplasia. He can’t talk, walk or eat normally and suffers sleep apnoea, which makes his airways collapse while he sleeps.

Danni and Sam, an operation manager for a delivery firm, take it in turns to stay awake every night while Noah sleeps to make sure he doesn’t stop breathing. The couple, also from Poole, relied on carers to help with this. But when Noah reached a weight of almost 4st, and a height of 4ft 3in, and stairlifts used to assist him kept breaking, the care team deemed him too big for the carers to lift him and workers were forced to stop visiting.

Have you suffered disability discrimination?

Tell us your story at [email protected]

‘Noah’s condition is life-limiting, meaning we know that we don’t have long left with him,’ said Danni, who has another son, Ruben, who is three. ‘We want to make the most of it but it’s so hard when we are exhausted all the time.’

Clare Dangerfield, campaigns manager of disability charity NewLife says: ‘What is happening to these children is a national tragedy. Housing authorities and the NHS are pushing the problem to one another. They say it’s not our budget, not our problem. We hear of mothers carrying 14-year-olds up and downstairs unassisted just to bathe them. It’s a travesty.’

Is a little help for these dedicated parents really too much to ask?

Life is not easy for parents of disabled children. Caring for a child with exceptionally complex needs can be challenging, frustrating and physically and emotionally exhausting – but as Tricia Risbridger so simply puts it, she loves her adopted daughter Esmai and wants to do the best for her.

She could just do with a little help sometimes. Is that too much to ask? Well, clearly it is.

It is astonishing that parents who already face seemingly insurmountable obstacles on a daily basis should have what meagre support is on offer snatched away because of health and safety concerns. Of course, workers should be protected. But to refuse care because a child is ‘too heavy’ to lift?

Of course, at the heart of this problem is housing. Disabled children need to live in accessible houses. Things like ramps, winches and lifts mean heavy lifting is not required so often – and would mean care workers would be able to go about their jobs safely.

Housing regulations put in place last year require developers to build homes that meet the needs of disabled people. There is a dire shortage. Parents we have spoken to have been waiting for somewhere suitable to live for months, even years. This has to change.

Alfie Dingley, one year on after he changed the law on medicinal cannabis