On Thursday, President Trump insinuated that he would throw his weight behind the Florida governor’s proposed plan to help keep drug prices lower by importing medications from other countries.

It might be good for prices, but with recent reports of fake foreign drugs and widespread contamination in blockbuster medications manufactured abroad, it’s not clear the drugs themselves will be good for patients.

The Food and Drug Administration (FDA), for its part, has warned against that plan, arguing that cities and states that have imported drugs from Canada have wound up with ‘misbranded’ and ‘unapproved’ drugs.

And generic blood pressure medications produced in China have exposed millions of Americans to carcinogenic chemicals – suggesting the FDA’s warnings could have merit.

Still, Americans are paying about four times as much for their drugs as Canadians are.

One policy expert says that as long as the US federal government refuses to set prices, drug prices will continue to escalate, in spite of Trump’s declaration of war on Big Pharma and programs to fight it (whatever they may be). 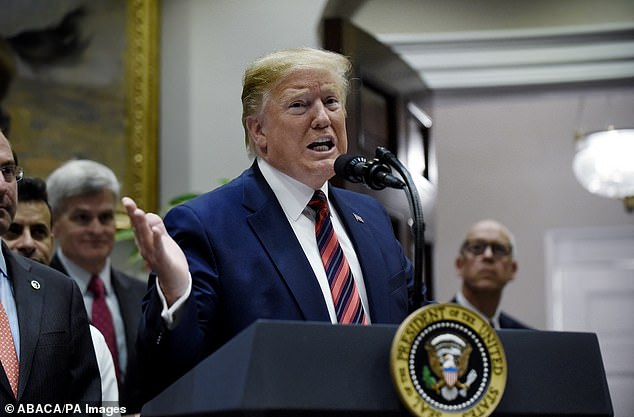 Speaking at the White House on Thursday (pictured), Trump threw his support behind Florida’s proposal to import cheaper drugs from Canada – but an expert says that plan has been tried and failed in Massachusetts

For some brand name prescription drugs, US consumers pay as much as 7,000 percent more than people in countries like the UK, Canada and Japan.

During the 2016 campaign and throughout his presidency, Donald Trump has promised to send drug prices into a veritable free-fall.

That hasn’t happened, and accomplishing it is difficult, to say the least.

For starters, the government – whether headed up by Trump or anyone else – doesn’t control US drug prices.

In the UK, the National Institute for Health and Care Excellence (NICE) advises the National Health Service and the two tightly regulate whether drugs are priced according to their effectiveness, though the government doesn’t directly set prices for brand name drugs.

In the US, drug prices are determined by a complicated private dance between drug companies, health insurance companies and pharmacy benefit managers that liaise between them.

The US Department of Health and Human Services – the umbrella under which federally subsidized insurance sits – isn’t invited to that table, so there are three private entities arguing over the drug prices with no one representing the public.

‘Who are the ones really causing this pricing?’ wonders Rosemary Gibson, a JAMA Internal Medicine editor and author of China Rx: Exposing the Risks of America’s Dependence on China for Medicine.

‘I found a the lack of transparency on pricing to be a very deep black hole, and that’s not acceptable.’

Canada’s government does directly set prices, limiting how much any drug company can make on sales there.

All of that means that a drug company gets a hard cut-off for their earnings potential coming out of Canada.

We may allow states to buy drugs in other countries if we can buy them for a lesser price, substantially less price, and that is going to be very unique
President Donald Trump

But in the US, such a company can make their case that their research and development has gotten more expensive, or their drug has improved, and push its price upward in the often closed-door price negotiations.

In an effort to circumnavigate the US system, Florida passed a a bill last month that would permit its citizens to import certain prescription drugs, directly, from Canada, where they are more affordable. The state’s governor, Ron DeSantis, is expected to sign the bill.

President Trump seized on Florida’s idea at the White House Thursday as an appealing pathway to his promised drug price slashing.

‘We may allow states to buy drugs in other countries if we can buy them for a lesser price, substantially less price, and that is going to be very unique,’ he said.

‘But we will allow them to go to other countries because the drug companies have treated us very, very unfairly, and the rules and restrictions within our country have been absolutely atrocious.’

Several other states, including Colorado, have introduced similar bills.

But we’ve been here before – or at least on Massachusetts city has, back in 2007.

Former Mayor of Springfield, Massachusetts, Michael Albano, set up a program by which municipal workers there could buy drugs from just across the border.

It didn’t last long, because pharmacies there claimed they received threats from drug companies, saying they would throttle distribution, they told 60 Minutes.

A few years prior to that, GlaxoSmithKline made similar threats against Canadian pharmacies selling across borders, according to the Wall Street Journal.

And it isn’t clear that anything has changed in the last decade that would incentivize these countries to act any other way.

In fact, some – including Senator Bernie Sanders – have argued that the FDA’s adamant warnings against the dangers of contaminated, fraudulent or unapproved drugs just gives these companies a credible reason for threatening foreign pharmacies that sell to the US.

The FDA warned in February that CanaRx was selling ‘unapproved, misbranded and unsafe’ medications to the US.

Some questioned the FDA’s motives and whether it was being played by Big Pharma.

On the other hand, sometimes drugs made abroad really are dangerous.

Look at the recall of blood pressure medications. There was a 30 percent increase in price because [after the recalls] there wasn’t enough valsartan to go around
Rosemary Gibson, author of China Rx

Millions of Americans have been exposed, in recent months, to carcinogens that were the byproduct of the way Chinese manufacturers were producing them.

As the supply chain for drugs has become international, the FDA has had to start inspecting manufacturers around the world, but they’re at a disadvantage doing so because the plants are often warned ahead of time and the agency’s authority is limited in those countries.

‘That is another reason that prices go up: because of poor quality,’ says Gibson.

‘Look at the recall of blood pressure medications. There was a 30 percent increase in price because [after the recalls] there wasn’t enough valsartan to go around.’

Generic drugs can be made by any company, so Chinese manufacturers are in a ‘race to the bottom,’ to make and sell the largest amount of the drugs made most cheaply, says Gibson.

And they can and will do exactly that better and faster than any other country on Earth, Gibson says, which gives them powerful control over the worldwide drug market.

She’s documented this influence over penicillin.

‘Chinese companies got together and dumped product penicillin on the global market and it drove out all the US, European and even Indian [companies],’ Gibson said.

Then competitors were out of business, and the ‘cartel’ of Chinese companies could hike the price again, Gibson says.

The US remains legally fairly powerless to stop this – or any of the vicious cycles driving up drug prices.

‘I think it’s very hard for the government to move because there are a lot of actors that will stop anything in its tracks,’ says Gibson.

‘There is no one advocating or the American consumer for insuring we have high quality medicines, especially those made in countries with high quality producers.

‘No one is advocating to bring manufacturing back to the US where we could pay fair prices, not [have] a race to the bottom.’

Ask the GP: Is my cold to blame for my lack of smell?