Taking acetaminophen – sold under the brand name Tylenol – may make it harder for us to feel happy for other people, new research suggests.

The common drug belongs to a group of analgesics that relieves pain – though we aren’t really sure why.

Previous research confirmed that when acetaminophen is helping us feel less of our own pain, it makes us less empathetic to the pain of others.

Now, a followup study from Ohio University shows that the drug also makes us feel less empathetic toward the positive, pleasurable experiences of others. 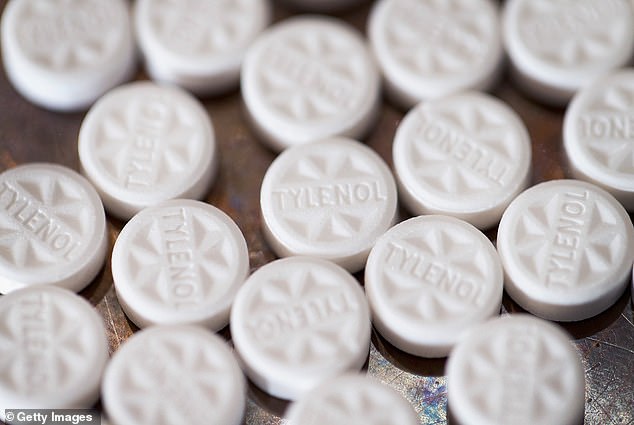 Acetaminophen – also sold as Tylenol (pictured) and Paracetamol – reduces activity in parts of the brain that help us feel the pleasure of others and empathize with them, a new study finds

Painkillers are designed to address physical aches and pangs.

But our experience of pain is every bit as psychological as it is physiological.

And since we can’t pop a pill to instantly heal a wound or mend a broken bone, analgesics aim to interfere with how we respond to pain, vis a vis the neurochemicals that communicate pain signals and inflammation.

But acetaminophen is special, and still poorly understood.

The latest theories suggest that the the drug may target endocannabinoid system (the one that responds to marijuana) and serotonin receptors.

However it works, acetaminophen does work, and is the third-leading over-the-counter painkiller.

In recent years, scientists have made much better progress in solving the empathy mystery.

They have identified a number of brain areas that are instrumental to our emotions and motivation, and are thought, therefore, to be involved in empathy.

Some previous research has suggested that these areas might not only be important to the experience of ‘feeling another’s pain,’ but also to positive empathy, of the empathetic experience of another’s pleasure.

These areas, some neuroimaging studies have shown, are less active after someone has taken acetaminophen.

So the researchers at Ohio University hazarded a guess that acetaminophen would not only reduce empathy for others’ misfortune but for their happiness, too.

To test this theory, they gave half of their 114 study participants a placebo drug and gave half of them 1,000 mg of acetaminophen – the equivalent of a standard dose of Tylenol Extra Strength.

Then, they showed the participants a series of four scenarios of groups of men and women having some form of ‘positive experience.’

Study participants had to rate how much the people in the scenarios appeared to be enjoying themselves, how much pleasure they themselves were feeling and how empathetic they felt toward the scenario cast.

The participants on acetaminophen could still see that the people in the scenarios they were shown were enjoying themselves.

But they rated their own pleasure and empathy lower than the control group did.

Cognitive empathy allows us to see and name the emotions others are feeling – like seeing how happy the people depicted in the study scenarios were.

Affective empathy, on the other hand, allows us to feel the emotions others might be having, and for those same emotions to be triggered in us.

So, it would seem that acetaminophen left cognitive empathy intact, but had the same dulling effect on people’s own emotions – which are key to empathy as a whole – as it did on their experience of pain.

‘I’m still surprised about the striking psychological effects of such a common painkiller such as acetaminophen,’ said Dr Dominik Mischkowski, a professor of psychology at Ohio University.

He also conducted the previous research on negative empathy and acetaminophen, however, and says he suspected the drug would have similar effects on positive emotions.

Dr Mischkowski added: ‘Given that an estimated quarter of all US-American adults consume a drug containing acetaminophen, this research really matters.’

It may be that 81.8 million of us who grabbed some Tylenol from the medicine cabinet are numbed out to our pain, emotions, and the feelings of others at any given time, according to this research.

Are YOU kidding yourself in bed? Survey reveals 75% of us think we’re better than average